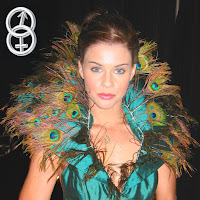 For longer than any of us know or can remember, men and women have displayed their marital status by wearing a gold band or some reasonable facsimile thereof.

As we tiptoe into the 21st century, a new symbol has been created to alert the general population of our marital status – the Shi symbol.

Whether it is same sex or man/woman, one can discreetly tell people what they are looking for in a significant other, well at least in terms of gender.

The SHI symbol was conceptualized by Trevor Byng who with a clutch of friends realized that dating could be made so much simpler if one’s “status” was recognizable to others. So, in 2007, in Perth, Australia, the SHI signature symbol was born and since that time, there have been additional symbols to include male/male and female/female. In case you are wondering what SHI stands for, well it is simply Single, Happy, Interested.

So, in 2010, we have an accessory which is trendy and stylish as well as informative. What started out as a simple pendant has evolved into everything from that pendant to cuff links, to bracelets, to earrings and even into items of apparel. Now think of the possibilities that wearing “SHI” can cause, maybe even the significant other of your dreams.
Posted by FASHION BY THE RULES at 7:58 AM