Anyone who says they have only one life to live must not know how to read a book. ~Author unknown

Buy a book and live another life ... get lost in fashion 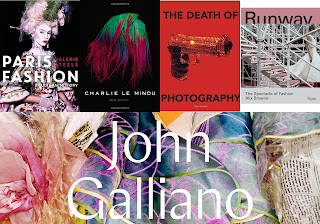 Posted by FASHION BY THE RULES at 6:40 AM No comments:


Inhabiting a rather rarefied genre of photography sits a real deal of that art form ... Rick Day. It might be safe to say that any male model who has come along within the last couple of decades considers it an honor as well as a rite of passage to be lensed by this man. Rick Day has surely created a visible palpable standard for those involved in the business of models. An image created by him in a model’s book, when being viewed, might even be considered a stamp of approval or possibly a silent signal of having “arrived” at a particularly elevated ranking within the hierarchy of the modeling profession.

To most, Rick is well known for glorifying, celebrating or possibly even deifying the male physique as well as shooting many advertising campaigns for select international brands. What most don’t realize is that Rick is rather politically outspoken and yes he actually does shoot women as well; his no Johnny one note. What is so intriguing about his work is that he can equally infuse an eroticism or sexual tension in his male and female imagery. For those who wish to take it a step further one might even say that there is some fetishistic quality to the finished product and by that I mean a sort of hyper glorification or possibly objectification of the subject that stands before him.

In an age when anyone with a camera thinks they are a photographer and anyone who stands in front of camera is a model, there is no question that cream rises to the top and that the genuine article cannot be mistaken for some wannabe.

JEFFREY FELNER: Up until this point, what would you say has been your defining moment and why??
RICK DAY: I would say the defining moment for me was a combination of 3 things working in an unwitting parallel. I began shooting for Genre magazine on a regular basis in 2008. I was shooting each issue basically from to cover. The editor, Neal Boulton, pretty much gave me free reign to shoot whatever editorial and cover
I was interested in exploring. This really gave me and my team a lot of space for creativity. I had also been devoting a lot of my time shooting my first book, “PLAYERS”, which was released in 2009. The was about the time the internet was just beginning to explode with blogs and online tumblr accounts that were
Posting the editorials and the images from the book. It was also the first time i had ever been asked for an interview. And then of course along came Instagram. I would say the perfect project or dream

JF: If you could change anything about how the fashion business/machine is perceived, what would you change and how?
RD: If i could change anything about how the fashion business/machine is perceived and how would i change it…. well that answer would change constantly … lol. At the moment a lot of the fashion photography and models “of the moment” are uninspiring to me. Every year the models seem to get younger and younger… soon the editorials will be shot on the middle school playground. Not something personally i am into. I have always been more interested in a real model… not street castings. Also…social media influencers…. give me a break. I remember when designers and editors along with great photographers were the influencers. But then again that was before big corporations decided to buy up and license the design houses which then limited stylists creativity by demanding that the clothing could not be mixed with other designers…etc. etc. etc. Anytime you mix money with creativity…. the money slowly chokes out all creativity

JF: If you could invite any 5 people to dinner who would they be and why?
RD: I wouldn’t need 5 people…. just a 4 Jesus, Satan, Donald Trump and a Lie Detector with a top notch operator. I think you understand the conversation. Really no need for food ... Just food for thought.

JF: You are both provocateur and story teller; which aspect of your career do you most think defines you as an artist and why?

RD: My early life and my upbringing in the ass backward southern state of South Carolina… certainly gave me a ton of fodder for storytelling. And i do have a lot very entertaining stories to tell…. but i would say that being a provocateur defines me more as an artist. I have always been fascinated with lighting and making light tell the story.

LOOK FOR THE NEWEST BOOK EXPECTED TO ARRIVE LATE 2017… CASTINGS: VOLUME 1….  But in the meantime you can see more of his work here, www.rickdaynyc.com, or on Instagram

Posted by FASHION BY THE RULES at 6:41 AM No comments: