meet Lutz Huelle ..a designer for the 21st century


Anyone who “follows” my fashion reviews realizes that I’m pretty much a classicist in many ways or others might say old fashioned and stuck in my ways. The most important thing to know is that I do look at almost every designer that I can whether my cup of tea or not.
I have been watching Lutz for quite some time and I can honestly say that at the start I wasn’t quite sure what to say or what to think of it and then it happened a couple of seasons ago and I was struck with a collection that I saw as beautiful and a departure from what he had been doing and yet it was an evolution as well.
To compound my epiphany, Lutz was suddenly named to be the creative director at Delpozo which is a pet  brand for me as I don’t view it with the same eyes as I would … let’s  say  Dior, who has become a favored whipping post for me. So with  great anticipation, I waited to see what Lutz was going to bring to the table at his  new  position  and he confirmed to me that I was quite correct in constantly watching  what  he was doing in his own  collections.
With all that in mind, I was not only  thrilled that he consented to do this interview but also found out that he is endearing in many ways and most importantly he is a man of grace and polish. So this interview became a labor  of love for me and I hope that EVERYONE will take notice of a genuinely innovative designer who designs … he is not a trendoid , not a media  hungry whore but a designer of clothes that appeal to what might be best referred to as a cult  following. I am now proudly a member of that cult.

Jeffrey Felner: Let’s talk about your career path... What was your path to your present situation?
Lutz Huelle: I studied Fashion at St Martins in London, and then went on to work at Martin Margiela in Paris. After 3 years I left without any clear idea about what I was going to do. I went back to St Martins to teach for a while, took on a freelance job in Italy, and then decided to just do a collection on my own and see what would happen. I financed the first Collection with the money I was earning in Italy, and we organized a show in Paris... The reactions were really positive- we sold to about 15 great stores, so I then took the collection in a suitcase around Italy, trying to find a producer. All this was Fall/Winter 2000.
We stayed under the radar for quite a while, but acquired a small but extremely loyal base of clients, which enabled us to continue working, even when around 2008 things went a bit haywire...
Then, around 2012 we suddenly had a breakthrough. I’d always been working with the idea of elevating aspects of streetwear into High Fashion or Luxury- the sense that people would want to wear clothes that corresponded to their way of life today, and this suddenly became the new norm, which in turn made people react to my work in new and unexpected ways.
I’d always felt that a lot of what we were seeing on catwalks did not correspond to how people were dressing, at least not the people around me, and I had always wanted to dress people in everyday situations instead of solely on a catwalk.


JF: Can you tell us about what you expect to do with Delpozo as well with your own collection? Do you have a plan or mindset for both or either?
LH: I think one of the reasons why the people at Delpozo contacted me was that they saw similarities between my work and what their future plans for Delpozo. They have an incredible image that is more anchored in couture than pret-a-porter, which is great for occasion dressing and red carpet but not so much for real life or the needs of women today.
My idea is to design Delpozo for today’s needs without sacrificing the beauty and sense of occasion. Real Clothes, imbued with the magic of Delpozo ... that’s the plan!
For my own collection there really has never been a plan- it’s just a continuous flow where one collection follows the other. I rarely start at zero when working on a new collection, I just look at the things that I like most or that have worked well and see how they could evolve or continue.
In general I can see myself going towards something less and less inspired by streetwear- it’s already been like this for a few seasons, and the idea of a certain kind of ‘ladylike’ dressing seems kind of inspiring to me... for the first time ever to be honest. We’ll see  :-)


JF: If you could invite any 5 people to dinner, who would they be and why?
LH: The whole cast of Pedro Almodovar’s ‘High Heels’ including Miguel Bose in drag! I’m a huge fan of Almodovar and love all of his movies, but have a soft spot for both High Heels and Law of Desire. I loved the latest one too!


JF: Can you sort of give us a brief idea of how you go about designing a collection … is it fabric first or sketch first or inspiration first? Or does it change each season?
LH: It really depends, it could be any ... what I do always is look at the preceding collection and see what I still like and what I feel is still interesting. Sometimes an idea has come really late and has not been properly developed, or something hasn’t worked the way I thought it would, and it’d nice to be able to go back and do things maybe better or differently.
Also something maybe wasn’t right in the fabric so was cancelled ... it’s really an ongoing flow of work. I also carry a book with me where I note anything that comes into my mind, so at the start of each new season I will go through this and see what feels right for the next season.
JF: Do you have any style/fashion icons or mentors that would you would consider to be inspirational and why have you chosen them?
The first big inspiration was Comme des Garçons … it was such a shock seeing these garments for the first time! Not only because they were extreme in their technicality and finishing, but also because they were for a woman that I felt had not existed in fashion before. It also upended any notions of what fashion and femininity could be... suddenly it seemed that anything was possible.
Then of course Martin Margiela, who I felt a huge affinity with because he seemed to dress women I knew and understood, not only a dream but also a sense of reality, extreme and completely easy at the same time.
Balenciaga for the dream and perfection! Saint Laurent for the Smoking...and Katharine Hamnett for her World Peace Now T-shirt... actually there are so many!
Posted by FASHION BY THE RULES at 6:24 AM 1 comment:

As Vogue points out “Gaultier occupies a rare spot in the couture landscape: he’s the only famous French couturier of his generation still rocking out at his own house. And he is obviously still having a blast.”


His Fashion Freak Show is so popular it is heading to London this season. What is so imperative to keep in mind is that these clothes come from the same mind and hand that designed them decades ago. These are not reimaginings or extrapolations at the hands of others who take the mantle of a designer brand. All of these clothes are pure JPG.


Moncler should hide their head in shame when they see what the “enfant terrible” of fashion has cooked up in “his kitchen.” Though no longer an “enfant” JPG is a designer who possesses the skillset and vision to be more soigné than Ralph Rucci and more outrageous than Viktor & Rolf. He is a man of many talents with the ability to translate his fantasies into reality. This has absolutely nothing to do with wearability or salability, this is about fashion in its purest and most creative sense as it is direct to client!


Love it all… no ... respect him  with all of my being for staying the course and showing the fashion world that he can do just about anything he wants to do. The real challenge as a viewer is to be able to strip away the spectacle and gimmickry and see some incredibly beautiful truly haute couture clothes aimed at a very select few. The die hards will find what they love and I’d be willing to bet there will be new clients knocking at the door chez Gaultier very soon.

Posted by FASHION BY THE RULES at 8:16 AM No comments:


Yes, it is a tour de force of: color, extremes, fantasy, volume, spectacle, exaggerations, proportions, the prowess of their ateliers mostly and a huge amount of shapeless printed dresses.

“What if Cecil Beaton’s famous photograph of Charles James dresses could be with black women?”  Pierpaolo Piccioli’ …. Well … DUH like black women in big dresses!


I can’t decide If the influence is Incan or Mogol for the absurd headpieces and then sometimes I think they remind me of African tribal head pieces. What I can decide and see are a ton of wedding cake dresses presented for the sake of shock and awe. The supposedly wearable clothes couldn’t possibly be any simpler, less flattering or basic. What really came to mind was Maude aka Bea Arthur, Mrs. Roper of Three’s Company fame  and Lovey Howell of Gilligan’s Island fame, so what I’m saying here is this was hardly a  tour de  force of clothes… it was all about everything BUT the clothes.

“The only way to make couture alive today is to embrace different women’s identities and cultures” and don’t you forget it .. apparently PP is tuned into a planet far far away

Prints, gimmicks, sight gags and everything from ruffs to yarn wigs and on top of everything else, 99% of the clothes  made the models look thick other than one  Grace Jones inspired hooded column and one hot pink sequined cowl number. Poor Lauren Hutton (in a drawstring waist dress…. Really?) looked like a smiling house frau in a before image for Weight Watchers.

So I guess no one looks at the clothes just the kaleidoscopic effect and trickery of colors and patterns all at once all parading in front you in dizzying flights of fancy!

Posted by FASHION BY THE RULES at 7:24 AM No comments:

Who - What _ Why Haute Couture

I'm far too busy shaking my head at this one so write your own... the images speak for themselves ..... click on the images to enlarge if you dare 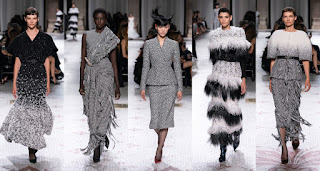 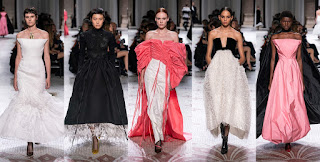 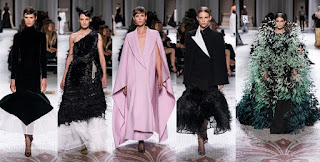 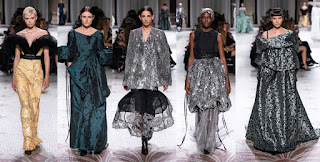 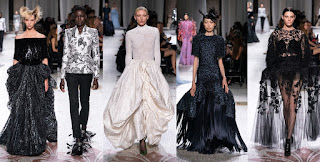 Posted by FASHION BY THE RULES at 11:17 AM No comments: