from maximalist to minimalist!
If you really want to see what the 21st century iteration of what Jil Sander SHOULD look like ... stop right here.
Quite simply, this is breathtaking in its simplicity.
Clothes designed in their purest form
No bells, no whistles, no shock no awe …. Clothes pared down to exquisite clarity
In a season where the clown like collections of Gucci and Loewe are praised this is a collection worthy of notice and praise for it is the antithesis of that detritus that attracts the media elite because of what they can spend on ad pages!

Bravo Haider!
Posted by FASHION BY THE RULES at 9:25 AM No comments:

I don’t see myself as a fashion intellect nor do I pretend to like what I don’t understand but in the case of Lutz kept looking and I kept finding my way to understand what he does and see the consistency and DNA of his brand.
Lutz has evolved since I first began paying attention and each season he has progressively moved forward. I knew that his appointment at Delpozo would invade his creative process and so I paid even more attention to each presentation.
Now it is clearer to me that Lutz is a designer who has massaged his brand’s DNA and at lack of a better phrase… grown up. By that I mean to say it’s no longer about denim jackets and olive nylon flight jackets, this is now a collection that speaks to the roots of Lutz Huelle just in a more refined and matured way than when he started. The fuchsia, the sparkle, the more fastidious tailoring have now come to the front. His dresses remain easy to wear and have a sort of trendoid feeling without being freakish. There was special attention paid to shoulders and sleeves in this collection which I see as a sort of experimentation for the future.
His use of color has opened a new aspect for his work as has his variety of fabrications and most certainly in the way he has reinterpreted himself. There was a stellar raincoat, a perfect white shirt dress, his signature denims and constructions but now mixed with other fabrications and colors, the shapes are less seemingly complicated and the mood has decidedly shifted away from being so overtly trendy to a more subtle presentation of his design ideology.
In other words he didn’t throw away his original clients, he shifted then to see Lutz in a new light and it’s a most flattering one. While so many of his colleagues have opted to shock and awe, Lutz just smoothed out the edges and brought us fashion as seen through his eyes.
Kudos! Yes! Now I am a Lutz man!
Posted by FASHION BY THE RULES at 8:41 AM No comments:

In an ocean of schlock, shock and awe there floats Andrew Gn who presented a meticulously rendered collection of exquisite quality for women of discerning taste who have no desire to look like circus freaks or badly wrapped gift boxes.
No, I don’t not think this is everyone’s cup of tea nor can I ever be a fan of that horrific length that makes women look like they are standing in a hole but there are clothes here which are just plain and simply beautifully executed.


Mind boggling embroideries, a color palette to delight the eyes and everything from day dresses to suits to cocktail dresses to coats to gowns... imagine that!... an honest to goodness collection in Paris no less.


I can’t say I was personally attracted to the prints but I’m sure there are some who will find them quite appealing. He makes a grand use of pleating in rather basic and wearable shapes but that is his M.O. for his dresses... albeit a few looked a tad little matronly. 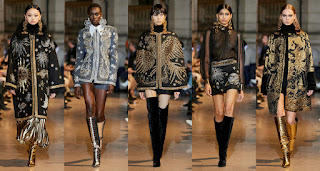 Show me 10 collections that can sit beside this one instead of the lauded and applauded that will never see a human body in them other than on a runway.
Posted by FASHION BY THE RULES at 2:44 PM No comments: