Logo mania… the capricious cacophonous cavalcade of ugly rags and I dare say one of the ugliest and unsightly collections to come along this side of the millennium... Apparently there is no designer that Michele finds out of bounds when it comes to knocking off as this season he managed to even knock off Mikli eyewear … astounding.

Prints and glitz are supposed to deflect from the actual ugliness and clumsiness of this parade ... it is rather Trumpian in ways that distract you with the unappealing, eye popping and hideous clothes that look as if he and minions reached into some grab bag of scraps and piled them on to become Resort 2018 … it defies imagination, let alone offends and assaults the eye, with the absence of any taste ….


These are get ups/costumes ….delivered straight off the clown caravan to where he decides to stage his seasonal attention grabbing extravaganzas. This excuse for a designer seems to believe this is fashion and worse yet is that he has beaten this horse too many times and now he is beating it post mortem.  BTW... Rollerina did the look  first and best!

Go ahead … laud him … applaud him…. because I’d rather die in rags than be caught dead in crap like this. As for the men’s ... or whatever gender that was supposed to appeal to ... have at it … fashion victims of the world unite!
Posted by FASHION BY THE RULES at 7:03 AM No comments:


Fashion, at this point in time, is surely not a smooth path to choose for a career but the savvy designer knows that they must have a “hook” or in other words something that sets them apart from what’s already out there. With the internet as well as brick and mortar still very much in play, competing for sales and attention has increased exponentially just as it has for models and photographers.  Fashion in general has become this sort of free for all for those who believe they bring something to the table.


Then there is Nathan Ayon who has it figured out in a way that is unique to him and his brand. He has most definitely used the visual component of fashion to his advantage but his extra added coupling is SEX and BESPOKE! Some would think it’s an unlikely combination but the visuals substantiate the points and the logic. Case in point is the ubiquitous bomber jacket that pervades the menswear arena at every price but alas most of them are interchangeable or knock offs of one another except for price points. What attracted me to this young man’s work is his take on said jacket. I generally spurn the style because of its “generality” and ubiquity but Nathan found a way to do it with his imprimatur that is exquisitely fashionable and unique in every way. Even the simplest tank top takes on new meaning when rendered in luxe panné velvet or even a gym short translated in the most sensuous of charmeuse… they suddenly become the sexiest pieces of one’s wardrobe; then imagine your bespoke swimwear!!


Jeffrey Felner: Can you give us a brief synopsis of your professional life up to this point?


Nathan Ayon: Well, my first ambition in life was to be a ballet dancer and it was this passion that drove me to take my training at a professional level. I left Yakima Washington and trained in Seattle, Austin, and Houston as a teenager. I danced professionally for a bit, and also did a lot of performance art. After moving to New York City, I attended beauty school and graduated with a license in cosmetology and began working towards a career as a hair stylist which is a craft that I love with all of my heart. However … I always had a passion for clothes. It wasn’t until I was living in New York that I really began to become somewhat obsessed with fashion. I started designing custom pieces for high end clients that I knew both through hair, and my circles of ballet and opera enthusiasts. I decided to launch my own business in 2016 and focused on custom clothing. I’ve had three shows since then which took place in both in New York City and Fire Island Pines.

JF: Do you have any style icons or mentors who influence your body of work and

JF: If you could invite any 5 people to dinner who would they be and why?


NA: Let’s see. ANY 5 people…  Anne Frank, Marilyn Monroe, Oscar Wilde, Andy Warhol, and Stevie Nicks. The world was changing so much around them, and they all found a way to make a difference and be remembered. I think that’s romantic.

JF:  If you could select any collaboration, whether person or brand, who or what would it be and why?


NA: Iris Apfel, although she’s already taken by Macy’s; I really respect her approach to style and usage of colors. She understands authentic craftsmanship, and the mixing of “highs” and “lows” to make an outfit truly fun and individual.

JF: What is that little voice in your head that inspires and what is that voice telling you?


NA: The voice is my head can be annoying at times … sometimes I hit a creative roadblock and cannot figure out how to move forward. In those cases I like to visit places that inspire me.  Fire Island Pines has been a huge inspiration for my clothing. The one important thing that the voice in my head tells me is to portray my life and experiences through my work. I want my clients to feel unique and represented by the clothing I design for them while also presenting a part of me within each piece. Also, that phrase “Be the change you want to see in the world.”
Posted by FASHION BY THE RULES at 6:49 AM No comments:


Let’s start out on a few positive notes ... nothing really to do with the clothes actually … it was colorful! And the models didn’t look like they were the walking dead…


Now, let’s get down to business…… HIP HOP!!! Really???  C’mon … as if this hasn’t been beaten to death now for ages. Tracksuits… it’s Valentino Guccified! or even worse Kanye'd. How sad. Fur flip flops??


Any hope of recapturing the roots, taste level and allure of the heritage brand is long gone along anything that might be confused with chic or urbane. Yes, you can be sure that the clothes are wildly expensive and very well made but alas who cares?


As if this wasn’t all bad enough did I not detect some takes on deconstruction ala Margiela?  Did I not detect some gowns and dresses that looked like some very old Louis Féraud? Then of course there were the signature monastic looks and a few very over the top over simplified black gowns toward the end. The winner was a hot pink velvet sliver of a gown mixed in.


I can say there were some of the most unattractive clothes I have seen in a while... many of them being lace confections and I believe one of them to be lace, charmeuse and mink all rolled into some kind of demented cheerleader costume in emerald green … then there was a whiff of Frida Kahlo in there but god only knows why.


What else is there to say other than why on earth would anyone design or opt to knock off or rift on  what has been done over and over again? The horse died of a brutal beating a long time ago!

Posted by FASHION BY THE RULES at 6:39 AM No comments:


When doing these interviews, sometimes they come about after a very first meeting and such is the case here with Jonathan Cannaux. Selecting a subject is a roll of the dice as you just never know whether or not that person will react and respond in an engaging way. Jonathan is one of those surprises that upon meeting, I was amazed to see that the photographic images don’t begin to capture the real person who was sitting beside me. He speaks with great candor and is self-effacing in the most charming of ways.

That said, and by no means is this negative, Jonathan is warm, almost boyish with incredible eyes and well ... the French accent doesn’t hurt at all. What the camera captures is the professional in him, he plays to the camera and camera captures the model/actor in him ….  He is captivatingly handsome with the requisite flawless body, million dollar smile and the perfect subject of any photograph without being just another face in the crowd.

As if that isn’t enough, you will read that he is a man of determination and great charisma with a great sense of reality. He is genuine, intelligent, endearing and well ... it all just adds to his allure plus the fact that quite simply said ... the camera loves him. It is my privilege and honor to introduce you to him and to offer you the chance to meet a credit to his craft as well as someone I can now call my friend. 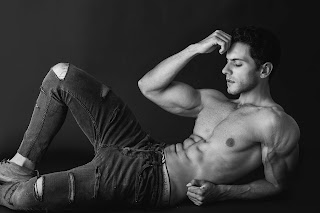 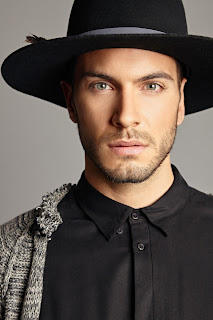 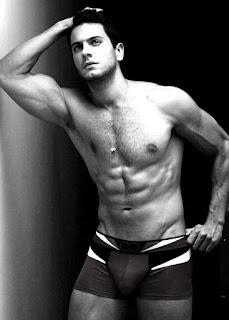 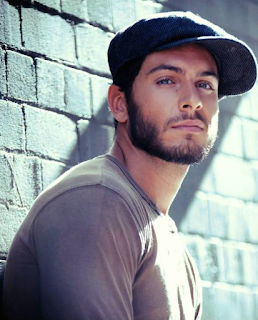 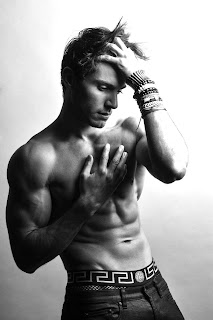 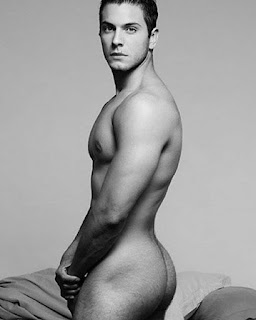 Posted by FASHION BY THE RULES at 4:41 AM No comments: