And yet again I must thank the internet gods for the ability to seek and find individuals such as Ben Fronckowiak. I don’t circulate within the worlds of art or modelling on any sort of consistent basis but I do watch out for those who create beauty in some way shape or form … possibly via multiple conveyances of self-expression, including their own innate beauty.
Enter Ben Fronckowiak who juggles his painting, his modeling and his burgeoning film career all at the same time. Once again, the internet has allowed me to find people who know people who know me, one of which is quoted within this interview. The world has gotten much smaller but my network of creatives has grown exponentially and I want to make others aware of these creatives who might not yet be marquee names but who are well on their way.

As you will read, Ben is fluent in the telling of his story and as I came to find to find out, he is somewhat of a prodigy being accepted to UCLA film school at age 19 from which he graduated cum laude. It is always of great interest to me to “hear” from these people, in their own words, how their lives have evolved; some on a singular path and some on multiple paths. Ben is of the latter variety;  his art is arresting and reminds me and I’m sure many others of street/ graffiti art but to me his work  also prompted a correlation to a sort of 21st century Rouault and Bosch. His modeling career is one that might be more challenging as these days, men and women who are considered to be “conventionally beautiful or handsome” are passed over since the current trend is for barely pubescent and less than attractive millennials; the fashion world is in flux.  As for film, I cannot assess that since I have little to no experience in that field, other than by schooling.  but what gives me great confidence in a man like this is that he possesses persistence and passion for what he does and that is what artists of all kinds must own.

So now you get to hear from my latest triple threat of talent ….. Ben Fronckowiak,  in his own words.

Jeffrey Felner: Can you tell us a little bit of how you arrived at this moment in your life story?


Ben Fronckowiak: I’ve arrived here through a lot of hard work and serendipity—I’m definitely happy to be where I am … getting recognition for what I am passionate about, but there is still a lot more work that I have to do. I graduated from UCLA Film School and that was my immersion and introduction into the world of visual arts. While there, I filmed a documentary backstage in a transsexual venue. Hearing their stories had a strong influence on my art which continues to my paintings to this day. Traveling has also played a large part at this moment in my life. I’ve lived and worked in Miami, Los Angeles, and New York while modeling, and painting. With social media, I’ve been able to share


My work in ways that would never have been possible before … combining painting, filming and modeling. I can paint a painting, take a photo with it, and film the process to create something that I think is unique. I’ve arrived here by putting myself out there and taking hold of every opportunity that comes my way—even painting murals in the street.


“Ben employs a passion for color and combinations in a way that evokes at once both tension and intrigue and  brings excitement and energy to any environment”   Michael Dawkins Interior designer, Jewelry designer and client of the artist


JF: since you juggle multiple professions/ talents, can you tell us who your mentors or icons that have influenced you in each or just one of your endeavors and why?

BF: Film directors are huge influences for me, especially the ones who started as painters. My goal is to direct films. I’m particularly influenced by David Lynch, Tim Burton, and Guillermo Del Toro because they can take their characters and give them life not only on canvas, but in the moving image. 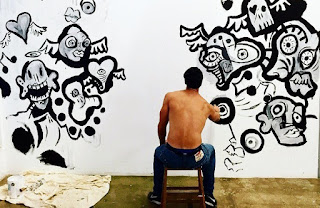 JF: If you could invite any 5 people to dinner who would they be and why?


I’d invite them because they are major influences for me. Picasso as he’s completely mastered his craft of painting, Almodovar because I think he’s a genius director, Kahlo as she too creates work that is raw and vulnerable, Einstein as I’d like to hear him talk about theories of the universe, and Mandella because he’s been through so much hardship to be where he is today. 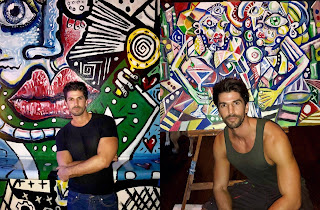 JF: If you could choose any project or collaboration what or who would it be with and why?


BF: I would like to pair up with another director and create a film with my characters—i.e. a Guillermo Del Toro inspired film with my art. This and pairing up with a major fashion label to have my designs appear on clothing … Louis Vuitton, Gucci (these are big dreams). 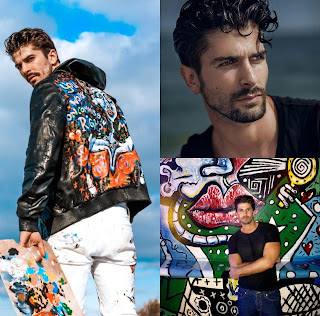 JF: Since all of your talents seem to focus on the visual, can you speak to the changing “eye” of the beholders or even your own mindset when it comes to what you are looking to achieve?


BF: I’m always looking to achieve something which has been extracted from my life experiences. When I first started painting, themes were based heavily on relationships and trying to understand them … the mysteries of attraction and love. Right now, I’m sponsored by a resort in Pennsylvania to create new work while being their resident artist. My work is more influenced by life and death, and struggles to understand our position in this world … how fragile our minds can be and how malleable we are. I’m always listening to what is happening in my life, what it’s trying to tell me, and then aim to convey that through my work. 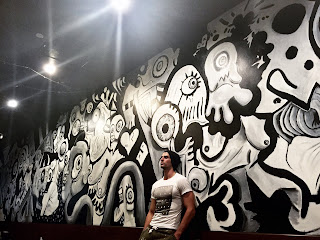 
www.instagram.com/benfgraphic
Posted by FASHION BY THE RULES at 12:22 PM