I cannot tell a lie... I am jealous and envious of Kent Neffendorf in the same way I was jealous of George Stravinos and Leland Neff and any artist capable of capturing the photorealism of the  human body with no camera in sight! Being an Art History and design major in college I was required to take studio classes and I humbly admit that I really sucked at drawing and painting. I had a bit more talent in drawing but nowhere near the prowess of the names mentioned. Kent's art is one of the reasons that attracted me to his work for he is a master of the genre who just so happens to celebrate the male form and cope with the duplicitous standards when it comes to posting his work. 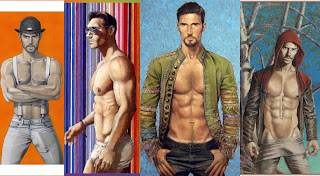 What astounds me is that if the body is drawn or painted there’s no complaint no matter how realistic and yet a photograph is positively out of the question unless it conceals certain   body parts... i.e., the female nipple and of course the male member; both grounds for violation. All that aside and not to be taken lightly, those standards have afforded many artists an audience that would otherwise be impossible to garner while others are deprived of it.

BUT!!!! This is about Kent Neffendorf, the artist, his modus operandi, his past, his present and his future and the fact that I am just gobsmacked by the likenesses he achieves and after reading his interview, his open and honest path to his present situation and for that I salute him and respect his and his work even more so...

Enough of my whining let’s get to the point which is .... Meet Kent Neffendorf in his own words....

Jeffrey Felner: Can you give us some background as to how you landed at your present occupation as artist? 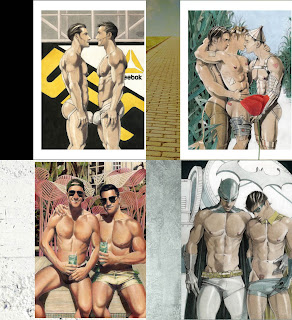 Now I paint more for myself and prefer to create the guys in my head. I call him a Kentman and there's a basic look to a Kentman. Big nose, big ears, big dick and nipples, full lips and shaggy, spiky or slicked back hair; a “stache”/facial hair is particularly hot. In most cases they are partially clothed because I find the act of undressing or the reveal is an ultimate turn-on. Muscle shirts, towels, underwear, jeans falling down, shirts unbuttoned...all good stuff. What’s interesting to me is how my love of fashion merged into an obsession with men and their sexuality. Clothing is key. A figure in boxers or a t-shirt is infinitely more seductive to me than a nude figure. The adornment of the figure, even a tattoo or glasses, helps complete the “story.” I like the way clothing create the character: cowboy, mechanic, coach, swimmer, cop. Kentmen. 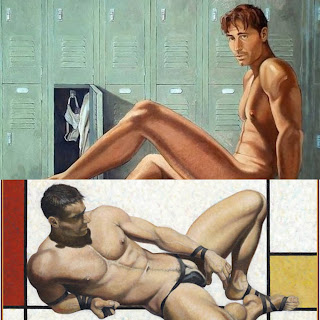 JF: Who would you say is your target audience? Do you have specific criteria when it comes to selecting and deciding on your subjects why?

KN: My target audience has pretty much always been gay men. I started out painting celebrity and fashion portraits as a teenager but my art evolved into male-centric, some might say fetishistic, as focus veered to sexuality. This phase began by drawing the men of my fantasies, men on the street, Tom Jones. I was particularly drawn to visible penis lines (VPL). Public exhibition be it intentional or not would alter photos in all sorts of media and they were all fair game to be sexed up. Consequently, the bulge has been a lifetime affair for me.

When people look at my work, I hope they feel the electricity of being a man and the celebration of the male form. 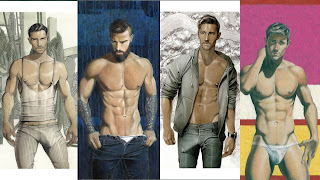 JF: Do or did you have any style mentors or those who you admire for their work and why?

KN: I have immense respect for so many artists. Sir Lawrence Alma-Tadema, Robert Bechtle, Bouguereau, John McGinnis, Maxfield Parrish, Bernie Fuchs, Jean-Leon Gerome and Ingres are all fantastic masters of their craft. I always feel uplifted and invigorated when I see any of their works.  I also love the pinup paintings of Vargas and Olivia and Hajime Sorayama. Role models for sure. Each in their own way create(d) stylized sexual icons of beauty. They are known for their women though, and my intent has always been to turn the focus on the male figure. I like a painting that tells a story and there’s an artist named DJ Hall who I became of aware of years ago back when I was in Manhattan. She was featured in Los Angeles magazine and for decades and has created an aspirational lifestyle: beach, resort, poolside.

JF:If you could invite any 5 people to dinner, who would they be and why?   KN:Dina Merrill, Al Parker, Larry McMurtry, Jane Fonda and Robert Altman ...Dina Merrill because she was so gorgeous and elegant. I loved her face and used her as inspiration in many of my fashion illustrations. Al Parker because he was the ultimate sex object to me. He had a great look and I was obsessed over him for many years. Larry McMurty because as a Texas boy myself his books resonated. I knew those people he wrote about and some of his novels have influenced my work to this day. Jane Fonda because she’s JANE FONDA. She has inspired me from her film work to her social causes and workouts and has always been so eloquent throughout her many incarnations. I love her passion and heart and her desire to put herself out there into the world to try and make it better. Additionally Klute is one of my very favorite films. Speaking of films my favorite director would have to be at the party, Robert Altman as he’s the best director, a master of authenticity who would work with the actors to help them tell their truths about the characters they portrayed. A masterpiece of his technique is the film Nashville.

JF: Do you think that social media has diluted skilled and professional artists as well as the occupations of being a model or photographer and why??

KN:Social media has been wonderful to me as an artist. Instagram and Twitter in particular have provided platforms for a vast number of people to see my work and I do enjoy the process of creating posts. I feel social media provides a wider audience than ever possible before. It creates a global community.

I am offering signed giclee prints for the first time of some of my artwork.

Posted by FASHION BY THE RULES at 7:53 AM