When I first saw the collection there was something that bothered me other than all the drama of the past week. I felt a somewhat uncomfortable feeling about this collection which may or may not have been influenced by the most current events. With a little research I was able to figure out that the runway itself was different as the surface of the actual runway was flat and dark as opposed to r 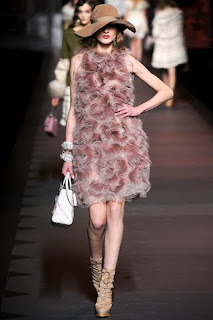 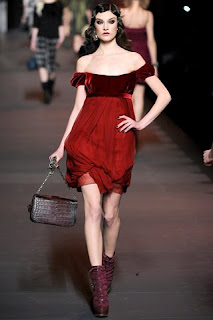 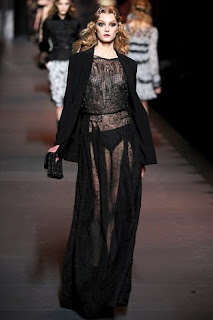 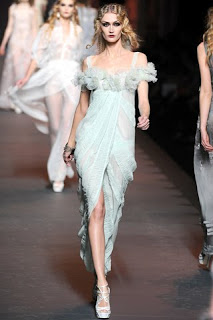 eflective and glossy which cast a certain pall over the collection. Maybe it was like looking in a mirror and seeing no reflection.
Yes there were all the Galliano touches of pirate attire, knickers, skyscraper stilettos and boots, the filmy dresses amongst all the other unwritten language that the designer had created for the famed house. Galliano created a vocabulary which had no dialects…there was only one and that was Dior by Galliano. As sad as I may be about this whole affair, I found the collection to be a halfhearted attempt at another season of more clothes and more forced drama. Yes, the makeup was toned down yet that didn’t jive with the clothes which were not toned down and yet there seems to be tedium present.
In essence, Mr. Galliano is a master story teller and a master of the spectacle and he achieved it at least 4 times a year for the last 15 years at Dior. For whatever the reason and whatever the circumstances of the not so distant past, I do know that he will be missed as showman and designer and can’t help but have a feeling that there was some sort of divine plan, bigger picture involved which caused this enormous upheaval for an individual, a brand and an entire industry .
Posted by FASHION BY THE RULES at 12:26 PM