Let it be said I   don’t deal well with change but Virginie might have presented her best collection to date with her Chanel métiers d'art show for pre-fall. No, it does not smart of the glories of Karl but it is a polished and pared down modern take on the brand without focusing solely on the famous cardigan jacket. 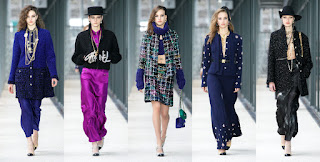 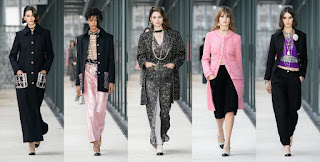 There are jackets galore, some close to the body, some short, some cabans and even some ankle length all in a variety of rigidly to soft tailoring. There were moments of Karl/Ines   flashbacks and yet there were also pieces that spoke to a more contemporary Chanel rather than what we were trained to expect from the master. There was polish there, the shoes, the jewelry, the handbags, the camelia and yes takes on that famous cardigan jacket. 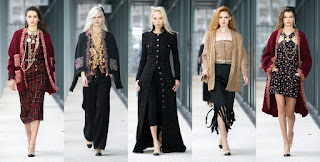 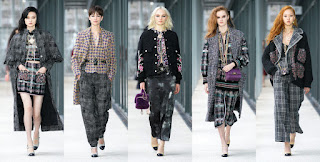 What didn’t work, in my opinion were the bulky knits, the bare midriffs and of course the denims but then again even Karl used denim but I must say that the coats in the short denim sequence looked pretty incredible. The logo pieces were mostly unnecessary as they were too forced and mostly on the thick side, there was one dress toward the end where the logo appeared under layers of tulle which looked modern and young and well thought out. 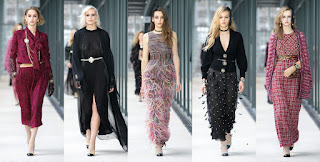 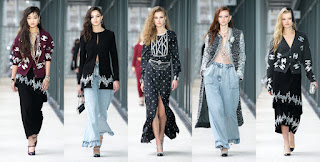 Color palette was refreshing since it veered away from a strictly black and white color theme but of course the most effective were the black and white pieces or combinations thereof save for a few crimson pieces. I’m not big on pegged pants but for some unknown reason it is possible they didn’t disturb me due to the fact that my attention was drawn to everything else in each outfit. 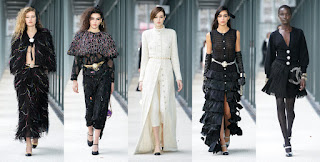 I suggest you see you it in motion and hope that Viard will continue on this path rather than the divergent path she had chosen in her previous unappealing collections.