This is an unexpected and amazing surprise to have Fern Mallis as the subject of one of my Q & A sessions. If you are not aware of whom she is then you are only pretending to be a dyed in the wool “fashionphile.” Ms. Mallis has just had her first book (Fashion Lives) released by Rizzoli within the last 30 days. The book, which is an unadulterated joy to read and selling like crazy, is comprised of a curated selection of sit down interviews conducted by the author. Her interviewees are some of the most notable fashion, in its broadest sense, personalities of our generation.  Think Mellen, Kamali, Jacobs, Oscar, Karan, Ford, Cunningham ... To name a few …These sit downs were conducted as part of a series produced at the 92nd St Y in NYC over the past few years. 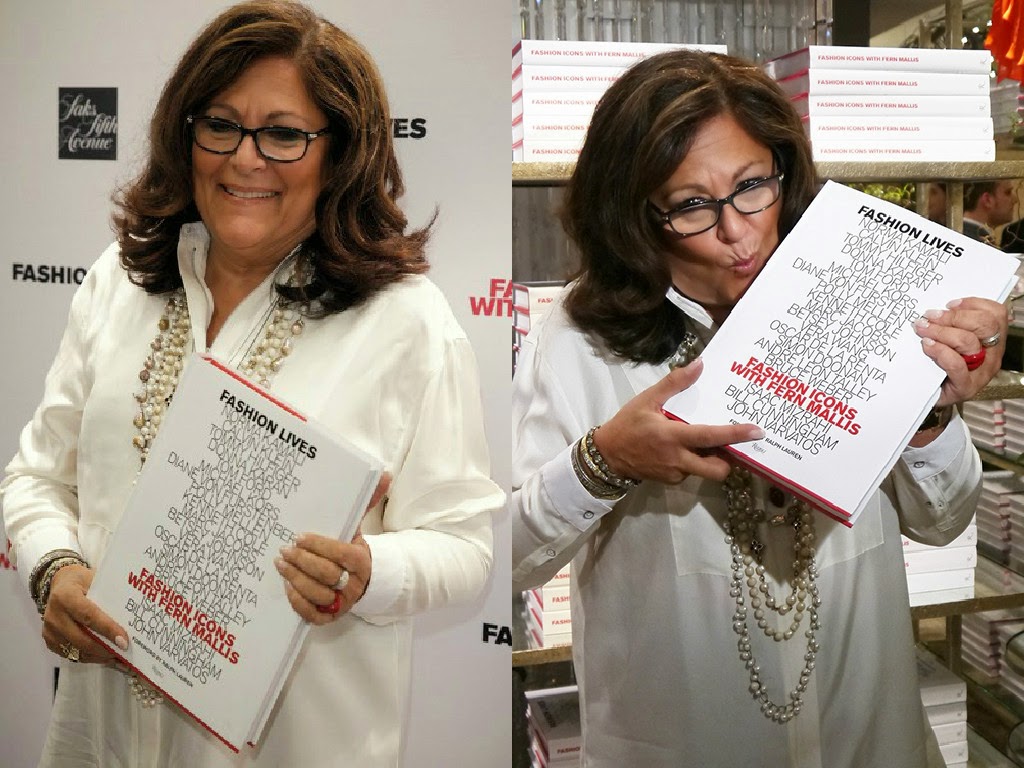 One tidbit about the hugely attended book signing at SFA on April 20th and that is: the book and author were afforded nothing short of megastar treatment when 18 windows were devoted first to the book, then the designers and then of course the raison d’etre for both .. Fern Mallis. It is not exactly a common occurrence to have one of the world’s most celebrated department stores, known for selling CLOTHES to devote its entire Fifth Avenue frontage to a book! 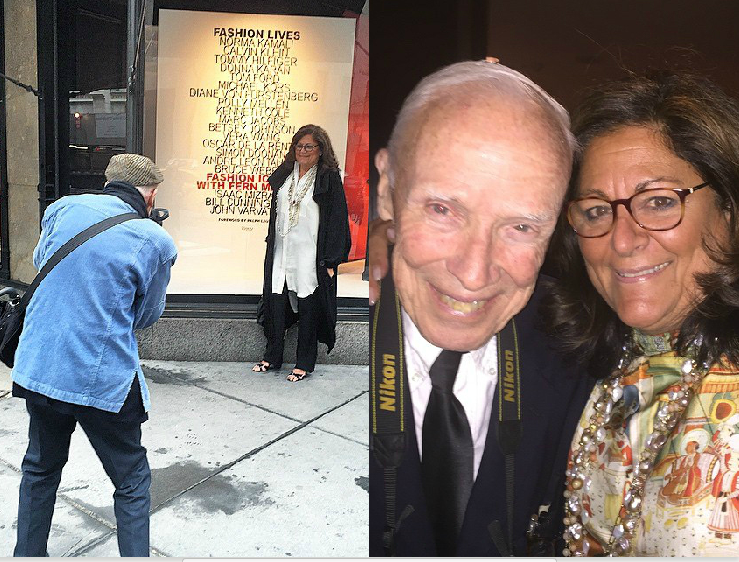 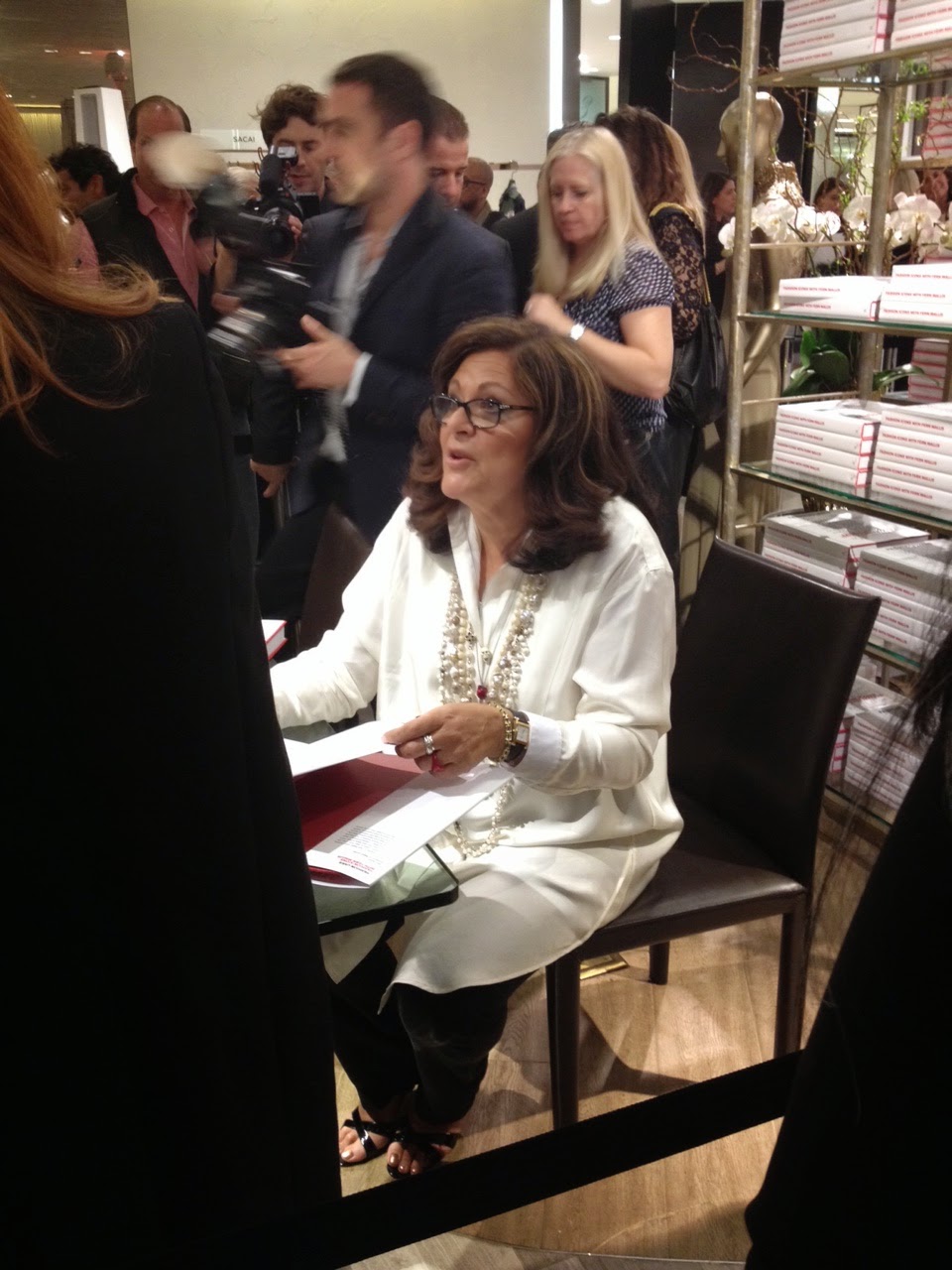 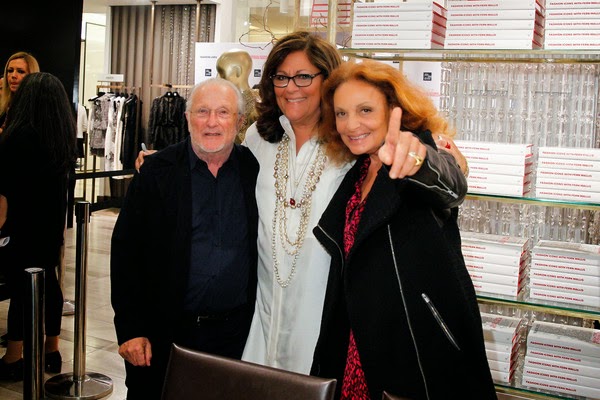 I am humbled and gratified that Ms. Mallis made the effort to do this “interview” during this extraordinarily busy time given her promotion schedule for the book. It just really shows me that there are people who still retain their grace and integrity even after being in this business for so long which is not always easy. This little interlude between us also should demonstrate to all that Fern Mallis gives as good as she gets. Her replies are written with great candor backed up with extensive knowledge and experience. If you need to google her, then just check out Wikipedia... that says it all! 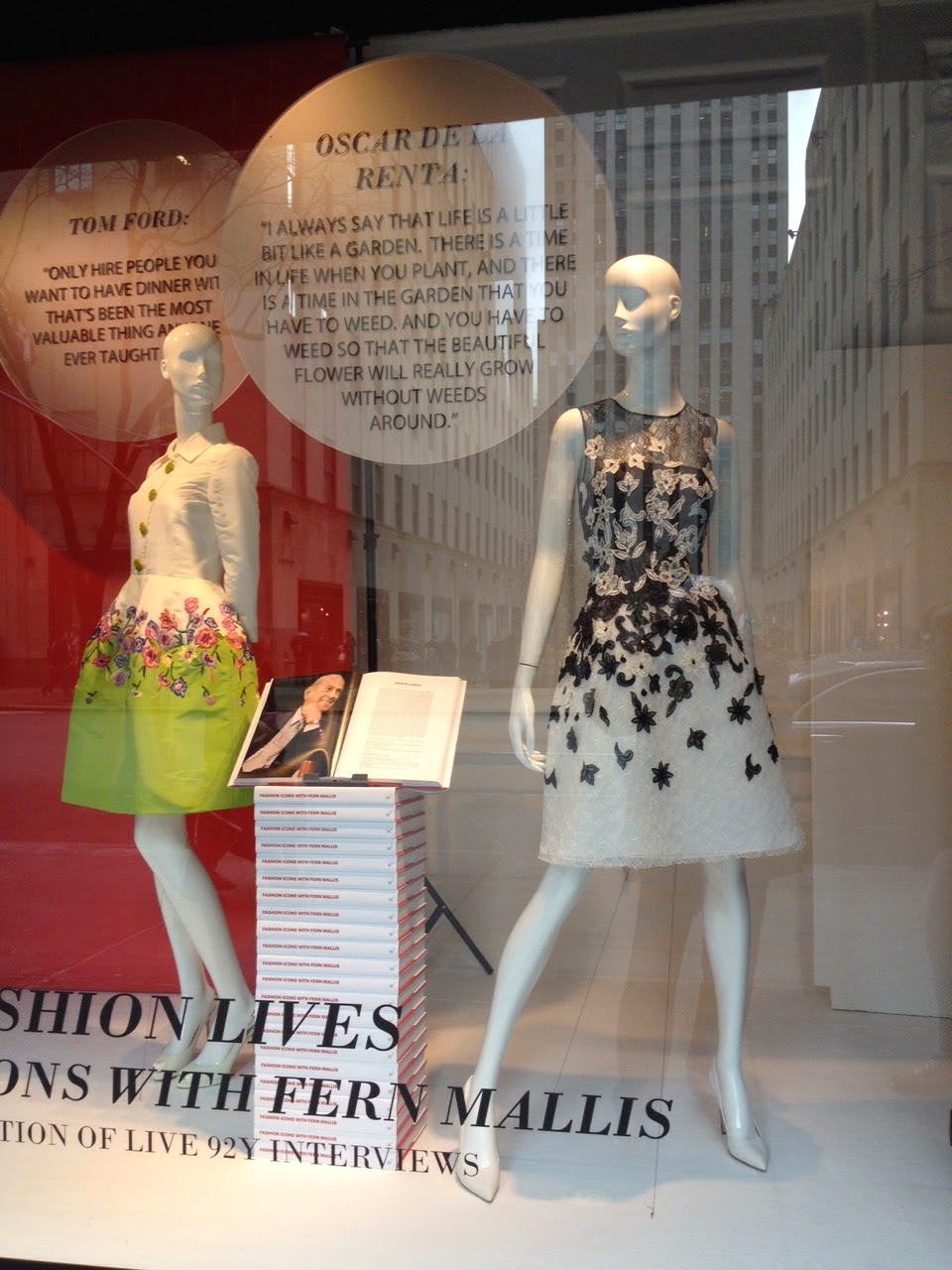 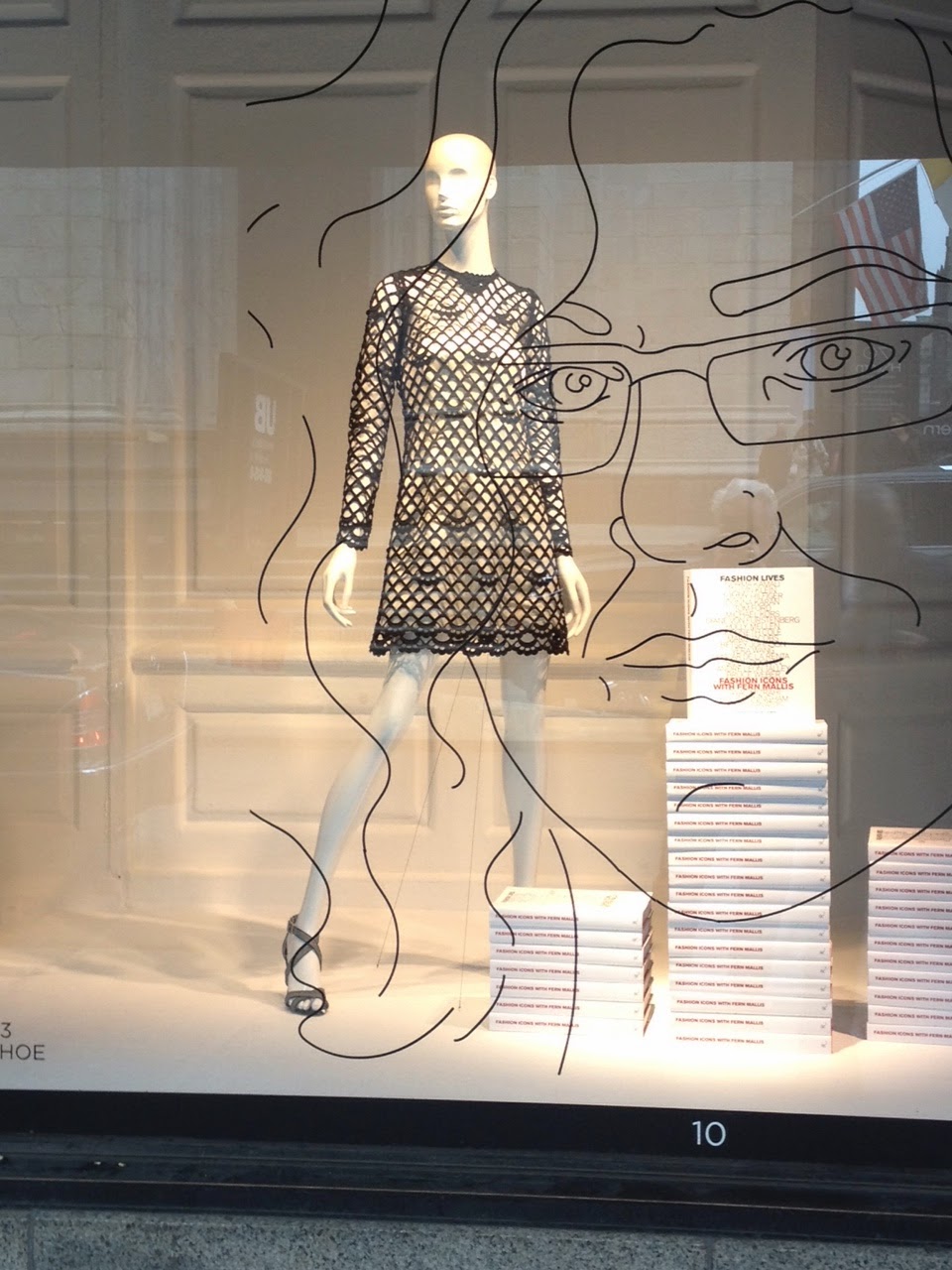 So it is my pleasure to so offer a chat with the author of the moment! Fern Mallis….

1-After the runaway success of your first book, Fashion Lives, what’s on your agenda for a follow up? ideas??
It’s a little too early to be planning more books, but I do have some in mind, including a Volume II of Fashion Lives, since there are already  4 interviews-5 interviews that didn’t get into this book.  My next interview at 92Y is on June 3rd with Victoria Beckham,

2-While we are on the subject, I’m going to steal one of the questions you asked Bill Cunningham and that was “what was the best show you ever attended and why?”
There have been several very memorable ones; I loved the final show Bill Blass did when he announced his retirement.  It was in the morning during Hurricane Floyd.  The winds and rains were unbelievable, but his “Ladies” kept arriving with umbrellas blowing away, the tents were leaking everywhere….the drops of water dripping in the venue and over the runway were more dramatic with the lights hitting them…and it was a scary day….Bill paced backstage with his cigarette and said to me he was perfectly happy to cancel the show, the clothes had been made, models came, but he was worried about guests being out in this weather.  I said we were not letting him retire without this final show.  It went up late, but the music was all Gershwin, Lerner and Lowe, all very American, with red white and blue lit backdrop…The show was gorgeous and when he came out for his bow at the end- there wasn’t a dry eye in the house during an extended standing ovation.  I’ll never forget it.

3-Being a child of the garment center and having been so immersed in the popularizing of Seventh Avenue and its designers ... what do you think of the evaporation of what was 7th Avenue and why do you think it happened and lastly do you see it becoming extinct?
It had a lot to do with greed, in making the clothes as inexpensive as possible with a large markup….the unions in the garment center made it too expensive to produce in NYC, the real estate folks saw buildings in the district with full floors dedicated to manufacturing and sewing and knew they could get top dollar as office space and showrooms, and they helped push out the workers, and it all started to be made overseas in Asia, India, China, Vietnam etc…    It’s sad to not see it all happening in the district and some of that old-fashioned garment center energy is gone.  It’s not extinct however as there is a renewed commitment to making it in NY again, however it will never be what it once was.

4-Who would you say have been your mentors, idols or influences during your long and varied career within the world of fashion and why?
Stan Herman who was President of CFDA while I was ED, has been a great mentor, the many designers in my book have been my idols and have influenced me—Calvin, Ralph Donna, Michael, Tommy, Betsey

5-Do you believe that runway shows have lost their importance due to over coverage/exposure via the age of the internet or the pandering of  the media due to advertising  budgets and the whims of certain editors rather than real merit? ... Thoughts??
The runway shows have lost a lot of their exclusivity and WOW factor, as people are much more excited about things they can’t get into and see, than they are about something available to everyone.
But with the internet, the iphones, and other handhelds- every image is instantly available and several business have been spawned allowing people to pre-order from the runway before a store even places an order….It’s a new ball game now, and we all have to adjust to the power in the palm of our hands,

6-There are so many new and wildly talented designers who don’t get recognized by the media, the CFDA or the retail establishment. Don’t you think that there should be some way to cost effectively show off all of this “hidden” talent? Any ideas or suggestions?
I do think that in NYC, there are many programs and initiatives that DO identify and help new, up and coming untested talent.  Other int’l cities are trying very hard to copy these programs.  These programs assist in fashion show expenses, cash for their business and provide mentors, and get them in front of the media.

7-Have you ever wished to once again “hear the voices” of fashion critics like Bernadine Morris or Hebe Dorsey; meaning honest to goodness fashion reviews/reportage and not front rows and venue?
Well Hebe Dorsey was before my time, but I do remember the last years of Bernadine Morris.   I miss Amy Spindler’s voice, John Duka’s wit and observance of our industry and its players, and I miss Cathy Horyn’s take no prisoner’s coverage of the collections…

8-If you could invite any 5 people to dinner ... past of present ... who would they be and why?
This is very difficult…there are many people that I’d love to dine with, but this first dinner could maybe be with YSL, Coco Chanel, Elizabeth Taylor, Pres. Obama and Diana Vreeland. I think I could just sit back and listen all night without having to say a word… each of them are opinionated, smart, brilliantly clever and talented…and maybe a sixth- having Julia Childs there cooking the meal…

9-What are your thoughts on vintage apparel as well as all the referencing that has  been going on and the fact that  rarely if ever  credit is given to the originator of the “idea” that has been recycled?
I’m not a “vintage” shopper, however many designers are.  In essence nothing is brand new and not influenced by something that came before, but I’m not surprised by not giving credit to where the inspiration comes from…Frankly it would cause havoc in an industry to keep acknowledging this.  But with that said every so often a designer’s line sheet at show will explain where the ideas came from and if there was a specific look or person that they were influenced by.

10- Given your long history and breadth of knowledge of the fashion business, how do you feel about the heritage brands from our past being reinvented in ways that have no common thread with the original DNA?
We have yet to really see an American heritage brand re-invented successfully in this country.  Halston has tried several times.   Now Chris Benz is trying to do it at Bill Blass and hopefully that will succeed.  The recent appointment of Peter Copping at Oscar de laRenta might be the first time this is working.  He is channeling the spirit of Oscar and not deviating from the look of the house, yet putting his stamp on it.   I think it is imperative that there is some connection with the original design philosophy.
Posted by FASHION BY THE RULES at 7:14 AM