ON BEING A SEPTUAGENARIAN ...plus one

Well, it’s one year later but this year has been like no other that I lived thru... the year that will make history, the year of a world-wide pandemic that has taken its toll on each and every one of us in some way shape or form... consciously or unconsciously. 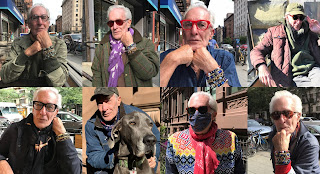 We have lived in isolation and under the most difficult circumstances and experienced moments we thought impossible we’d ever know. There were times we lost hope, we lost loved ones and possibly we even lost the idea that any happiness will ever come our way again.

Personally, my health has diminished but that’s to be expected from a 71-year-old machine that at times might have been overused. I’ve tried to be a cheerleader for my dearest friends, no matter virtual or in real life, as they are what kept me going and I felt that it was my duty as a friend to try to push them into a better frame of mind and hopefully even make them laugh... even at my own expense if necessary. I remain basically a non-complaining oldie since I learned that bitching and moaning to the world won’t make things better. I reminded myself every day that things could always be worse

I experienced a great deal of nostalgia by telling those who once made my heart more than flutter and that I harbored secret crushes on them ...  in some ways it was cleansing, surprising and at other times there was great sadness involved. I am ever so grateful for so many who have crossed my path and continue to do so on an almost daily basis. I even learned to let go of friendships that I thought were forever but in fact they weren’t...they were fun and genuine while they lasted and then they weren’t... no second thoughts no pissing and moaning.  ...over and done.

I’ve found that there are still the most gracious people that surround me who I barely knew a year ago but became cherished friends due to their immense concern for me during this year. Wonderfully, most of them are considerably younger than I and I tell them the same thing ... you are the warriors; you will tell the stories that need to be told but most of all make sure when this dark period passes that you have one helluva good time and don’t hold back. The years pass quickly and no one should be held back from enjoying their lives in every way possible.

So, on that note, maybe there will be parts 2-3-4-5 and so on and then again maybe not but I want to feel the life come back to NYC and to feel the freedom I once felt.

Posted by FASHION BY THE RULES at 7:23 PM