Here’s my conundrum: I know this is a hyped up collection and frankly I can say I don’t get it but in the same breath I say who cares. Yes, the clothes appear to be beautifully made BUT explain to me why I find it so yawn worthy and boring. At first I thought it was reminiscent of Delpozo but upon second and third examination it is a distant cousin. 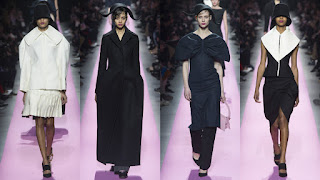 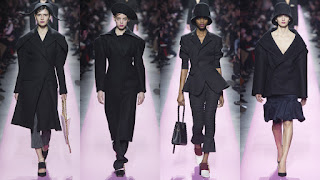 Yes the clothes are rooted in volume and sculptural aspects and yes many of the silhouettes are wildly exaggerated especially in the shoulder department but after that what’s left? An absence of color induces the sensation of ... Didn’t I just see that … it is then that the lack of color becomes a source sameness. The draped pieces come off a bit heavy handed if not just plain odd. Apparently the hats set a mood each season but can someone tell me that mood? Apparently my memo got lost in the mail telling that I MUST love and pander to this collection. I don’t love it … I don’t hate it...I am ambivalent…  I just want to know what all the fuss is about… simple! 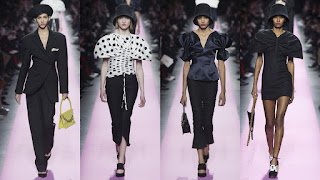 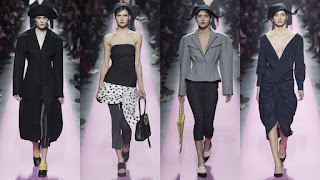 PS ... maybe it’s the smorgasbord of references which include Ric Owens, the Japanese, Delpozo to name a few
Posted by FASHION BY THE RULES at 7:59 AM