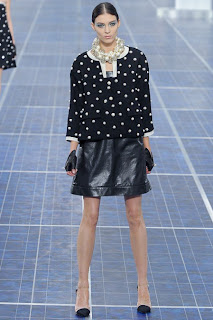 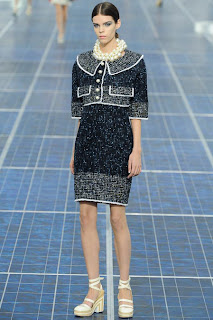 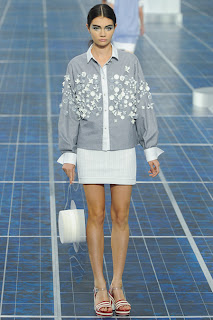 As promised by Monsieur Lagerfeld at a press preview yesterday, there would be “no smoking” or more appropriately no smokings! True to his word, the collection that Mr. Lagerfeld presented today was all about the house codes or the brand’s DNA. The were pearls, mountainous necklaces and cuffs of them, jackets of every conceivable length, mostly abbreviated and tweed, which were actually tweeds or tweed that was embroidered and embellished to look like tweed and then there were the classic Chanel silhouettes that built this brand into a household name without ever losing its reputation for fashion and style.

From the very first exit, you knew there would be black and lots of it and there would be leather but just how much was kept a secret. Then there were the jumble pearl necklaces and then the pearl cuffs which appeared with almost every single passage. You could not help but notice the box bags and clutches as well as the ginormous crescent quilted piece which appeared with the solo swimwear style in the collection. What about the ginormous lazy susan sized plexi boaters? Lastly, there were the shoes which again were limited to a few styles and paraded out in abundance. I am still a fan of the classically grounded cap toe pumps which was shown in the last segment of evening wear.

Another point of interest here is the return of the shoulder which has been showing up on runways for weeks now and no doubt will make a formal return for Fall 2013. The bell sleeves and skirts or possibly the shaped skirts were present and accounted for here as were the skinny pants cum leggings which popped up at intervals during the presentation. Mr. Lagerfeld took a seasonal stab at denim again as he had for Resort but expanded his affection for the color blue which appeared frequently during the show. Can we talk how Mr. Lagerfeld felt compelled to show some of his evening pieces with hose which delights me no end and they looked pretty damned great.

Evening presented itself with probably the least challenges as the silhouettes remained quite simple and repetitive. There was the raised waist or possibly empire look and then simple classic columns and shapes that are emblematic of the house. Evening was mostly black which was no surprise but the exquisitely embellished white floral columns were spectacular in their simplicity as was the one long sleeved all white crepe column with dropped waist.


A few standouts were, as mentioned, the white gown, the dark and multi “eyelash” detailed pieces, the fabulous grey cotton shirt with flowers, the tweeds of varying construction and they was that Lagerfeld used his color after starting in that no color theme of the season. He judiciously used leather here and there without it ever becoming a major point and it is quite apparent that, no matter what, the classic Chanel customer is never ignored and that is commendable in this day and age when brand think their customers will switch to whatever look they are promoting that particular season.

Mr. Lagerfeld has indeed shaken the money tree one more time for Chanel!
Posted by FASHION BY THE RULES at 9:33 AM