Again these are 2 collections that are polar opposites of each other; one of them is more traditionally “Japanese” inspired while the other is decidedly more European inspired.

Degree Fahrenheit is most definitely inspired from the current school of European designers.  References might be found from Lanvin, Pucci, Jil Sander and maybe even Elie Saab.  The collection was presented in all white which certainly becomes an issue but the clothes are definitely more classically designed and for European and North American consumption.  What can be gleaned from the grouping is that there is a possibility that some Japanese designers are suffering from what I call “NY Syndrome” which is when the collections showed after Europe, the designers were often said to be using the Europeans as immediate inspiration.  All this being said, the take away is simply that there are some good clothes here but they need to have a bit more originality and some better “fitting” when doing runway.

Ne-Net is most definitely of the Yohji, Rei and Junya  school of design and just in case that isn’t enough, toss in Marc  Jacobs, Thom Browne  and Marni as design inspirations.  The end result is very “emperor’s new clothes”  and certainly greatly influenced by the great and original Japanese designers of the 20th century.  This time I am not sure I can say that the collection needs to be dissected as there are so many distractions going that it is hard to know for sure if this is the case.  The head gear alone can fill an exhibition and the incessant layering that is so prevalent in Marc Jacobs’ collections surely takes away from what might be hidden within the strata of clothes.  I believe that there are those who do it better and within this category there is no need to increase the stable of designers who offer apparel that looks like this. 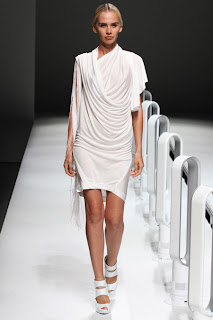 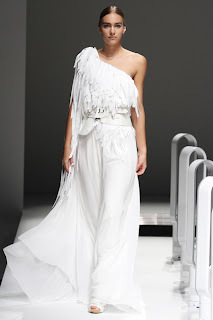 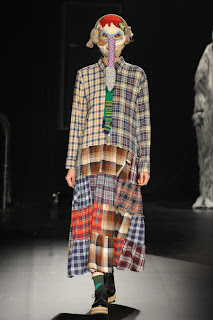 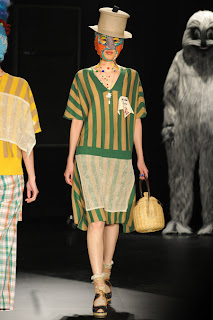 Posted by FASHION BY THE RULES at 3:40 PM