Motonari Ono is a collection that deserves an A+ for presentation.  The first half of the show had the collection being shown on dress forms that were carried down the catwalk by models and then the second half was the conventional model as mannequin method of showing.  That kind of originality is what makes the fashion world take notice no matter what else happens on the runway and it kept my interest thorough out.  The clothes have a decidedly Japanese tone but not in the Rei, Junya, Yohji kind of way; the clothes exude an Asian kind of sweetness that you see many Asian women wearing  especially in Hong Kong and Tokyo.  There is a school girl charm about them which might make them a bit cringe worthy on a woman of a certain age.  A little color might have upped the sophistication level and elevated that saccharine look to something a bit more urbane.

Dress Camp can only be described it he simplest of terms and comparisons.  Here is my take away from this definitely street wear savvy collection aimed at both young men and women.  I would like you to think the following; what if Addidas and Donatella and Gianni Versace collaborated with YSL (the original one) who then met Roberto cavalla Cavalli and then jointly designed a collection with Ricardo Tisci of Givenchy who then meets and teams up with Jeremy Scott.  Take a look and see if you don’t agree!  And you may want to add a dash of Jean Paul Gaultier into the mix. 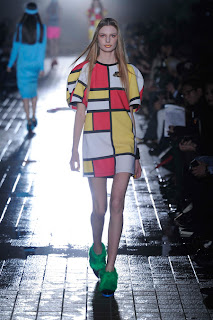 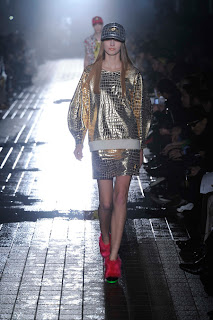 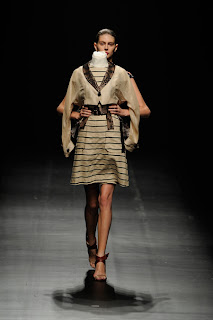 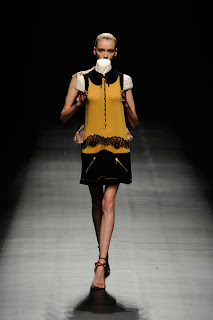 Posted by FASHION BY THE RULES at 9:26 AM