Is it too corny to say that there is a new sheriff in town? The metaphor of the Wild West, Chanel and Ralph Lauren is the combination that comes to mind and might I say “Whoa Nellie!” 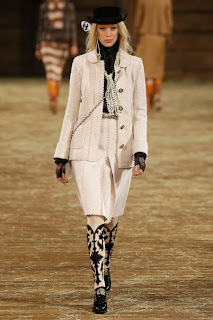 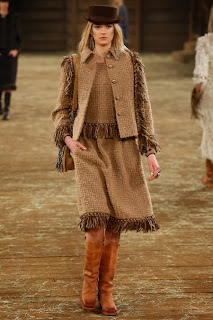 This is the Chanel show that puts every other show to shame every year as this is the show that shows off the unimaginable talents of the ateliers that make up the Maison Chanel. The company has wisely acquired every one of these small shops who have mastered an art that is an essential ingredient to the world of Haute Couture. 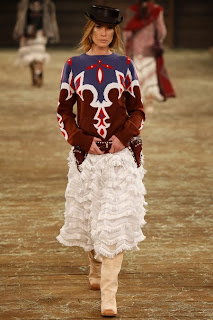 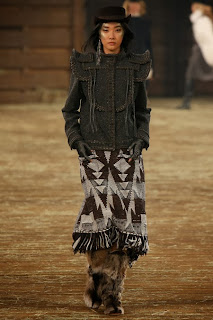 Karl Lagerfeld enjoys the luxury of the world most astounding artisans and this season he has sent them to Texas, the Lone Star state, and in the process he has reinvented what we once thought of as American classics. Karl shows us lariats of pearls not rope and guns of gold not carbon and serapes, Indian blankets and ponchos of cashmere not coarse wool. This is, of course, all compounded by miles of fringe and just about every feather that could be found in the world all tied into embellishments that have never even ever been dreamed of before. 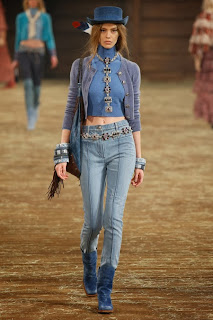 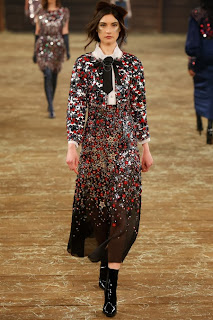 There really is no point in trying to dissect this as a collection of clothes that reach the customer as here is where the customer comes to the clothes and that makes this flight of fancy an amazing spectacle of what is possible when one has imagination and the means to turn fantasy into reality. Prairie skirts and chaps and knee high “quasi” boots and stenciled “Frye” cowboy boots and men’s clothes are only small part of what can only be called a fashion spectacle as well as a newly imagined Wild West. It is Chanel flexing its muscles and Karl showing the world that he is indeed still the Kaiser. One might even go so far as to say...Hubris! But then again, that’s not very shocking is it? 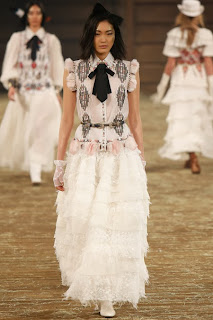 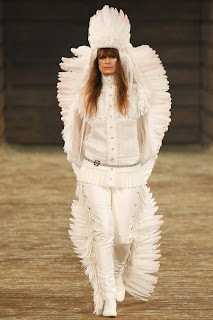 P.S. please take note of a new meaning for “saddle shoulder” as well as new definition for American Indian jewelry, 21st century denim, couture Frye boots and fur mukluks!!!!!
Posted by FASHION BY THE RULES at 11:52 AM