While the media pundits will no doubt hail this as groundbreaking, well from its beauty, declare it exquisite, and declaring how unbelievably well designed and so so original, facts are facts... one of those being this; if the collection is all of the above, then why does a critic or reviewer spend more than 450 of oddly 700 words on front row and venue in their review? Then again there is this minor detail which is the collection is only marketed in Saks Fifth Avenue (my guess is nothing ever on sale and all merch supplied and owned by LV) and in its own  on the  A stores of its 460. Lastly it should be noted and NEEDS to be considered that this is a collection of stratospheric retail prices. That said, now we can begin ... by the way... this was CONTEXT! 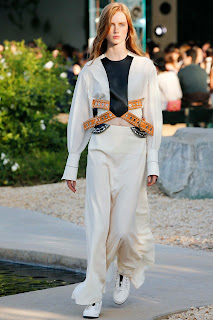 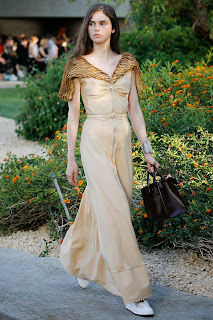 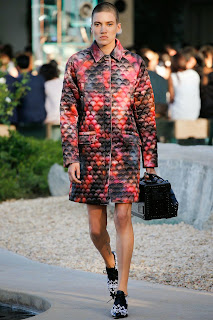 With all this being out there and in your mind, I must say that I think I saw a few pigs fly by my window as I actually found some pieces that looked quite beautiful and even wearable provided you are a trust fund baby or just lucky enough to be a willowy size 8 or less with an immense clothing allowance or with a 7 figure job. 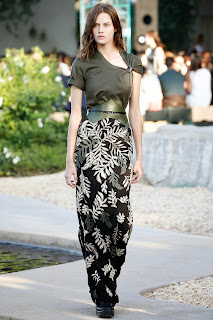 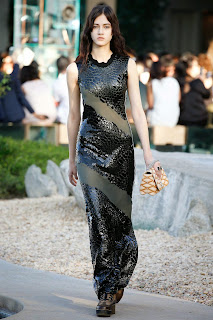 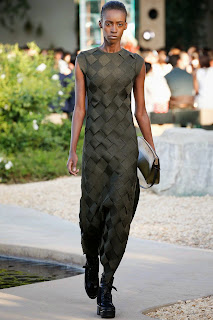 Of distinction were the laser cut leather dresses at the end, the “intricato” black gown, the 2 croco and georgette pieces that looked as gossamer as devoré, the Mondrianesque sequined jacket and even some of the drawstring pants.  There was one bronzy hued 40’s dress with a paillette like fish scale middy collar that was singular in the detail of the collar but little else as was the beige and black  laser cut dresses that were outstanding more as a works of art and craftsmanship rather than as an articles of clothing. The deeply quilted mini bags will surely be fodder for the accessory market while the hard bags remain a sort of silly accessory for fashion victims worldwide, especially when one considers the digital accessories and make up they must contain. I would be remiss if I didn’t mention the excessive amount of prints from the mundane chain link to an oddly Hermès looking one. 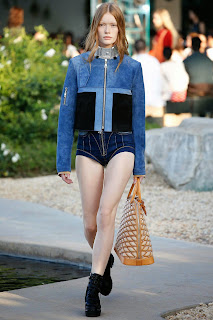 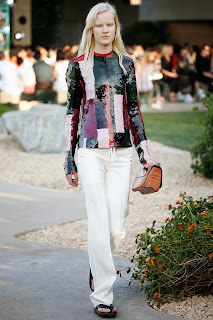 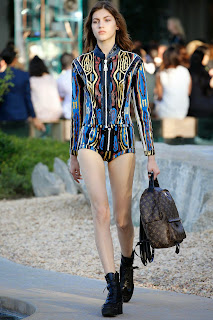 So, the patent flip flops will be in every store from Forever 21 and up in the food chain as well as versions of the trainers, desert boots and motocross jackets. Somehow I can’t imagine even the most voracious fashion vacuums sucking up hot pants and cropped jackets to be worn as the preferred choice for running off to lunch, the office even if you are the CEO or supermarket. Then again, even the most studied victim may not have legs that need to be insured! Oh!! And housecoats are your guess!!! 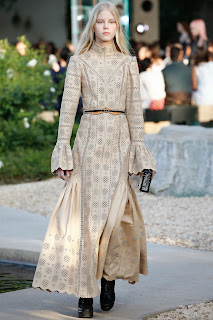 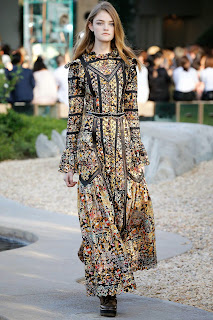 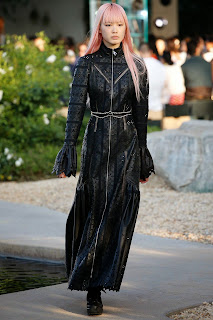 Call me old fashioned but the excessive amount of cropped and abbreviated jackets is just that and the juxtaposition of stiff leather standing away from the body in a criss cross or played out as pocket details seem oddly clumsy. On the whole one could say it was okay, it had its moments, and yet somehow it wouldn’t be a stretch to see it hanging in Zara or H&M albeit not of the same quality. So, what’s the fuss other than the enormous sums of money that are being spent to try to convince the fashion world that Nicky is a force to be reckoned with and that LV is a major player in the fashion business as well as a mega brand!
Posted by FASHION BY THE RULES at 8:14 AM