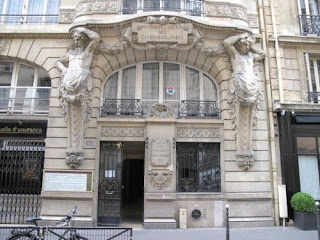 As with any exclusive club whether professional or social, the federation is one of the toughest organizations to join or be accepted to especially if you are not French. This season the “chambre” has decided to lower the bar and its standards, requirements and qualifications to now be scraping the floor. With the inclusion of brands like Area and collections like AZ Factory, Charles de Vilmorin, Julie de Libran, this organization has unknowingly equates the master works of Chanel, Christian Dior, jean Paul Gaultier, Givenchy, Versace, Valentino, Armani, and many more who far outshine these new additions and yet far more talented and established brands, especially from the USA are rejected. Do you suppose that the Federation is feeling the heat for being racially biased or far too discriminatory as well as well realizing their requirements are far too stringent and are making up for that by  offering memberships to rank amateurs who happen to have made a dress or are able to sew.

The question is if you were a member of let’s say, the Everglades Club and they suddenly decided to relax their standards and admit the trash collector, might you be insulted, if not outraged? The same might go for the Yale and Harvard clubs should they suddenly decide to accept a high school dropout.  Do not think that our precious CFDA which as been renamed by the illustriously over rated Tom Ford is any different or even was any different under the leadership of madame Von Furstenberg. These kinds of exceptions and lowering of standards diminish these organizations' importance as well as agitate their own and might even insult or infuriate existing members.

I, for one, am appalled and severely disappointed as a fashion observer and I’, quite sure this has spurred great animus among those whose inclusion has been turned down in the past. Below you will find the so-called charter and mission statement of the Chambre Syndicale de la Haute couture and you tell me that they have defiled themselves by adding those who are far less deserving that the the rejected candidates.

SHAME ON YOU… it makes me think that money talks even with in an association like this and that saddens me greatly since fashion is in such a precarious and nondirectional point in its life during these less than perfect times.

The Fédération de la Haute Couture et de la Mode brings together fashion brands that foster creation and international development. It seeks to promote French fashion culture, where Haute Couture and creation have a major impact by combining traditional know how and contemporary technology at all times. It contributes to bolstering Paris in its role as worldwide fashion capital.

The Federation numbers some one hundred members, amongst whom feature the most emblematic brands on the global stage. It comprises three Chambres Syndicales or central bodies (Haute Couture, Women’s Fashion, Men’s Fashion).

Haute Couture is a French exception and as the name of the Federation indicates, it lies at the heart of fashion’s ecosystem. Tremendously modern, it is a permanent gateway between a tradition for excellence in know-how and contemporaneity in creation embodying today manufacturing techniques that are at the cutting edge of innovation. The Haute Couture collections are presented twice a year, in January and in July.

Due to its extraordinary nature, it has been granted a special status. Since 2010, its official calendar has hosted the Finest Jewellery Houses that are affiliated to the Federation. This initiative allows for a synchronicity of presentations, but also enables the history of two sectors with exceptional know-how and both in a state of endless reinvention to be played out in sequence.

The origins of Haute Couture are attributed to Charles Frederick Worth who in 1858 founded the first true Couture House at number 7, rue de la Paix in Paris. Before that Rose Bertin, Marie-Antoinette’s « Fashion Minister » had foreshadowed it, being the first to start freeing up the female body, all the while adorning her creations with embroidery, lace and rose petals.

Only those houses and companies that are approved each year by a dedicated commission run by the Chambre Syndicale de la Couture and held under the aegis of the Ministry for Industry may become eligible for it.

Its primary field of interest being handmade work accomplished within these Houses’ workshops, a laboratory for ideas and techniques, a space where creativity can flourish freely : this is Haute Couture, whose international renown has always remained true to itself and has contributed to making Paris fashion capital of the world.

Haute Couture stands out by the uniqueness of original models created each year, and the customization of these models which are then crafted to fit the client’s measurements.

Both Haute Couture and contemporary Finest Jewellery at times heckle and upset academic forms in order to move along with the times. They offer extra sensoriality and fantasy that are undeniable in addition to remaining true to the utmost modernity by being nourished by the latest technology.

Fashion is today an endless field of expression and creativity but also an industry composing a major pole of french economy. During Paris fashion Week®, the capital becomes one of the most important financial hub.

Posted by FASHION BY THE RULES at 8:46 AM