Here are my takeaways:  sleeves either pushed up to  bicep level or  long enough to  cover your fingertips, fabrics that look like they came from the 50’s like Naugahyde  and  bonded foam like solids,  bomber jackets again , odd  shaped mini cases  sewn on sleeves,  gloves or  center back of jackets, the overuse and desecration of a  logo, call then   catsuits, onesies, union  suits (call them what you will)  in  knits, some bright  colors,  high water pants and  puddling pants, silver  dollar sized pearl  buttons on  coats, lots of  double breasted, of  course lots of black and  oh yes… lots of  gloves…gotta sell something! 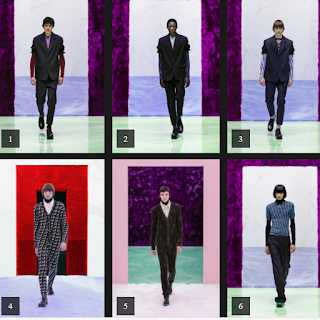 
These 2 self-appointed/anointed visionaries of fashion produced a so what collection of clothes where styling took the starring role and god knows I’m sure there is tons of blah blah blah to accompany the basically pedestrian collection but of course the rhetoric is as high minded as for a Rhodes scholar. 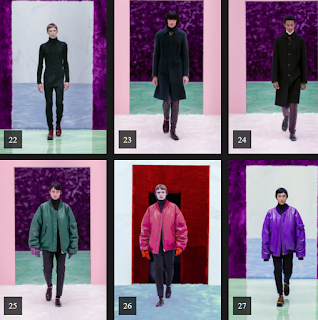 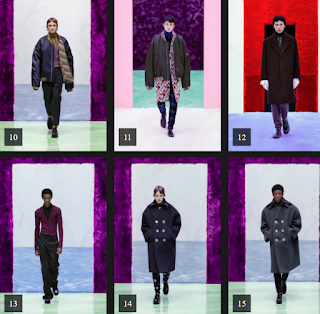 I’ve never been a fan of Miuccia or Raf but at least she was a magician in terms of turning a handbag brand into a juggernaut while he is just a hired hand who fails each time. 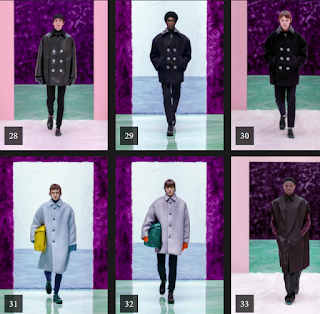 To me, it’s a non-collection... just another pile of supposedly trendy clothes that cost a fortune and in the general scheme of life as it means nothing! 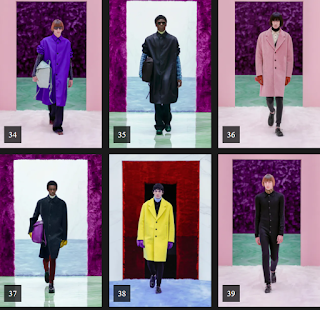 As the police say at the scene of a crime when it’s taped off…keep on moving nothing to see here!