The System is Broken .. an editorial


With many of the heritage brands being reignited as supposedly au courant fashion, it has occurred to me that the system is indeed quite broken. The question is if it is irreparably broken or can it be resuscitated back to its proper purpose and that is to sell clothes. 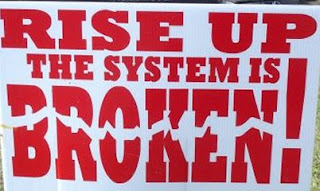 First LVMH appointed Raf as a creative director. Whether or not this was a wise choice, it really isn’t for me to say even though I abhor what he stands for and what his output has been. Yearly sales at Dior, as a brand, have risen but take note that apparel, including haute couture is not broken out in terms of what has grown under his reign. My gripe has been if you have a heritage that has a rich history and a huge archive, why must it be totally reimagined rather than its history massaged and evolved as a brand for the 21st century. I fear the next disaster waiting to happen to is the once esteemed brand of Bill Blass.

So, now after the supposed success of Saint Laurent, we have all sorts of assistants, fledgling and self-inflated designers being appointed as creative directors for breathing heritage brands or just these old school fusty names that must have been purchased for no other reason than attention or in hope that anyone might recognize the name they just paid for. Cases in point are Carven, Courreges, Vionnet and even Paco Rabanne; lest us forget Ungaro which has suffered numerous disastrous designers. Yes, there have been reimaginings that seem to work such as Balmain, Mugler and a few more but even those bear no resemblance to what made the names great or famous… so why use these names other than for attention? Keep in mind that just because a designer says they have been inspired by the founder, the end results are usually that you just shake your head from this convoluted and self-inflicted delusion.

Next up is a fawning media with the sheep mentality that seems to only be interested in garnering ad dollars and certainly not offering any insight or real opinions about a collection.  What happened to critics who actually understand what they look at and honestly have an authoritative voice rather than just the regurgitation of a ludicrous press release whose words usually belie what has been presented or even worse described in a single word like … FABULOUS!. Fashion is not a cerebral profession, you don’t have to be a Rhodes Scholar to design clothes but you must have talent.

Talent is the next logical topic. While the skill set is highly individual to each designer, it is safe to say that these mega brands should require designers to be able to sketch and drape and not just espouse enigmatic inspirations and point. It is said that Raf would never meet with a private client even though the house does haute couture and it is my assumption  that he is either a misogynist, afraid of the female body or has never been in a fitting a room with a female. Designers need to be designers and not in charge of store design or advertising. There are such HUGE disconnects within brands such as Saint Laurent and Dior. We have Hedi’s moody trashy Helmut Newtonish photos for apparel then we have glossy Maybelline type ads for cosmetics not to mention the disconnects within the brand extensions such as printed lipsticks on shoes and handbags as if they were made for H&M. Take for instance Jennifer Lawrence in a Dior handbag ad who seems to not want to touch let alone hold or own the bag. Instead of hiring legions of design staff, let those equipped with the proper skills direct things such as store design and advertising and brand extensions. If fashion has become just another arm of big business then it should be treated as such. After all, you wouldn’t allow a bookkeeper to prepare the quarterly earnings report for LVMH, now would you? You can’t hand over the reins of a major brand to a creative director who has the skill set of an assistant or a vendeuse!

Having spent decades in this business, it is my opinion that yes, fashion and retailing have changed or evolved or whatever but the facts remain that women want to feel sexy and attractive when they spend thousands of dollars on clothes. They do not want to look like they are dressed for Halloween in May and even though today’s client is more body conscious, their essential concerns remain the same as they did 40 years ago. Case in point; women of every age, let alone women of a certain age, do not ALL want to wear sleeveless dresses! Furthermore they are forced to in great majority as when you tour any store, a dress with sleeves is as rare as hen’s teeth! So we can now speak to the reality of who is your brand's demographic?  Age?  Body type?  Disposable  income?  Or in other words the who, what and where of your supposed client. Carry on all you want but Gucci girls who want to look like nerdy schoolgirls can’t afford to spend $6000 on a dress and so they get their version from the thrift shops and various fast fashion chains and the same goes for Hedi’s clients. BTW, the thrift store, well that’s where so many of these designers get their new groundbreaking ideas.

IMHO. It is what happens at Dior that will determine the long term fashion climate. I firmly believe that if Arnault or whomever actually takes the bold step of hiring a seasoned designer to restore Dior to  its proper place in the fashion pantheon, then well… all the kids of fashion better be worried ... really worried.

PS ... yes …  I use Hedi and Raf as whipping posts but there are legions more who fit the bill
Posted by FASHION BY THE RULES at 8:49 AM