As always, when there is too much explanation and too much chat about a collection, there is inevitably a problem with the clothes. As is usually the case with Miuccia Prada, she loves to expound about the whys and hows of her collections and most of it is just gobbledygook for this is what I want to do so I did it. This season is absolutely not an exception.
So, we have Ms. Prada’s take on “in 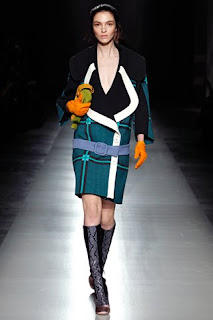 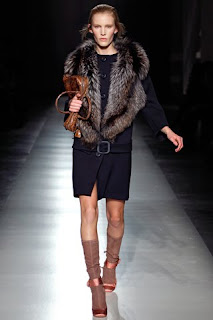 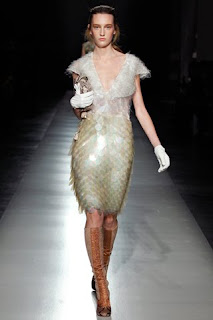 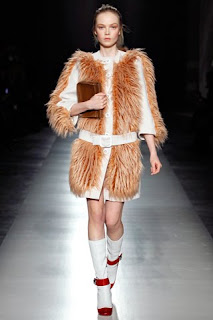 nocence” which equates to a lot of very unflattering unaffordable clothes with few exceptions. Yes, there is an YSL homage to his Mondrian shift and if one were to thinly stretch references, one might say to Norman Norell and his fish scale sequin mermaid gowns. The difference being is that Ms. Prada exchanged sequins for pailettes in almost translucent tones and the Mondrian reference took on a more somber if not plaid effect. Now, combine this loveliness with dropped waists, trompe l’oeil snakeskin boots and add the 1960’s references and what have you got …..nothing too pretty. Somehow, the very first passages were deceptively encouraging while conjuring up Jean Shrimpton in a chin strapped helmet and over the top movie star sized sunglasses, but that image was quickly obliterated by what followed.
Sticking to my own discoveries, if the clothes need an explanation, then how will they sell when they are just hanging there on a rack ….Ms. Prada will not be pitching them and I highly doubt that your salesperson is that well versed in the inspirations and references that Ms. Prada used while designing said collection.
If one thought that this past Spring was difficult, well then they hadn’t even imagined what was dreamt up for fall.
Posted by FASHION BY THE RULES at 1:07 PM