It was a golden anniversary celebrating Karl’s record breaking years of collaboration with the house of Fendi. This was no ordinary Haute Couture show, this was Haute Fourrure and it was the “hautest.” If anyone knows anything of what this brand stands for when it comes to fur, they know that fur is treated as if it were any woven fabric. That said, the fur was knitted, embroidered, pieced, shaped and manipulated in just about anything else you can do to a piece of fabric. The result …                MESMERIZING! 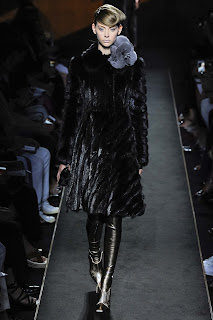 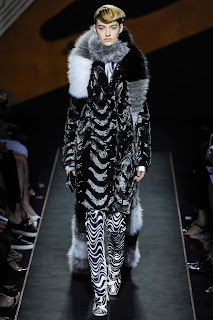 From the mundane mink to sable to astrakhan to every imaginable fur and if that wasn’t enough there were enough feathers to fill an aviary or two. The silhouettes and shapes ranged from the most staid of lady coats to egg shaped capes that were nothing short of show stopping to blousons to boas of unending lengths. Let’s just say that if you are going to mount a show like this you better make it count and WHOA Nellie! 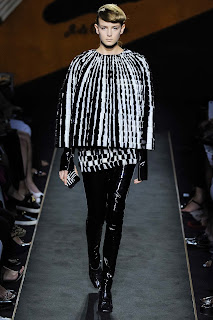 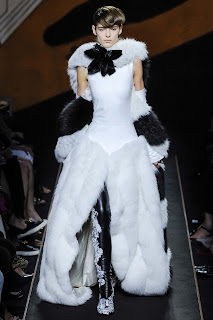 Some of the patterning resembled what you might see on the monitor of a life support system but this was hardly a collection that needed any assistance in providing or sustaining life or in this case the heritage of the brand. This was an unbridled display of Fendi’s muscle and prowess which is second to none when it comes to the art and craft of furs and leathers. The possible “analogy” of a life support system with the brand is a very tongue in cheek comparison as the house will be alive for generations to come due in no small part to the contributions of Monsieur Lagerfeld. 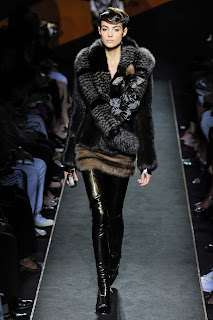 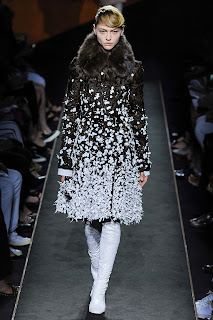 There are techniques that boggle the mind and test the limits of imagination which would have made Anna Piaggi swoon due to a case of the vapors. These are furs for aficionados and cognoscenti but most of all these are furs that demand to be noticed. There are not furs that you own to stay warm as they are of the “look at me” variety. The combinations of furs and feathers are beyond ones comprehension of the process it took to “build’ these pieces. PETA be damned! 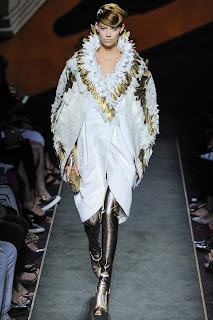 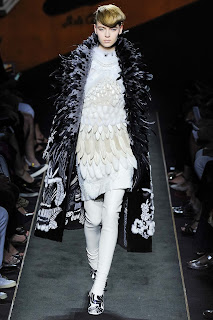 So, in essence, Fendi Haute Fourrure embraces the precepts and concept of Haute Couture in the same ways as “normal fashion” does. By the way, a show of this caliber surely put some designers to shame as this was an instance when one could experience the ecstasy of fashion rather than the agony! 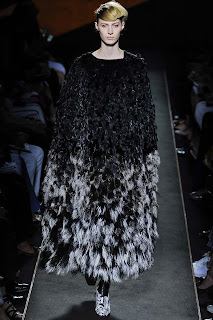 PS ... it should be noted that this show was “styled” to perfection...  no gimmicks no bull ... just beautifully coiffed and made up women on a runway wearing exquisite pieces that were designed specifically for that moment
Posted by FASHION BY THE RULES at 8:05 AM