Wow! OMFG! Astounding!  Just a few choice words to describe one of Haute Couture’s shining moments.  The occasion was the Fall collection of Jean Paul Gaultier.  I guess he didn't get the Raf memo about “modern Couture’ because this was a collection that reeked of the heritage and the tenets of what is true and genuine Haute Couture.

The excitement that was experienced by seeing a collection like this is palpable to the point of experiencing a visual orgasm.  First there is the spectacle which was ONLY about the clothes and not the set and not the venue and not the blah blah blah. Style .com will be at a loss if they have to discuss the clothes and WWD might just give it a nod as being just more of the same, but trust me gang, this was freaking AMAZING!

Yes this is JPG using the brand DNA and pounding it home with such great ease and such grace that it boggles the mind.  As this reviewer has said countless times, first and foremost it must be remembered that JPG is a tailor and one can’t help but see it here.  He honed his “chic” when he was at the helm at Hermes and once he began doing Haute Couture, it was unmistakable not  to have known that this once enfant terrible of fashion had grown yup and mastered the art of chic!

The overall excitement of the collection is literally drool inducing… one cannot help but marvel at the imagination and technique and VISION that this man had when he put this all together.  The hair, the drama, the palette, the CLOTHES, the workmanship and all at once you were just rendered slack jawed by breadth of this collection. 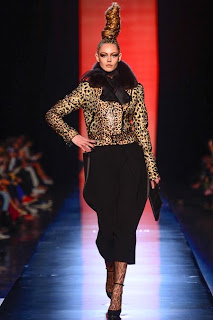 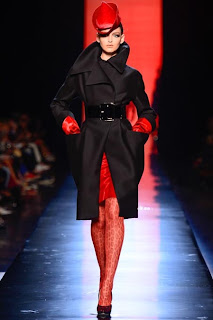 Are you getting the point here? This was just stupefyingly, jaw droppingly and startlingly fabulous.  Sorry it wasn’t as exciting as the pile that was offered as” Modern Couture” but hell, Monsieur Gaultier will just have to try harder next season… that is to say if he is not stampeded by the those of the 1% who can afford to won one of these masterpieces. 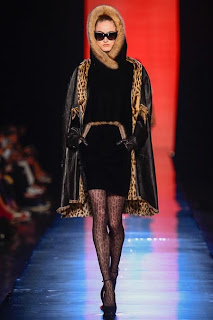 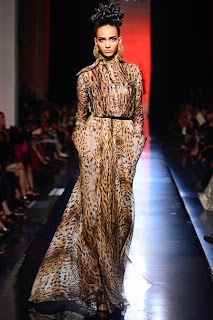 The upshot is, please don’t think for a hot second that every single piece was beyond criticism but when the big picture is as boundless as this… who cares?  I was a little put off by the Lady Marmalade/Larry Legaspi looking pieces as well as the way way over top ones but then again, once I thought about what it took to render these pieces with such precision, my feelings were ameliorated. Take that Tim! 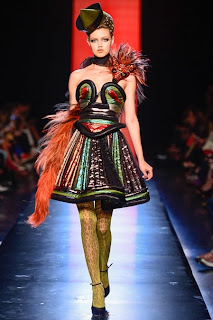 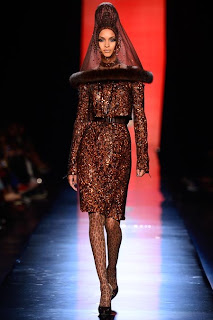 I can gush no more but please feast your eyes and please do look for a complete slideshow of the presentation.