Just when you thought 90% all reason and taste had flown out the window, in charges Giorgio Armani on his white horse!! Yes, Raf, Mr. Armani is all about his DNA codes and the Armani vocabulary which in your book would make his collection old and tired … NOT!

Let’s just say that seemingly all 50 odd pieces of Prive wouldn’t weigh as much as 2 suits from the thoroughly modern Dior collection... laughable to be that drunk on your own Kool Aid.
With the most abbreviated of palettes Mr. Armani shows off what he does best and that is to give his ladies exactly what they want .. Whether it is an impeccably tailored day or evening suit, a drop dead evening gown or something for low key relaxed evenings when you just don’t want a gown.  In a word, the clothes are sublime. 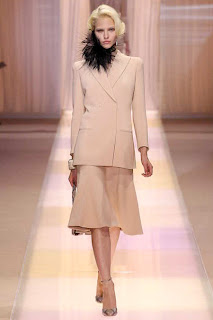 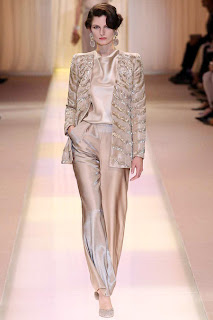 The big picture is about the assets of a collection and not its debits.  Anyone who knows the breadth of the Armani body of work knows that he has a propensity for some design transgressions that don’t always sit well with critics and to that I say... who cares?? 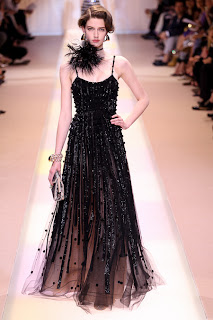 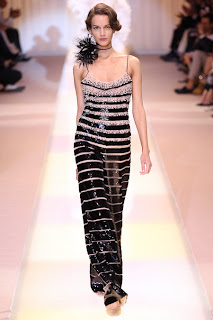 Even though Mr. Armani arrived late to the “party” that we know as Haute Couture, his percentages for arresting and spectacular collections far outweigh any particular misstep within a collection.  This season is no different.  There is only once collection that comes to mind that was heavy on deficits and so I say... who cares! 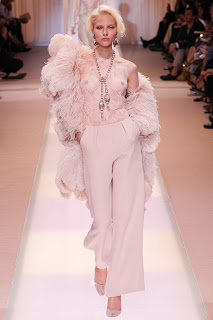 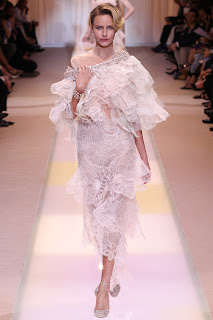 With all the philosophies and blah blah blah that have been expounded upon, transmitted and written about, the end result is always the same. .. Were the clothes beautiful or not?  Yes, it is largely dependent on whether or not one’s eye is tuned into the same channel as the designer but in my head there is a universal unbiased opinion that rules all esthetics.

Words don’t make clothes beautiful.  Designers design if they have the talent.  Every designer should be held to the same standards and there should be no leverage offered just because they have “mother ships” behind them as backers.

Bottom line is simply this, Mr. Armani does what he excels at his craft and he really doesn’t give a crap if you like it because well.... how large is your business in dollars and cents?  And, oh yeah, he owns it ALL.  It is his way or the highway and if you piss him off, you are banished and end up whining to regain entry.

Brava Mr. Armani!
Posted by FASHION BY THE RULES at 5:40 PM