This week the term “modern couture” entered the vocabulary of fashion thanks to Raf Simons who thought he delivered what modern couture should look like.  Unfortunately for him, talk is cheap but in his case he does love the sound of his own voice while he espouses all this drivel while thinking the clothes will get better once he spreads to word… WRONG! 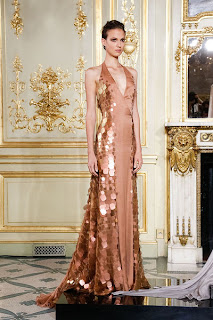 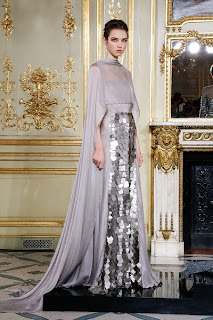 Rami Al Ali DID deliver modern couture with his Fall 2013 collection.  Mr. Al Ali accomplished his feat of modern couture by using the clothes to speak for themselves, hence no blah blah blah!  Raf might want to try it some time.  Mr. AA used all the “unmodern” methods of couture therefore yielding dresses and gowns that are not for everyone and certainly not even for the total 1%. 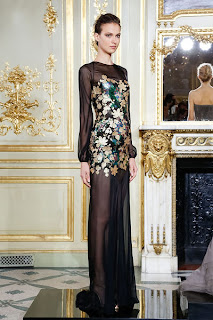 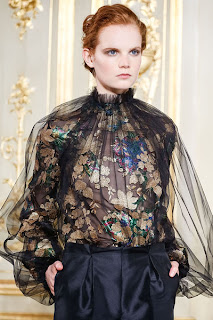 One must sit back in awe of a designer who actually designs, not only the actual garments but explores the materials and methods used to embellish his collection.   What stands out in my mind are the rectangular sequins or mini plates/scales and that exquisitely mini sequin/seed bead all over embroidered tulle which created a fabric of almost impossible delicacy and beauty.  What a concept not to use plastic coated fabrics and techno fabrics as the reason to call your clothes modern couture! 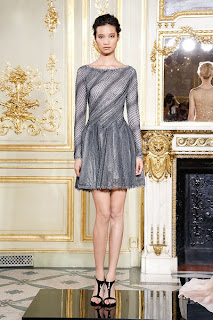 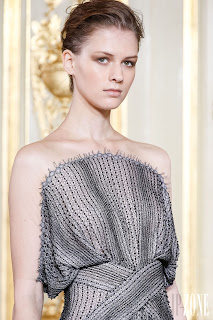 So, not only has Mr. AA displayed his technical expertise when it comes to his embellishments and embroideries but the “make” on the clothes is exquisite.  He achieves an incredible lightness and almost ethereal quality which is no small accomplishment especially when the pieces are so “decorated.”  I tip my hat to his design abilities and his esthetic and he proves once again that “designers design.” 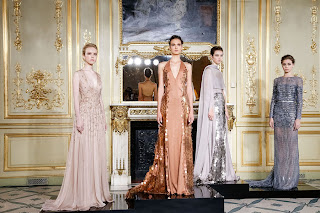 The collection covers all the bases whether bare or covered up and of course the dreaded “W” word… wearable... of course, there is that small matter of price which certainly and substantially diminishes the audience.  One again, Haute Couture is not meant for everyone and if the so called “Modern” client that Raf refers to wants techno ka ka...then she might try H&M couture or Dior!


Think about it... In the meantime have a look at what genuine couture is all about!
Posted by FASHION BY THE RULES at 7:44 AM