While the flock was tweeting, Karl “tweeded” and I would be a moron  if I was anything other than gob smacked by what I just saw. Karl is indeed the Kaiser and possibly the Tsar of fashion these days. The septuagenarian is more modern, savvy and more creative than the self-impressed Raffie could ever be if he lived 3 more life times. If there is a battle of the juggernauts of fashion Karl is the winner and still champion and the likes of Wang and Raffie and Nicky are just pretenders and unworthy options for the throne. 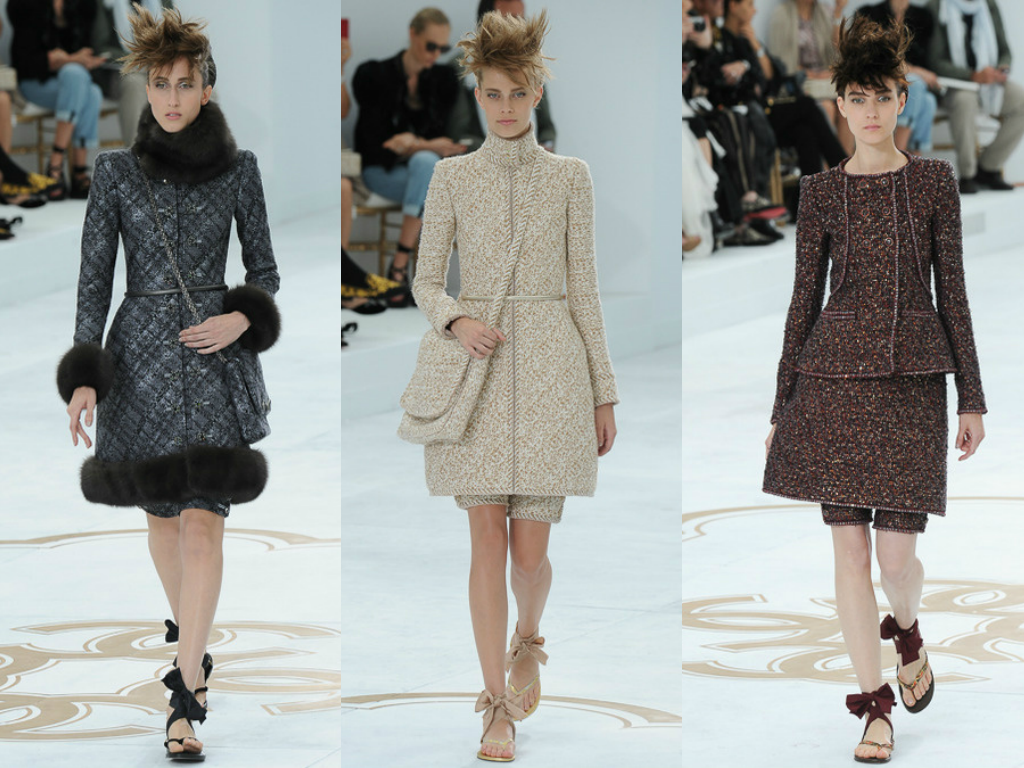 Okay clothes now… Make no mistake that Karl loves a spectacle and while the venue may be imposing, this collection is far more impressive. It is tweed heaven and beautiful dresses to start with. Don’t get me wrong it is a parade, not  a Main Street  parade in Hootervile but the Macy’s Thanksgiving day parade, of beautiful dresses which of course are all layered up for show time but they are there. Karl has always been a merchandising man who knows he has to make clothes to sell even if he his history indicates he could send out a pile of lint and it would sell. The balance of the collection is just tonnage of what makes Chanel what it is. Let Blah Blah and Madame Muchless enthuse and dissect it but why bother? Oh yeah I guess this where ‘Nuclear” makes her shopping list for next year! 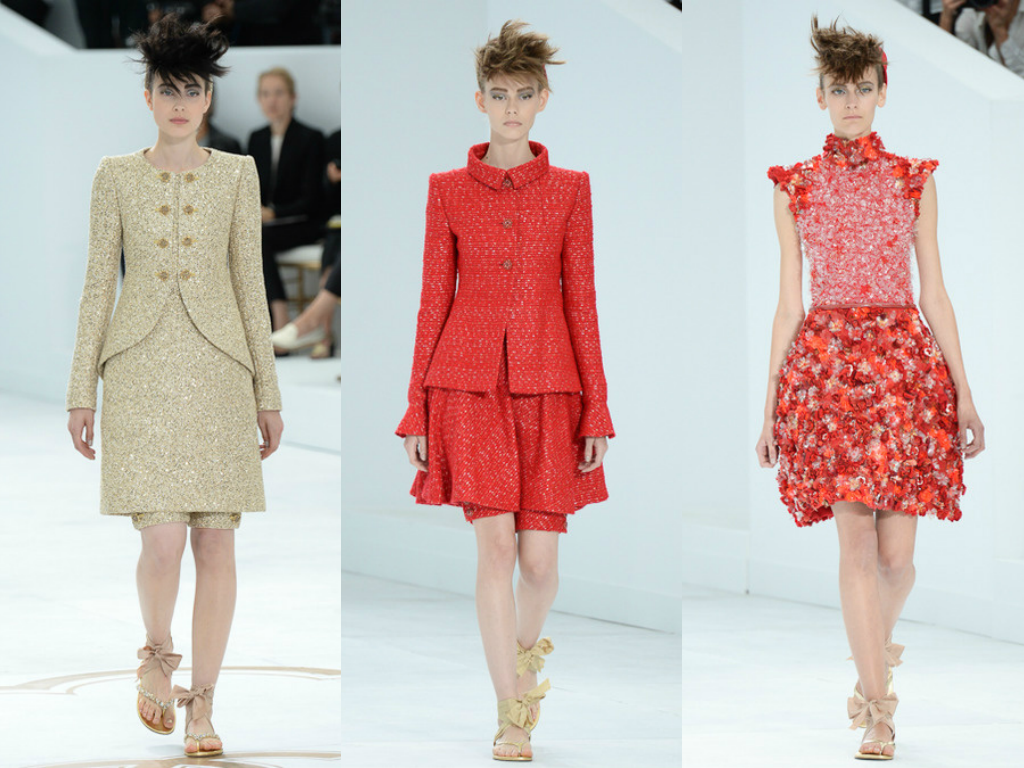 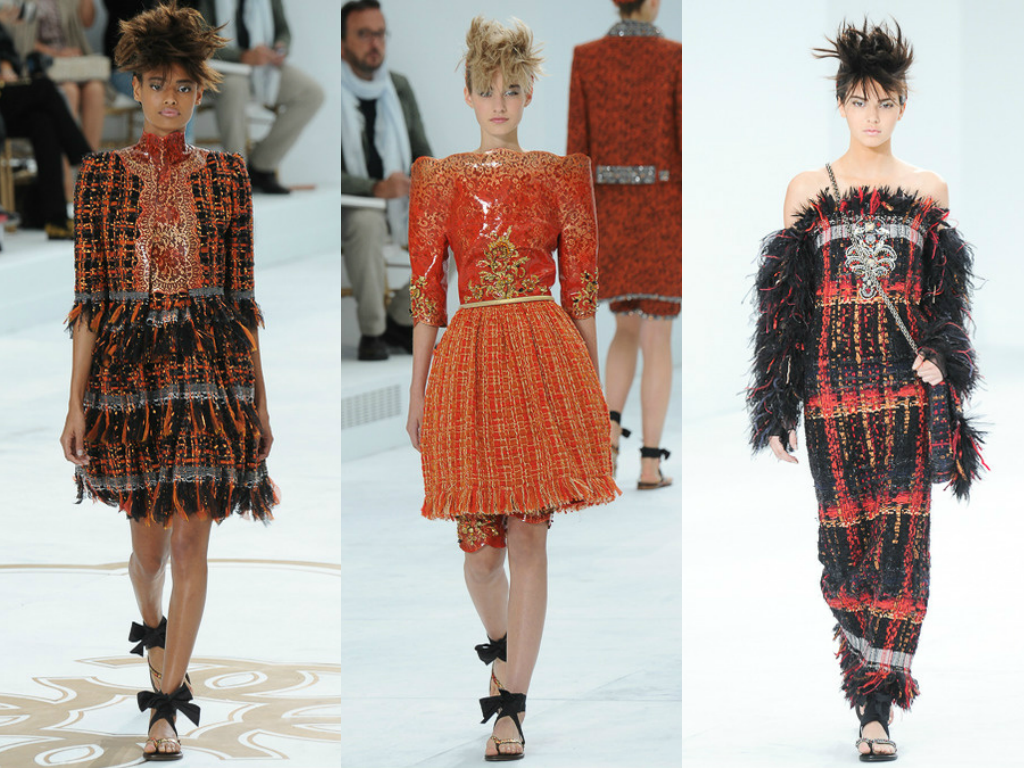 I had to laugh at the “ribboned” up flip flop, which one can be sure, has already been copied in some manifestation. Karl laughs at them all. In a show of this magnitude, there are clunkers but even at his worst he remains on top of the heap. The embroideries astounding, the blizzard of white styles and the variety of silhouettes is more than can be expected, even from Lagerfeld. The ateliers must have been “on  fire” with all this work but NO ONE shows off their workrooms like Karl. 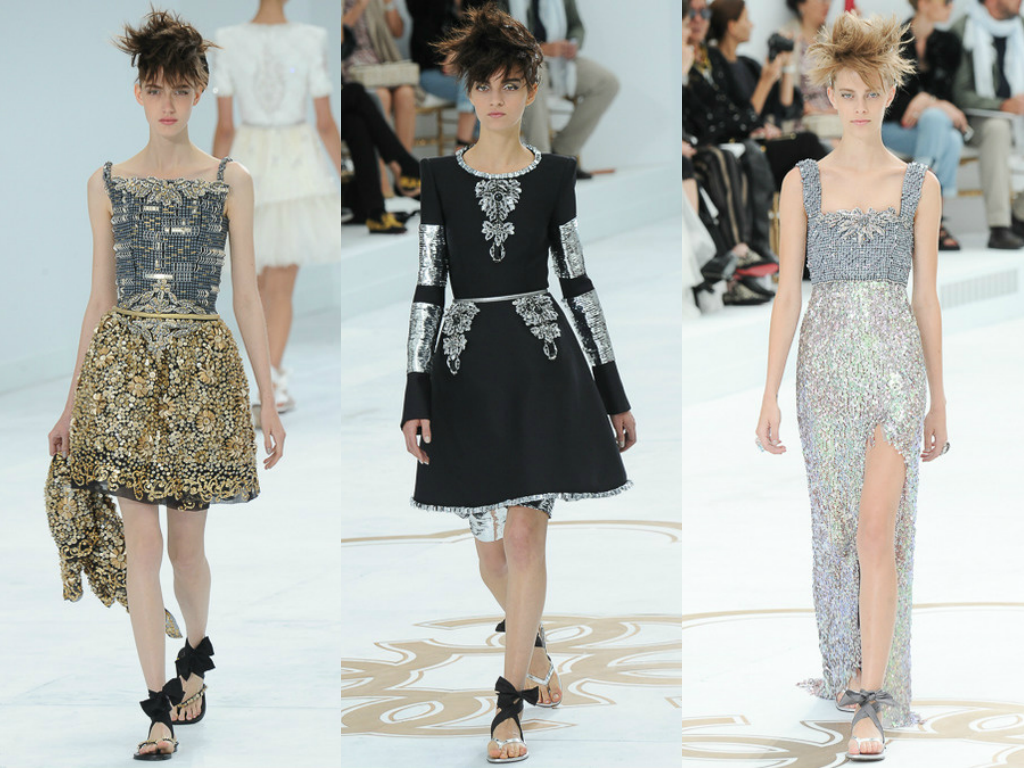 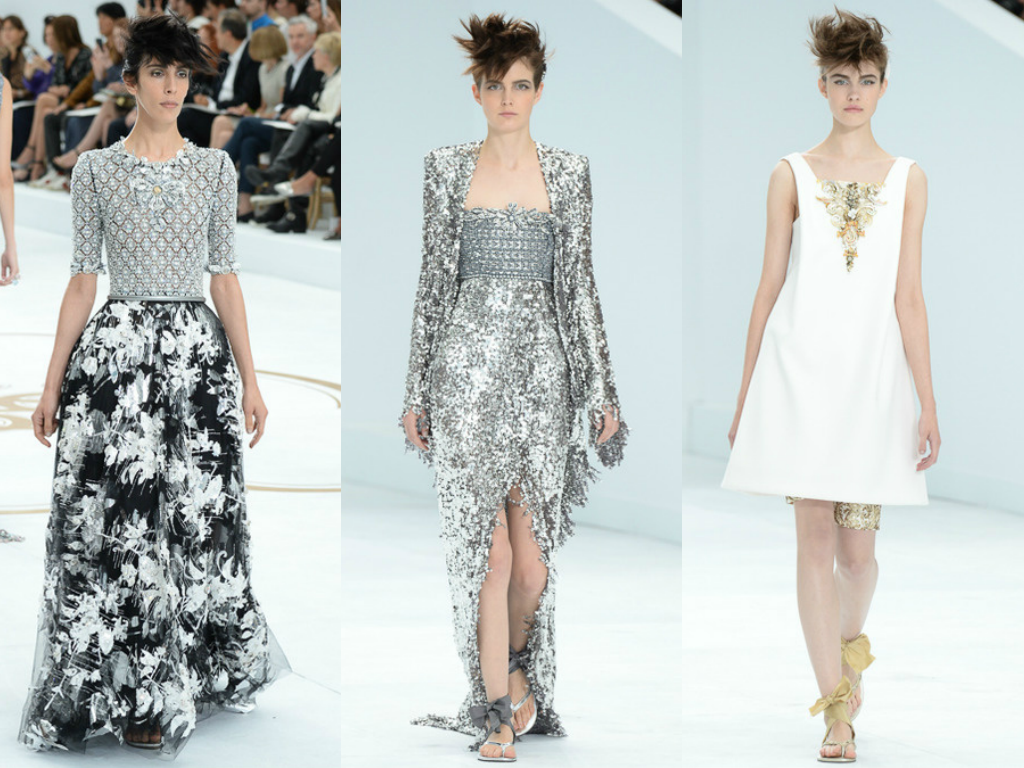 Haute Couture and Chanel are inextricably linked and it is my hope that the marriage remains for generations to come as Karl is one of the rarefied few who understands the genesis and the purpose of this hallowed seasonal ritual. He may be the grandpa of them all but he is head and shoulders and decades younger in his output and mindset. He doesn’t have to spout a word about what he does as his clothes announce his intentions more than some esoteric arcane crap that spills from the mouths of the untalented as a way of explaining and justifying ugly clothes. 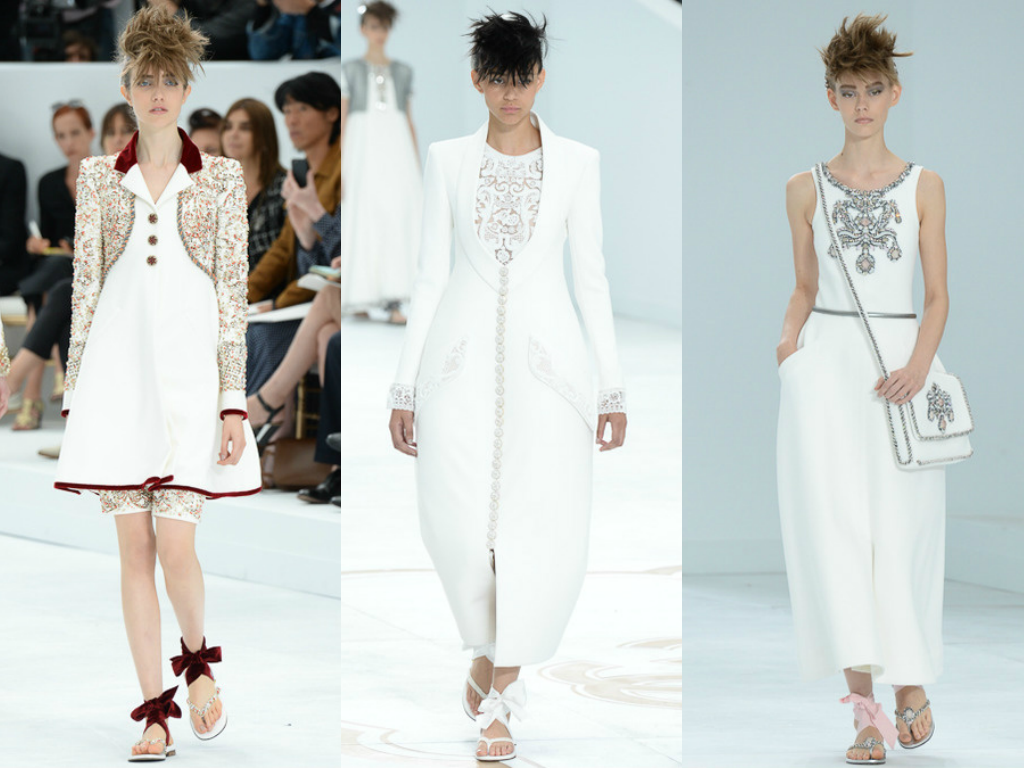 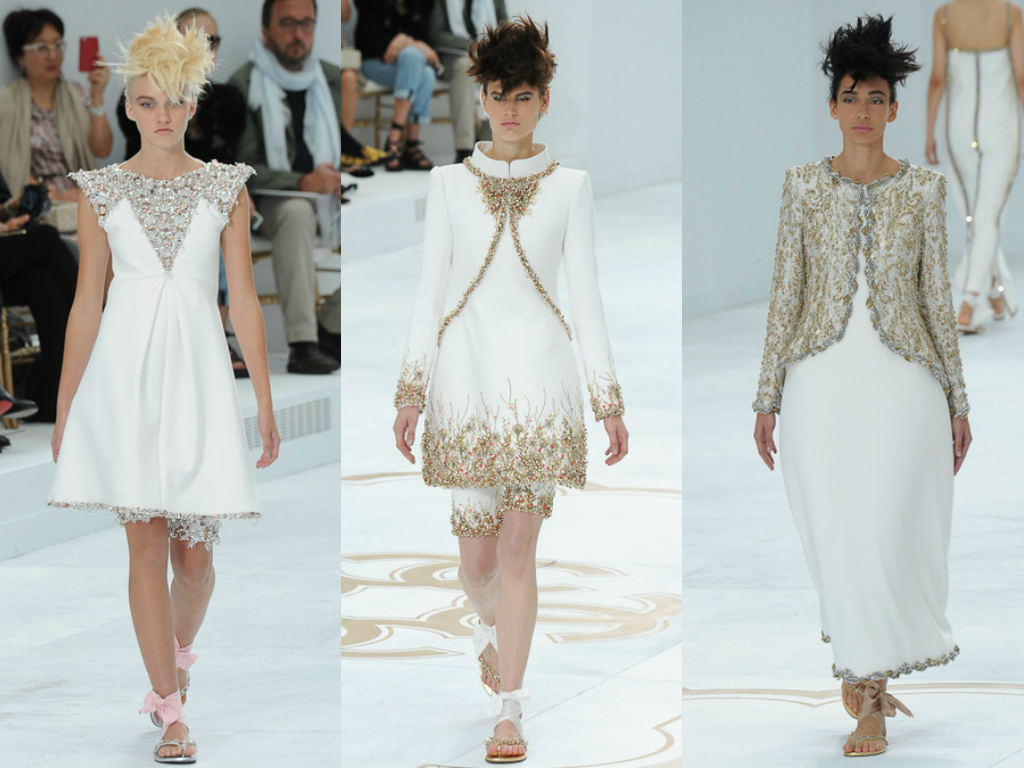 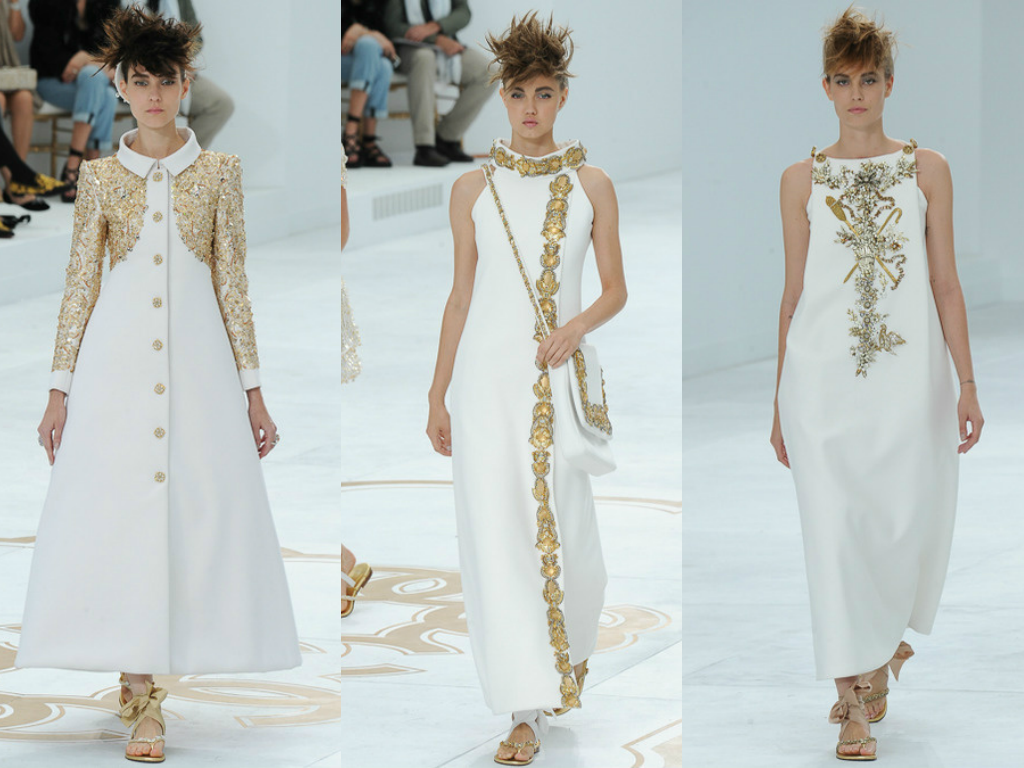 Sorry, but there is no real point to examine the collection other than to say this is an object lesson that should be studied by  those less fortunate who are near bankruptcy in their design accounts. It is spectacle. It is fashion. It is what haute couture is all about. It needs no explanation and it is all pure 100% Chanel and Karl Lagerfeld. 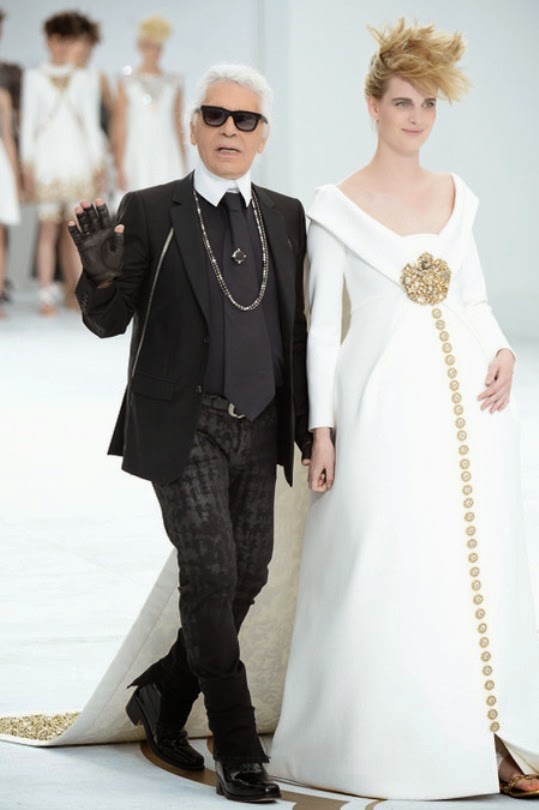 And that concludes my sermon for today! let us pray!
Posted by FASHION BY THE RULES at 7:39 AM