We have seen so many collections that can be considered “me too”  and “ so what”  that the mind boggles, let alone allows all of that “stuff” to just mentally blend together into one big bore. We have even seen designers who have offered their collections in all black  .…  2 of the 3 that come to  mind did it with great success and élan while one should never have been placed within this arena. The Wanger is not in the same caliber or class as Thom Browne or Gareth Pugh no matter what someone might think. The latter 2 are masters of their craft who outshine an ever growing fashion community that fosters ordinary talents rather than extraordinary talents. 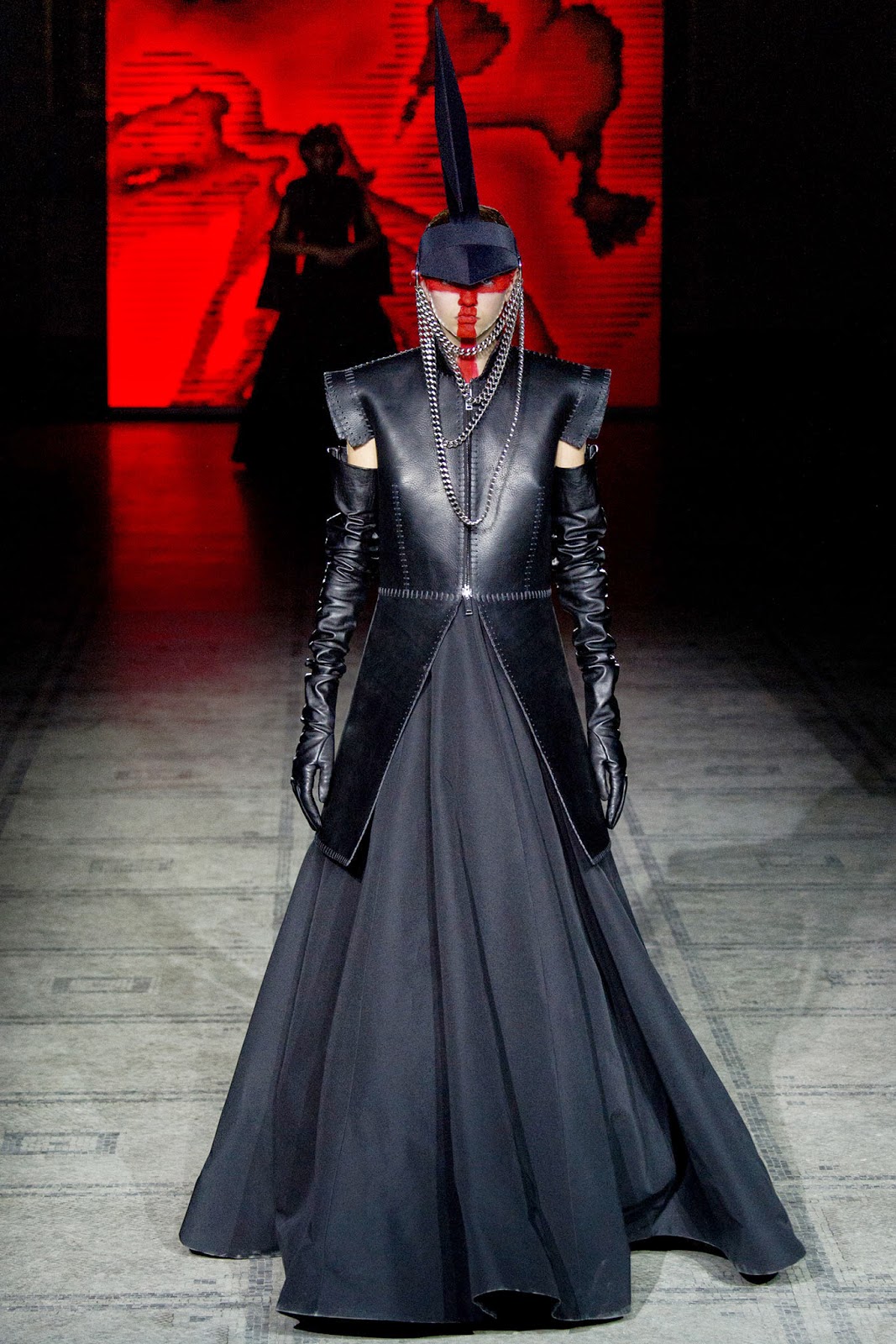 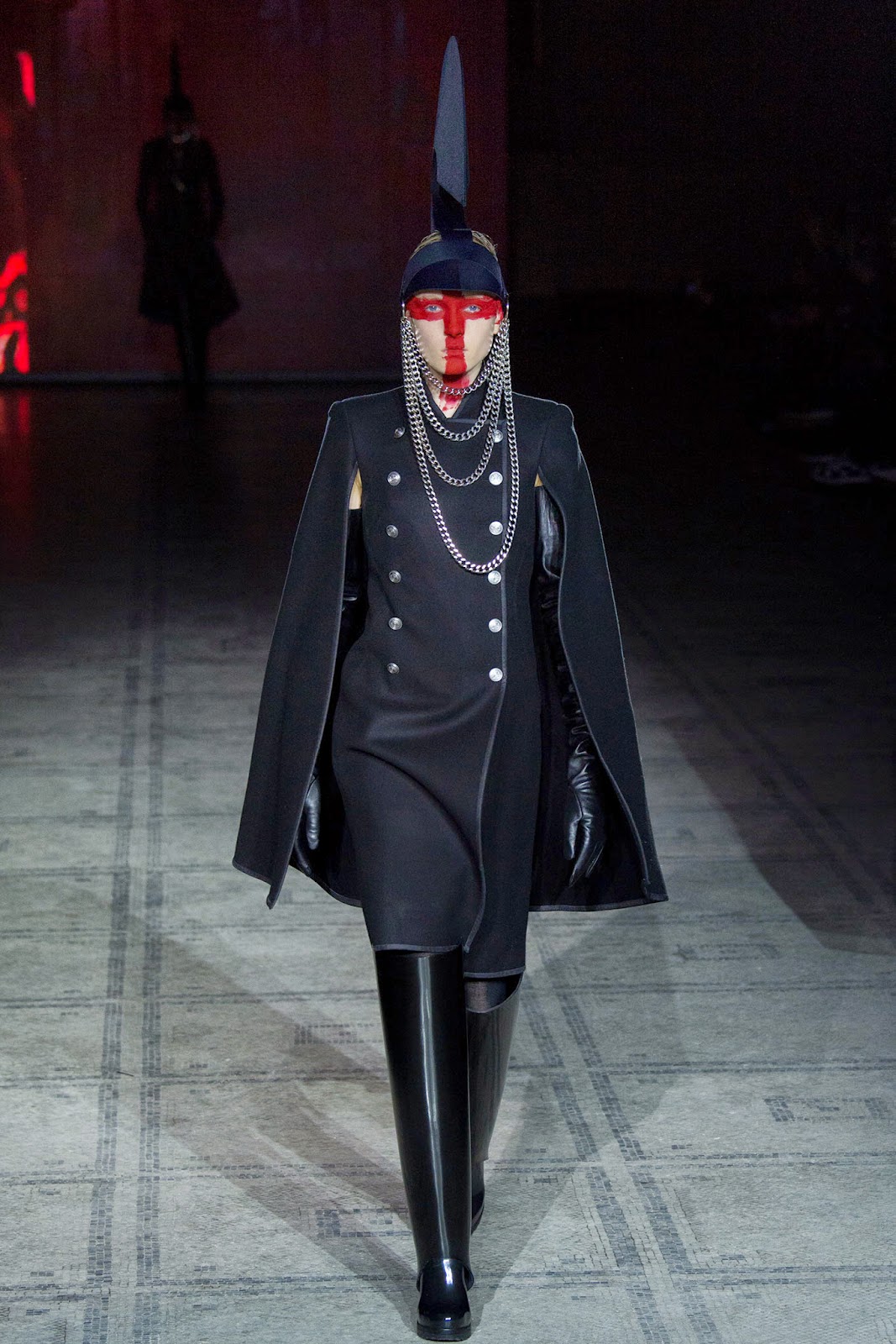 Jumping off my soapbox here, the reason for this review is to examine Gareth Pugh and his collection for Fall 2015. Years ago when he presented his first collection, this young designer made an indelible impression in my overcrowded fashion centric mind. The reason for this was that it was clear this was a young man who actually designed. He was unfettered by any commercial aspects of fashion and he wasn’t interested in some absurd trend. You might be thinking “who is writing this?” as my wont is to discuss salability in so many of my reviews but here was a case where talent superseded any of those aspects. 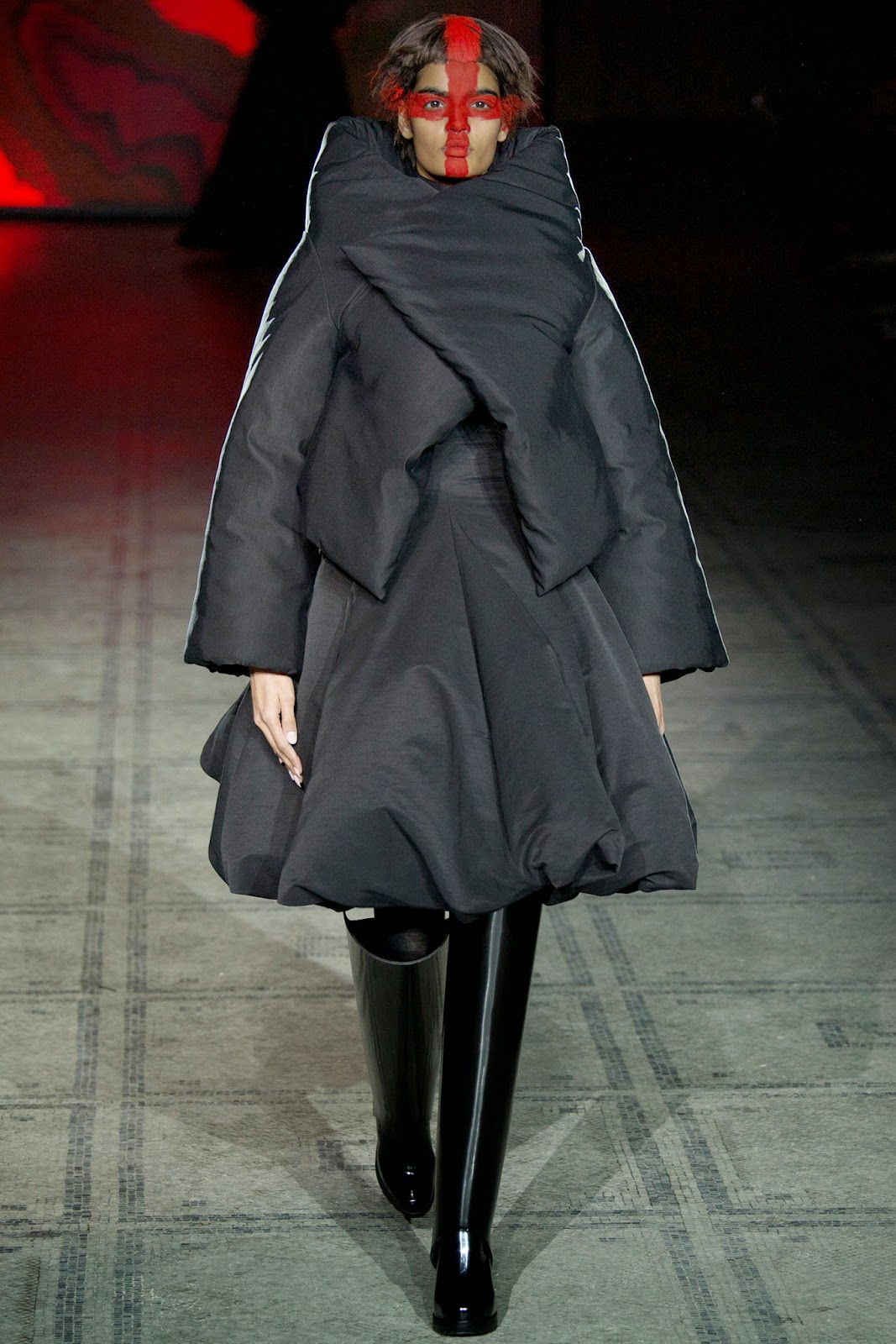 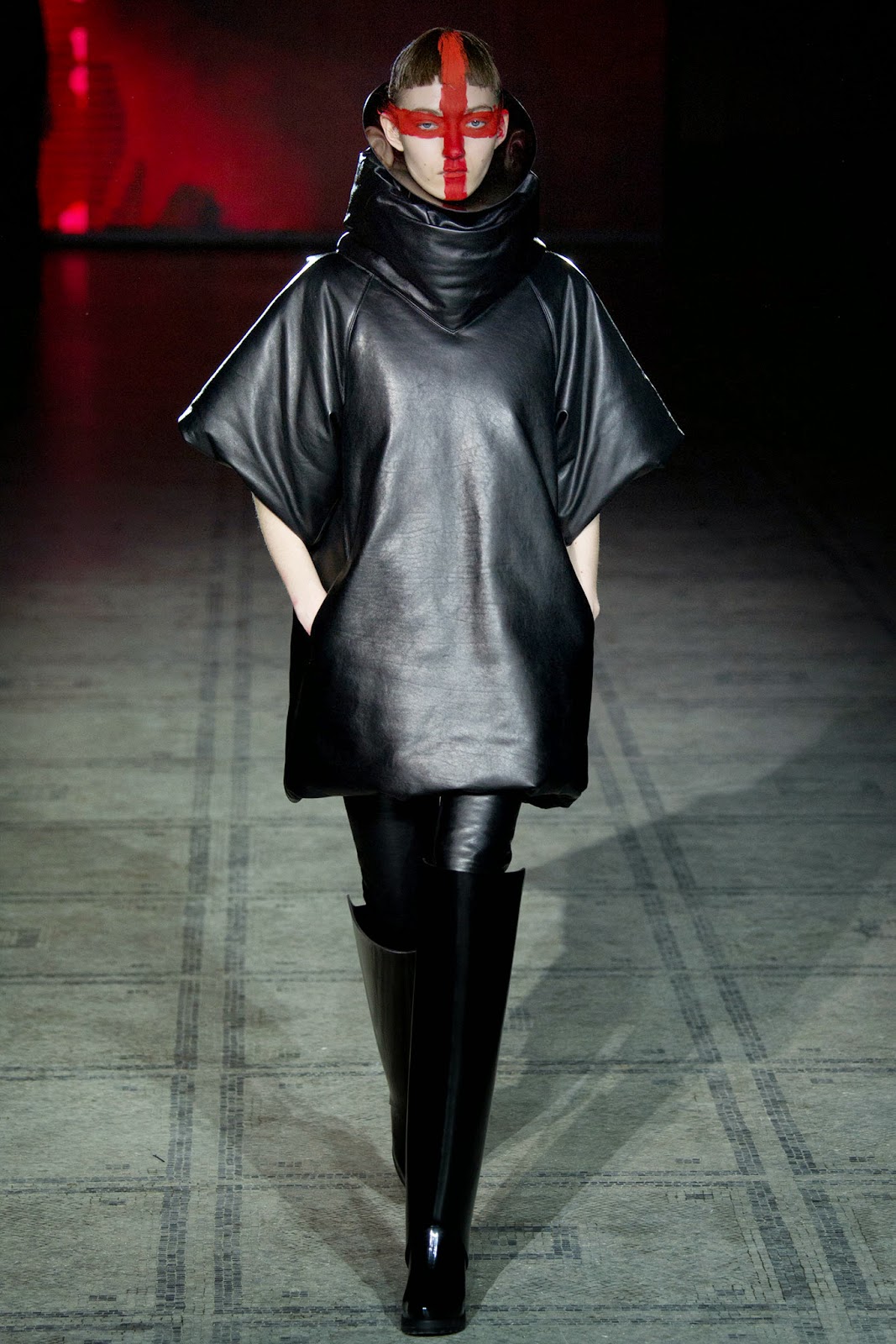 In the evolution of Gareth Pugh we see he has indeed thought of selling these clothes and not just to rarefied clientele of those like Daphne Guinness and Michelle Harper. Don’t get me wrong, these are not clothes for Mrs. Stepford of Long Island or for the bar mitzvah mother from the North Shore. These clothes are those which remind us that fashion could and is considered an art. The collection is brooding, austere, stark, architectural, dramatic, and head and shoulder above what we have seen to date. Within the collection, in mind, there were references to Comme des Garcons, Rick Owens, McQueen, and even Balmain... yes…  Balmain! Look again!! In the end these are clothes for those who seriously collect fashion or have the means and the eye to stand out from the flock. 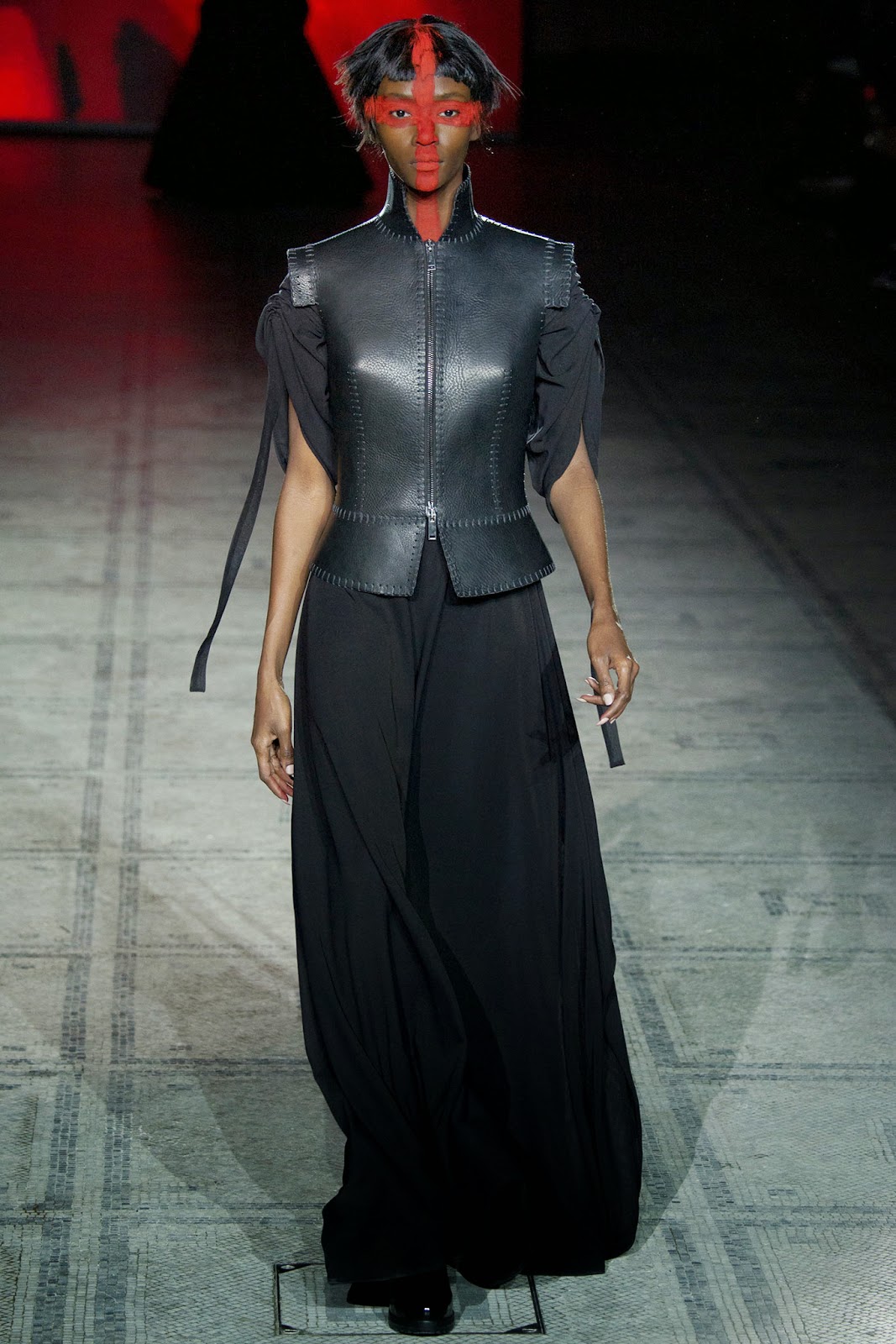 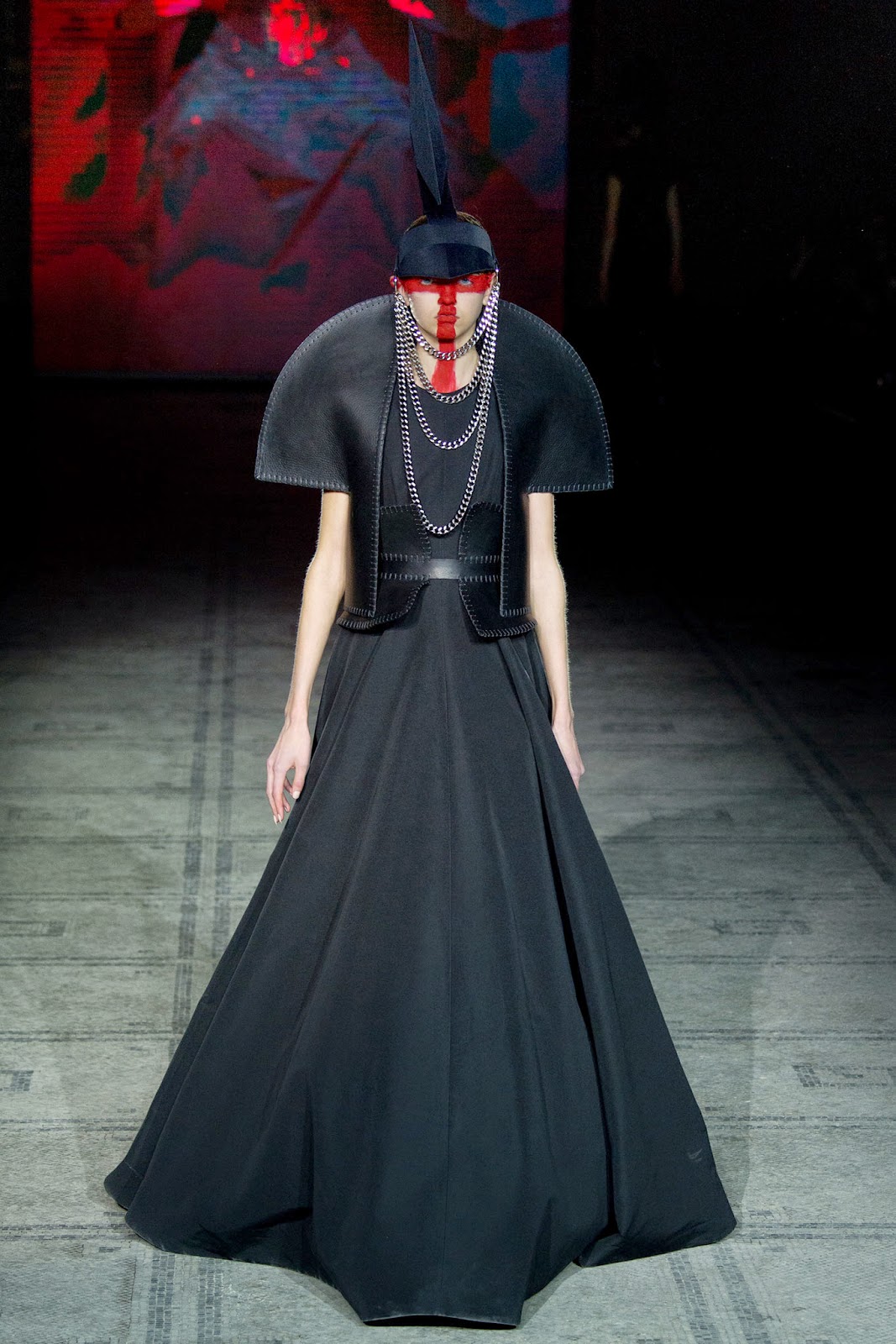 Having just completed a book about Charles James, it became apparent to me that Pugh, like McQueen, utilized techniques that Charles James had used which were taken from millinery design. The fabric molding which is a heat and cool process germane to hat blocking that achieves sculptural shapes is quite apparent multiple times within the collection. 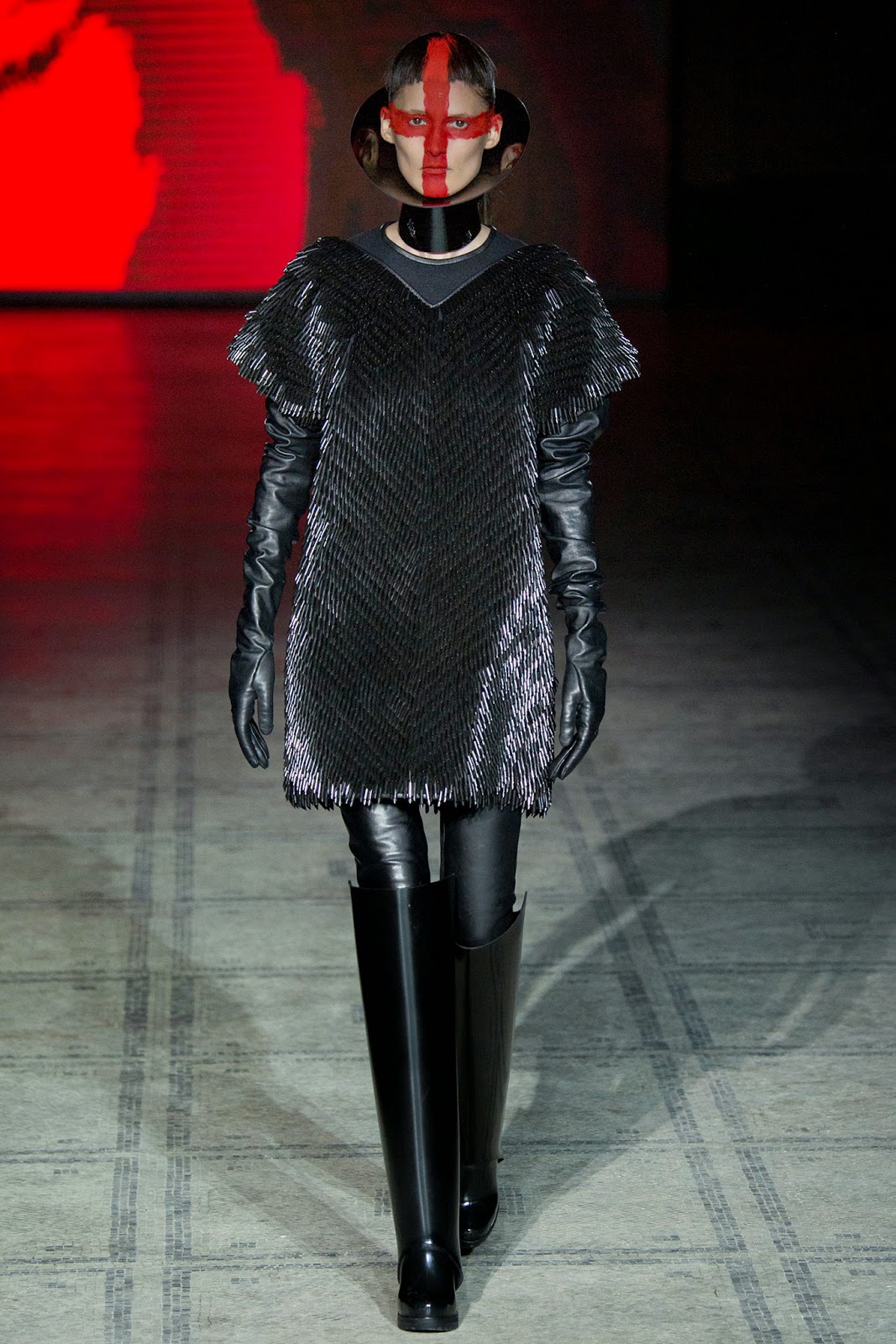 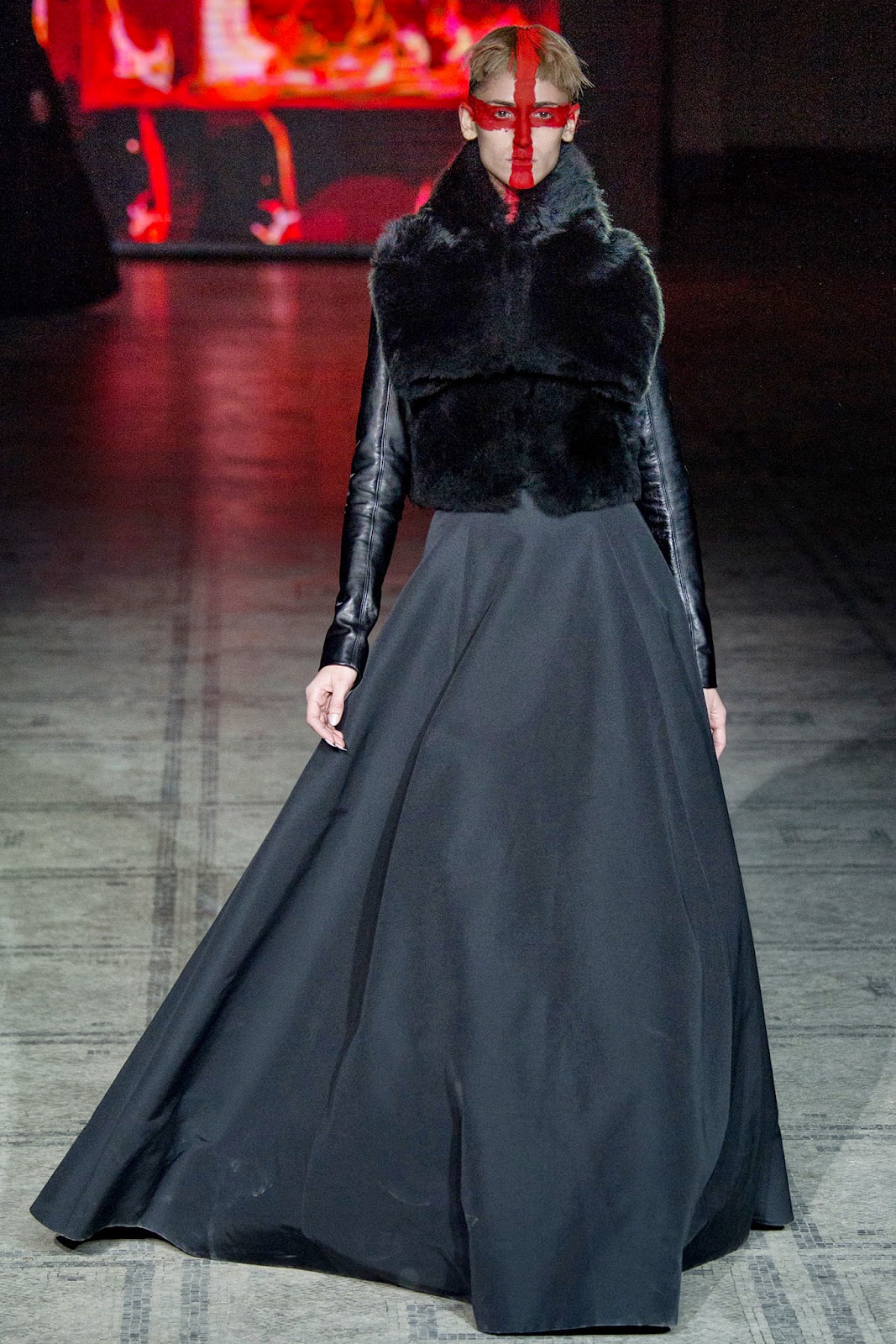 Watching a designer like this evolve is one of the great joys of fashion let alone a raison d’etre for my reviews and writing. He restores the faith in me that not everyone of this younger generation does the blah blah blah routine. Gareth Pugh has his inspirations and references but it is the clothes that speak the loudest and not the background verbiage justifying the output. 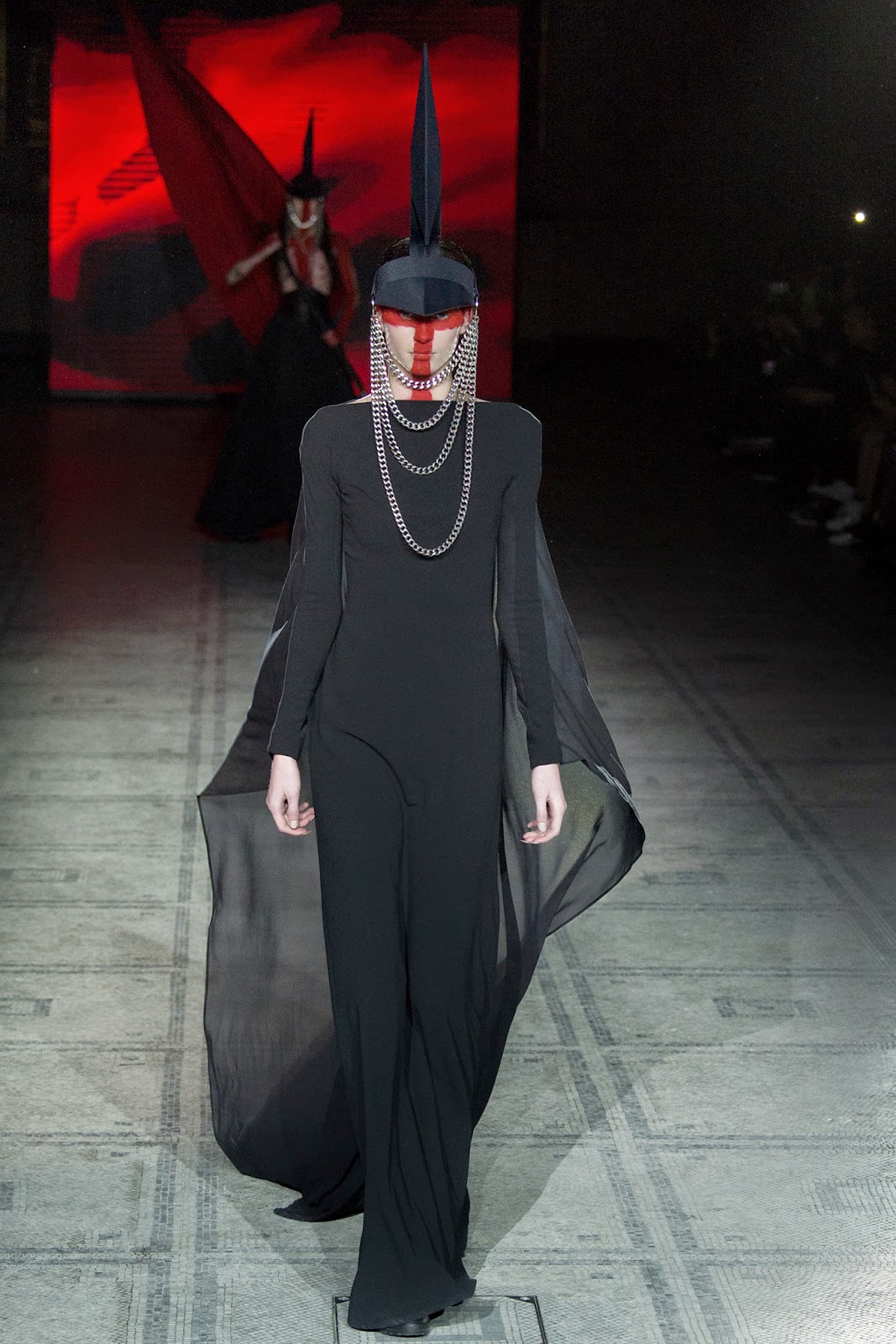 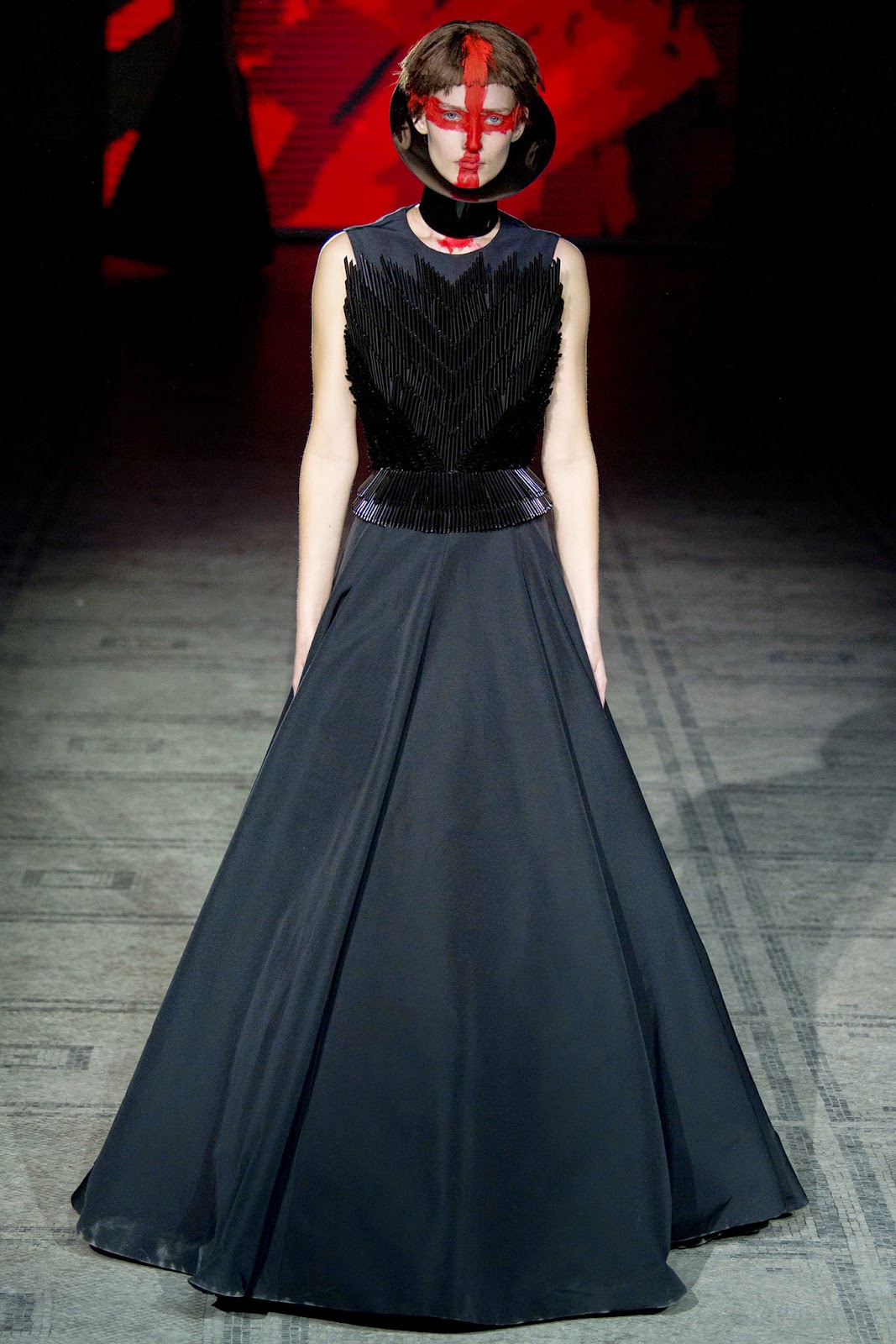 The visuals are astounding and filled with high impact and a level of  creativity and ability that is rarely seen on runways anywhere. The overall visuals are arresting, to say the least, but in the end, it is the clothes you focus on and once again, might I remind you this is a business of selling clothes not moods and blah blah blah.
Posted by FASHION BY THE RULES at 7:32 AM