Today we are going to speak with one of the perennials that I referenced a few weeks ago… one of those rare people who possess talents that allow themselves to reinvent themselves in new ways. Russ Hardin may not have even known he could or was in ownership of these talents that is paving a new path in his professional life.
As you will read, one might say he has been around the block a few times and yet, he found still one more milieu to utilize his well-known and self-aware skillset while discovering unknown talents to work on a new venture. Speaking from experience, I can say that there is a time in one’s life when you just have to gather yourself up and say fuck it… I can do this and then you just make it happen ... a company of one to start with and then who knows?
So, in his own words, you will hear/read how this perennial is back at it again even if things unexpectedly happened in this life;  if there is one thing I have learned is that simply said  “we make plans and god laughs!” but that doesn’t mean it’s the last laugh! Maybe there was a plan we weren’t even aware of for each of us….

Jeffrey Felner: Let’s talk about your career path... was this the plan? How did you arrive at your present position?


RUSS Hardin: Well…my current position is working for myself again. I Joined Bon Ton Stores in February of 2017 it proceeded to go bankrupt June 2018. I’d joined at the request of the CEO who I’d known for 20 years in order to “help” him keep it from going over the cliff, but the damage was done. Needless to say it was a terrible experience to watch so many long time employees basically lose everything. Over the last 10 years since I closed my own business in NYC in 2008 crash I’ve worked locally on individual projects and taken on long-term consultancies with companies like Kohl’s where I spent two years. It’s actually worked out due to my high tolerance for endless meetings and corporate/spread sheet side getting in the way of making creatively based business decisions. As far as my “career path” my only real plan was to get the Hell out of Milwaukee, Wisconsin and get to New York. My father had all his suits made and when I was 8 years old he started taking me to his tailor and letting me pick out the linings for his suit and sport jackets. To say he was tolerant when I’d choose brash stripes or multi-colored polka dots for his business attire was an understatement. I’d always been inexplicably drawn to fashion AS IS my wife as well. She worked for Yves St. Laurent in Paris, Valentino and Guy Laroche. I’ve been busy developing a collection of home décor, cards, scarves, pillows and other related products under the name of, “mr. hardin says…”. The name derived from what I overheard numerous managers say that to staff as to why they had to do something. So I’m having a lot of fun; initial shipments hit the stores just before Christmas. I can’t say it’s the best timing for a new line—but I wanted to get a quick read on whether it was going to work. I’ve always been a good salesman for my ideas with clients and employers so I am a one man band. 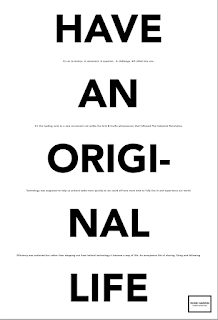 JF: Can you tell what was your most amazing experience in your career and what was the worst experience you encountered and why?


RH: I always tell people that my 5 years at Avon was the best and worst job I’d ever had because CEO Andrea Jung gave me seemingly impossible projects to handle (best). Aside from managing a team of 200 designers, art directors, writers, financial analysts, paper and print budgets ($150million), I opened a two floor Spa & Store on Fifth Avenue. Besides all that I was also building a corporate art collection based on beauty as seen through women’s eyes meaning the photographic works of Louise Dahl Wolfe, Shelia Metzner, Imogene Cunningham and 100s of others. The collection was displayed in the public areas of the company for all to see only to have it auctioned off 10 years later when Avon really hit the skids. Thanks to Andrea Jung it was five years of surprise, terror, invention, guts and stamina. I’d begun my career with Grace Mirabella at Vogue and had worked through the retail greats such Marshall Field’s, Lord & Taylor, Saks Fifth Avenue and The Hudson Bay Company. Each had their unique challenges and opportunities but Avon was the most overwhelming experience that I’d had to date. My wife once said to me when I came home sort of dumbfounded, speechless and bleary-eyed, “Well you’ve finally done it. You’ve landed the job that not even you can do!” But I did…. (Re-read the intro)
JF: If you could invite any 5 people to dinner, who would they be and why?
RH: Geez …dinner with five amazing people. Well, in no special order: Joni Mitchell; Picasso; Richard Nixon; Andy Warhol & Shakespeare. I can’t imagine the conversation but it certainly wouldn’t be boring. And if we could cajole Joni into singing a few, Picasso might paint a few dinner plates, Andy would be visibly bored as only he could be, Shakespeare certainly would recite a few sonnets and Richard Nixon could finally spill what was on the 18 minutes of missing tapes—I think it would be an evening well spent.
JF: Okay it’s time to speak about this new enterprise you’re working on so let’s have at it. Explain and expound on it.
RH: I’ve worked as a writer and artist throughout my entire career so this new line of product makes perfect sense to me. It’s based on a “mash-up” of Victorian etchings of which I’m certainly not the first creative to mess around with. These old etchings have been repeated and massaged in different ways for decades. All my designs own copyrights and are registered with the Library of Congress. My work usually combines from three to 10 different etchings assembled into a single new artwork. Specifically for the “angel” series, I’ve added unique painted backgrounds to them in order to fend off their inherent “quaint” factor as I want them to feel new and contemporary. So far, I have greeting cards, giftwrap, tags, velvet pillows, scarves, porcelain dessert plates and trays in the assortment.
It’s a lot of fun and people, merchants and vendors have been incredibly enthusiastic. I’m doing a PA this January for one store and another in February. There’s also some discussion of wallpaper. One store wants to trick out an entire room with one of the designs and a good friend; the British author Jane Green has also expressed her interest to “do a room”. It’s all been very satisfying and a great deal of fun.

JF: What’s the advice you would give to fledgling designers and those wanting to go into the fashion business or any related profession and why? Pros and cons?

RH: I was recently having lunch with Philip Miller, former CEO of Saks Fifth Avenue and Neiman Marcus. We were discussing our time in the glory days of department stores and how lucky we were to be there when it was at that time. Phil encouraged me to do my own work and he believes the new line is extremely marketable and that I’m “onto something.” With regard to the fashion world in general it’s become so splintered, specialized and unremarkable. For a new designer to even try to get their ”goods” marketed it’s now an epic journey through investors, factoring agents and other obstacles.  Fashion has become just another business … a business that must make money immediately and cannot withstand any missteps. I think it’s a huge challenge to venture into fashion today unless it’s approached as strictly business. If you have grandiose ideas that it’s some magical place where profoundly talented people create extraordinary things... then you’ll be sorely disappointed as a rule; that ship has sailed. This evolution has occurred due to a confluence of changing consumer needs, living costs, lifestyle erosion and a general lack of style from both consumer and designer. Style is a delicate little creature that can be bruised and damaged so easily. When I moved to New York almost 40 years ago to work at Vogue you did walk the streets and marvel at both the architecture and the people. What was on the street was inventive, unexpected and above all else—stylish. Individuality was coveted and most everyone I knew was driven to make their mark that day by what they wore each day. So to answer your question I’d say, ‘go ahead’ and give fashion a try. There are lots of jobs in the related areas that support that business, But what remains of the “Breakfast at Tiffany’s” era is gone and been replaced by the pedestrian and classless Kardashians and their ilk.


I’m sure there are young creative minds at work right now thinking they’ll be the ones to break through and change everything.  It’s happened before. Let’s recall Dior’s “The New Look”, YSL’s “Le Smoking” and Marc Jacob’s groundbreaking “Grunge”. Creativity is after all—endless.
www.russhardin.com
Posted by FASHION BY THE RULES at 7:24 AM