Memo to Raf... Where on earth did you get the notion that women who can afford these clothes want to look like rump roasts in quilted dresses or that instead of using drapes Gone With the Wind style opted for granny’s old satin quilted coverlet? Maybe I need to ask if you have ever spoken to or listened to a woman while she was buying clothes. Didn’t you get the memo about platform shoes? It obviously keeps getting lost!! 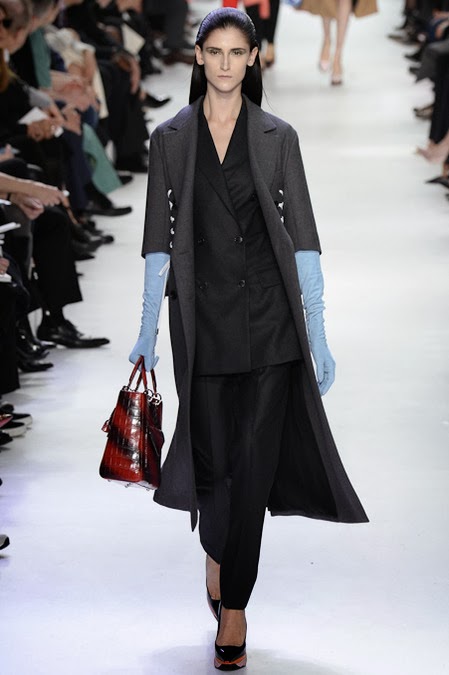 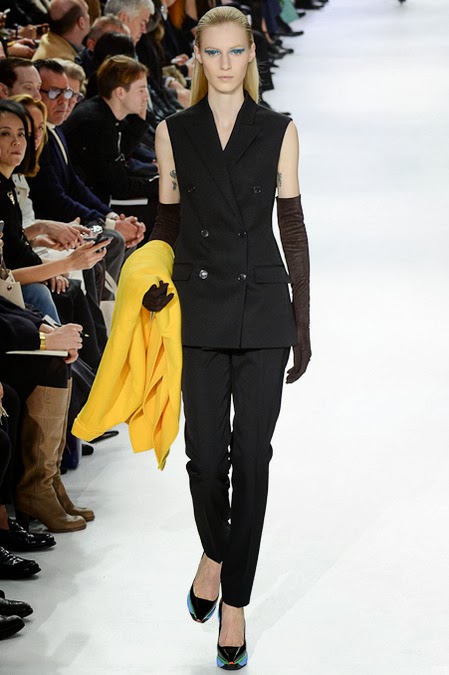 Let’s get to it now... Fall 2014 by Raf Simons for Christian Dior is one more misstep in his checkered tenure at the revered house. At the onset, my mind was racing with the fact that Simons had retreated to the tailored aspect of house by deeply delving into its famed jackets and departing from the floating panels and even decided to add wearable dresses. Harsh insets, transparencies and techno fabrics that served as some selfish egotistical moment to force his imprimatur on the house were suddenly gone. WRONG! He just decided to decimate others parts of the legacy of Dior. A sleeveless reefer or elongated blazer or petal ½ sleeved blazer is cool but this was over kill, the colors were welcomed and then suddenly you were looking at a collection that was both Spring and Fall. 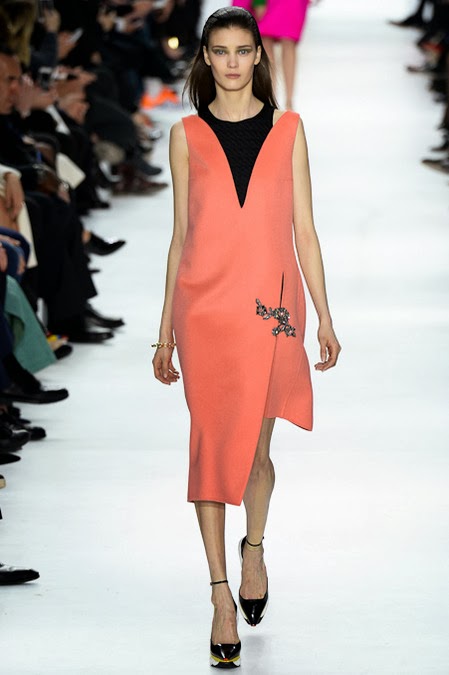 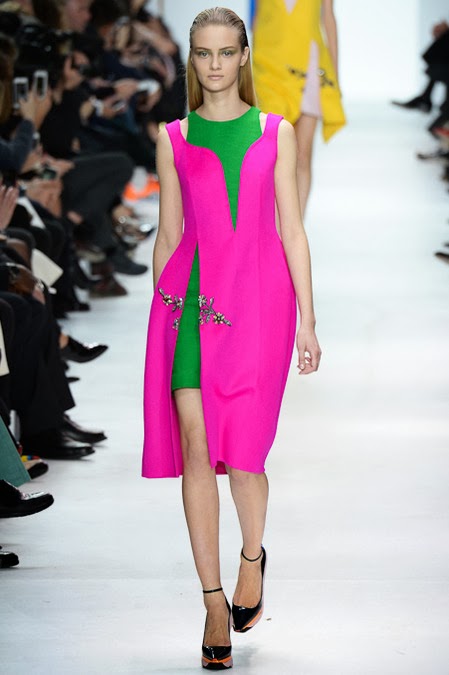 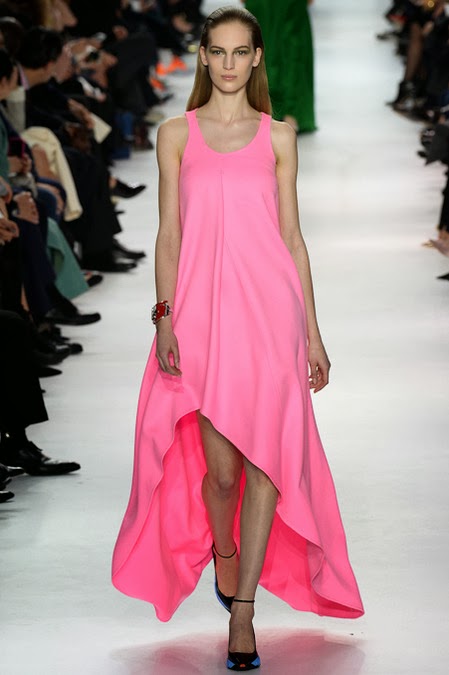 The inset lacing effect looks as cheap as free lunch or worse yet like some design school project and then there was the matter of those oddly places beaded flowers appliques to supposedly complement the sneaker lacing. Do ya think it might have worked better if instead of contrast lacing you used a monotone or that maybe the laces themselves resembled other than  if they were torn from a pair if Reeboks? 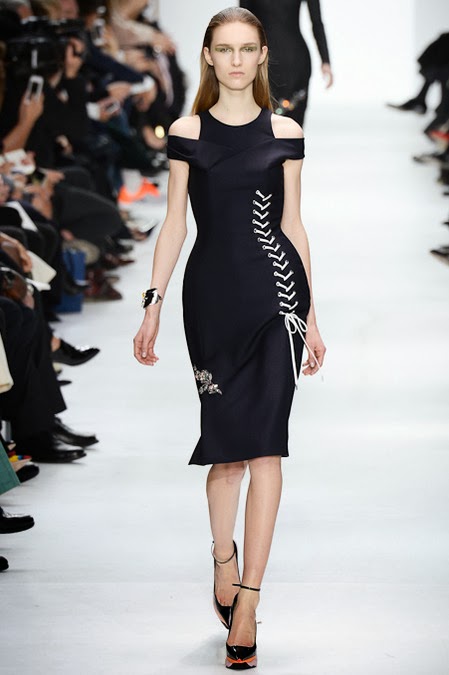 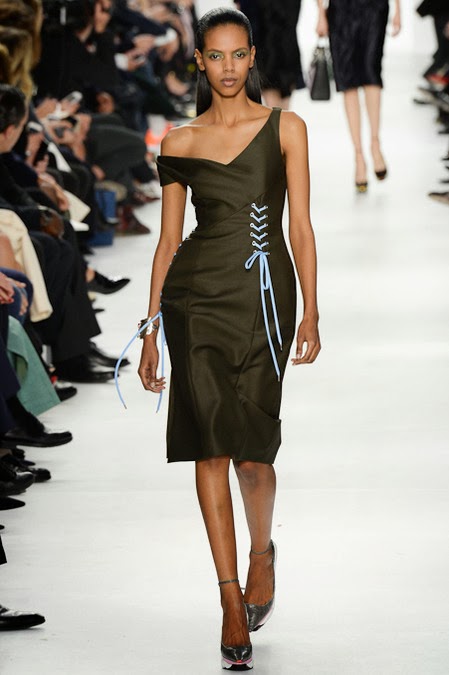 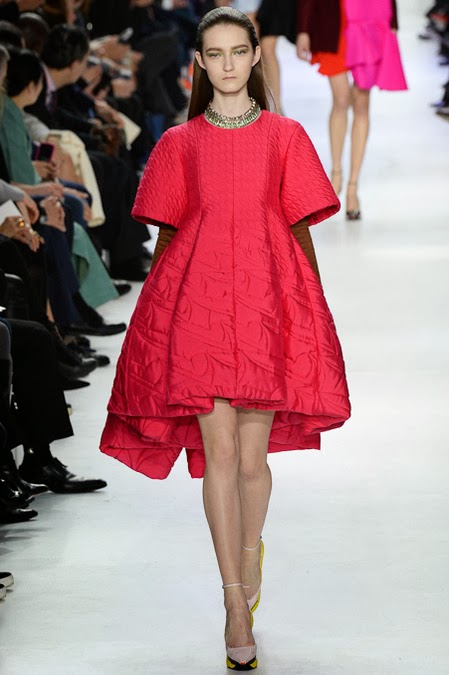 Moving right along there were all those quilted dresses which happen to have been quite lovely if you were looking for a fashionable way to stay warm this coming winter. I am sure there will be oodles of arcane high minded blah blah blah to supposedly justify these choices but … deaf ears here!!! continuing on this path now it the matter of the of the layered looking dresses which for a moment looked as if they might be quite fabulous but then again, Mr. Simons  seems to know how to turn these ideas against himself via various means of destruction. 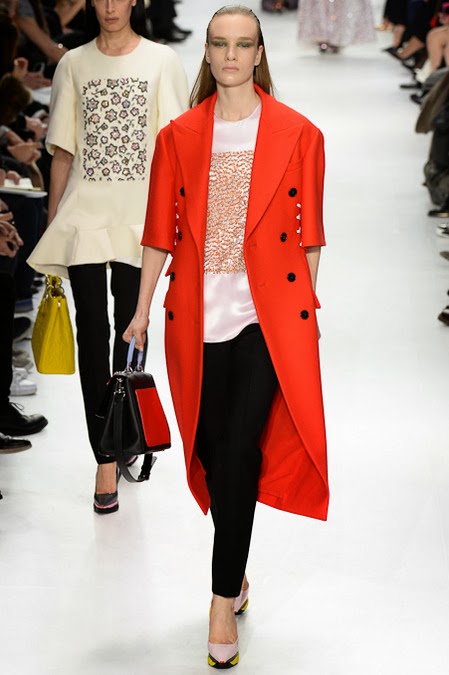 Bottom line is simple, from the outside looking in these are not clothes that befit the legacy or reputation of Dior. Rumor hath it that the clothes are retailing... I don’t believe it for a second as all that “news” can be manipulated by the mother ship. Passing by the store on 57th street has become a major source of sadness as there is neither glamor nor mystique about these clothes. They look as sad as Stella Tennant standing hunched and pigeon toed with dirty hair dressed in some ungodly creation! Remember aspiration??  It has turned into “WHO wants to look like that!” 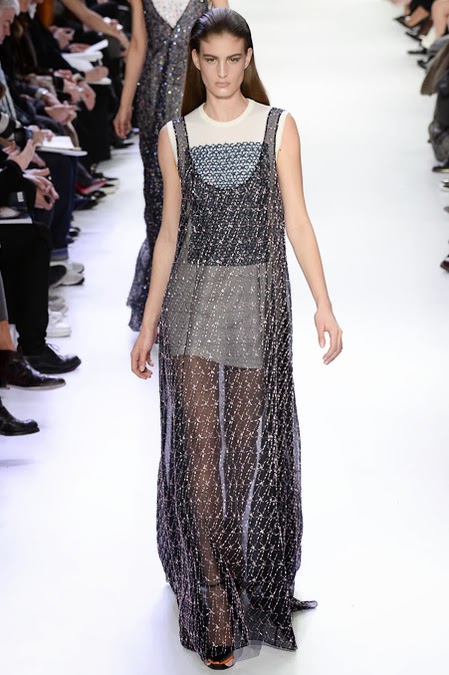 PS about those postage stamp style embroideries slapped onto shells and those supposedly fabulous and glam “gowns” well .. nighties … think again..Raf’s riff on Dior needs a whole lotta work!!
Posted by FASHION BY THE RULES at 12:06 PM