A runway show in Brooklyn you say... Oh yes if you have the power, prowess and great big helping of HUBRIS provided by Alexander Wang and the Kering wallet. An so he is the first designer to force fashion groupies to haul their supposedly well-dressed asses over bridges and tunnels to Brooklyn to see a seasonal presentation of clothes … nothing groundbreaking .. Just more clothes. In this case a contemporary collection that renders you slack jawed because you just can’t believe anyone would spend this kind of money and parade out clothes such as these. 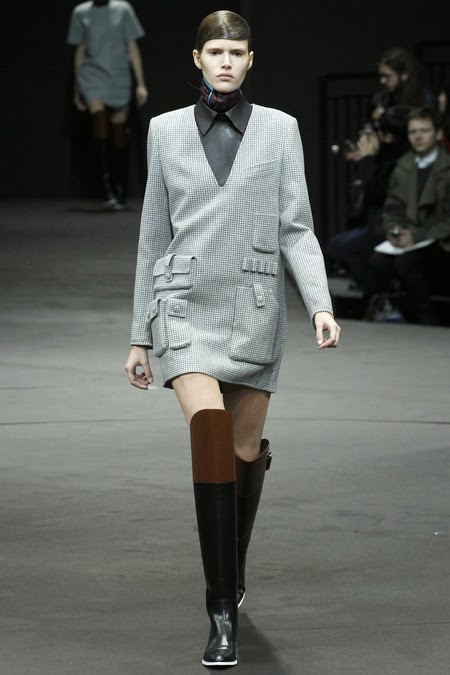 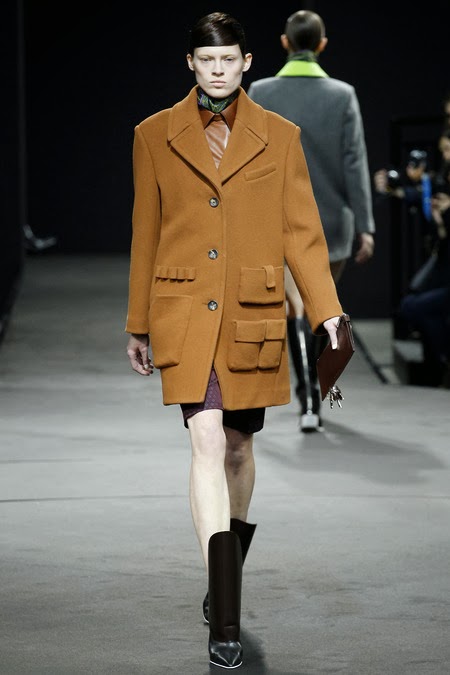 Before diving into to pool of negativity, let’s see if there is anything positive to be said. This isn’t easy but here goes... yes I actually liked the loose droopy cargo pant, the abbreviated astrakhan pieces, some of the knits were  pretty great and yes the finish of the clothes appears to be quite well done but of course there is the production which takes as much if not more of center stage than the clothes themselves. Okay done! 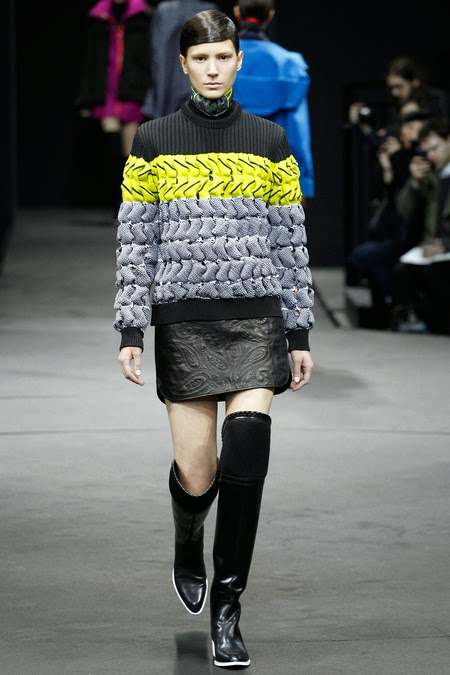 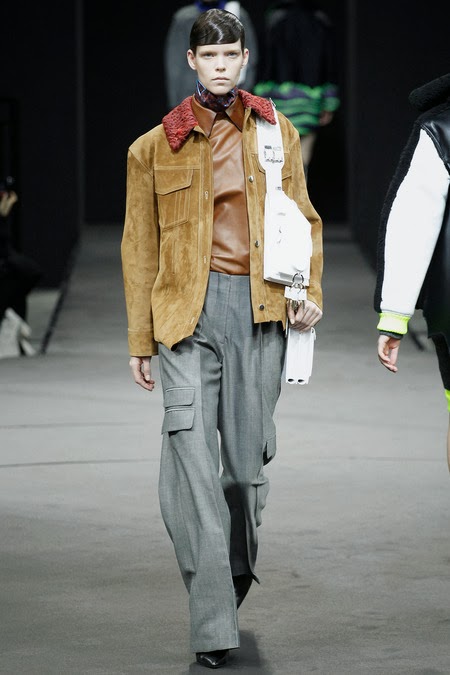 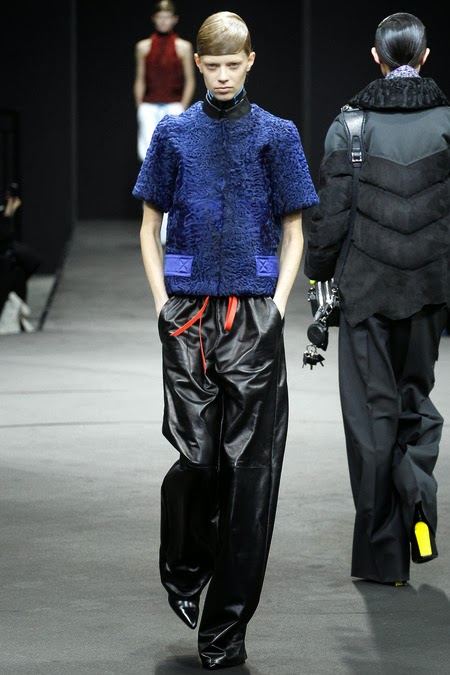 Now for the dirt! Who is encasing themselves in boxy dresses and full back ( as in football) proportioned coats...of course minus the under protective gear? Who wants those silly ass saddle bags and, other than just decoration, who needs the assortment of pockets that decorated pieces in the first segment. In case you were wondering one of them is actually for bullets, the ones you might be carrying for your AK47 the next time you go the Navy Yards at night!  The rest of those pockets are for you to carry all your electronic devices on your body ...sound like fun to me ..guaranteed to add 20 pounds to your weight! Here is a fact (one those with 20 minute resumes will not be aware of) fabrics that stand away like that were bonded in the old days of fashion and were looked upon as the low ebb of fashion. Yes, yes everything old is new again but hell that crap was like wearing a sauna suit. And what would an AW show be without shorts? 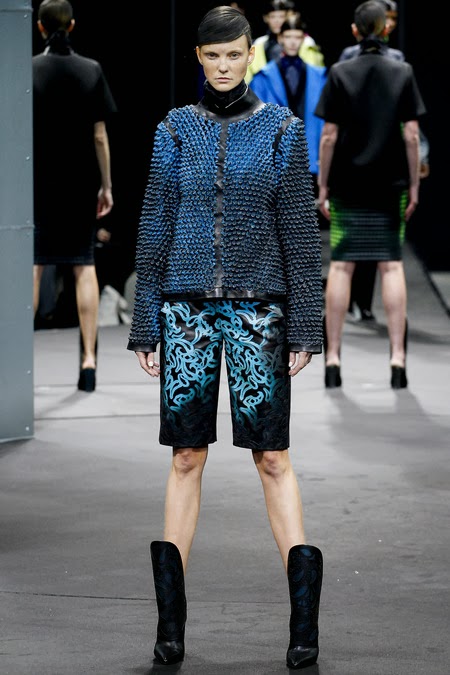 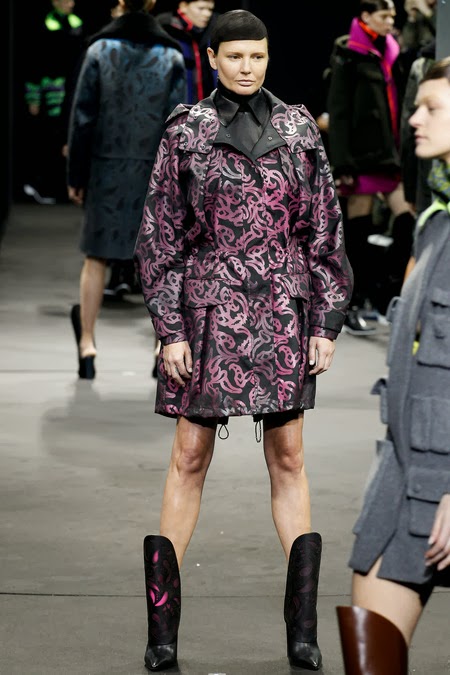 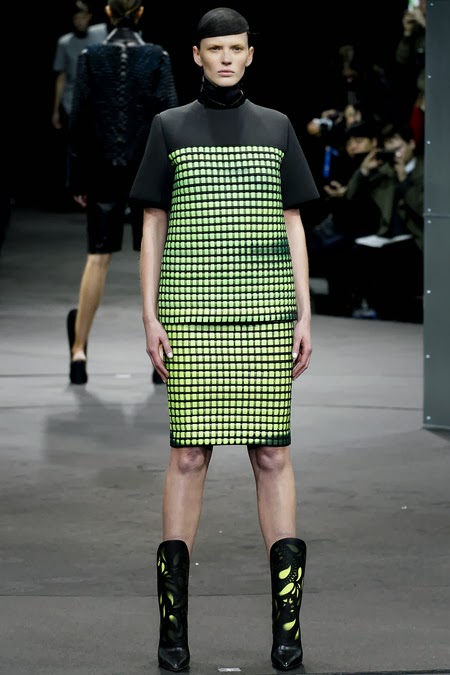 Always the techie of designers, there were numerous fabrications and fabric discoveries that tested the waters of the latest technology and the of course the shining example... pun intended... was the grouping of clothes that were heat sensitive and changed color according to the wearer and atmosphere... you know like wearing  a full length mood ring suit... keen huh?  Sort of  like a rich man’s day glow!
In all honesty it was a pile of “who cares clothes”, by a designer who has been built by hype and is otherwise rather forgettable in my opinion. As for that streaker, 50 of them might have been more entertaining than the 50 silly put togethers assembled for this audience of fawners rather than buyers.

PS …yes of course the boots which were okay and nothing more and the androgyny of the models who appeared even more robotic than normal with the over the top theatrical hair and makeup. Better run out and get in line for the first deliveries!
Posted by FASHION BY THE RULES at 8:08 AM