Lifetimes ago, the last show on the calendar of NYFW, when it was just called market week, was Geoffrey Beene. Always a hotly anticipated show as every season you were hypnotized and transfixed for 20 minutes by the genius that was pure Beene. In a less than perfect world, NYFW closes with the likes of Calvin Klein and Marc Jacobs. For the panderers and fawners, the Jacobs show is the equivalent of a Beene show and for us who might know better it is just one more show with not much gravitas. 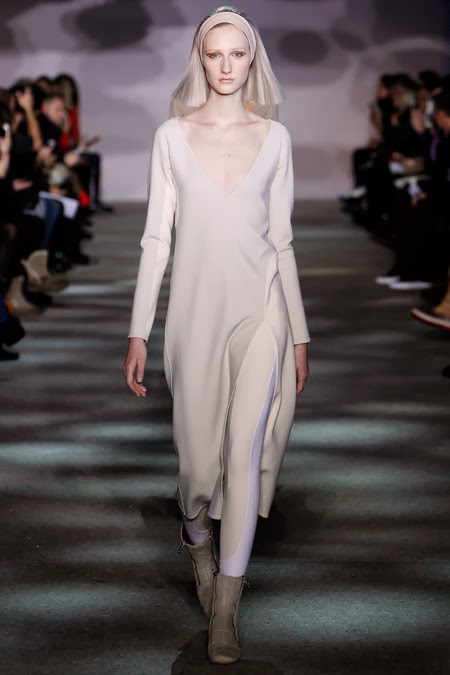 Marc Jacobs… his show last night was minus the auspices of LVMH which is to be believed the lead up to an IPO. Recently, Robert Duffy stated that Marc by Marc Jacobs was the sales driver for the brand and even that is hard to imagine other than its price point. This top tier division is to be the fashion or “couture” segment of the brand and every season we are treated to some fantasy of what Marc Jacobs is all about. Here’s the rub; every season it changes, every season we are shown less than esthetically pleasing clothes and every season we are shown unwearable unaffordable clothes for fashion victims. Every season we read praise and laudatory sentiments for this prince of fashion and every season you wonder just what collection they are reviewing because surely you saw a different one. Once again, all true, all present and accounted for, so to speak, except that last night the presentation was... well .. better than usual but not exactly what I call great or memorable. Yes the clothes look more wearable and yes the models were not styled to look like fictional characters but with the heavy nod to the 60s and given the “bareness and lightness” of the collection, this wasn’t exactly what I can call stellar in any way. Yes, the finish looked beautiful, I might even go so far as to say I liked the air brushed waves with organza ruffles and maybe even a few of the “color block” pieces but that’s about it … LIKE! I was not transported to euphoria, I was not mesmerized by this season’s selection of the Emperor’s New Clothes … I just liked a few pieces!! 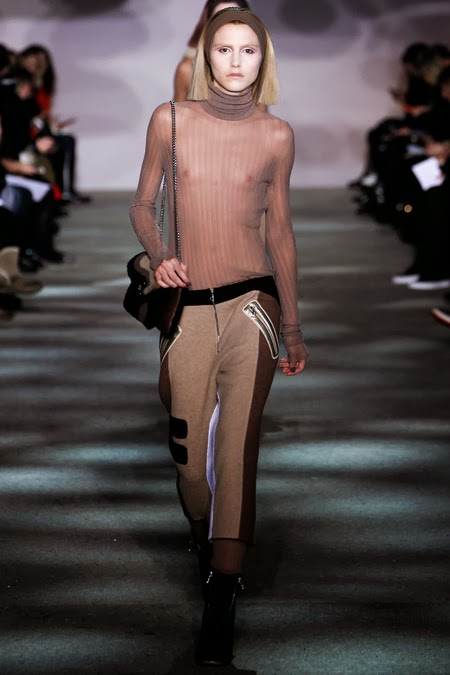 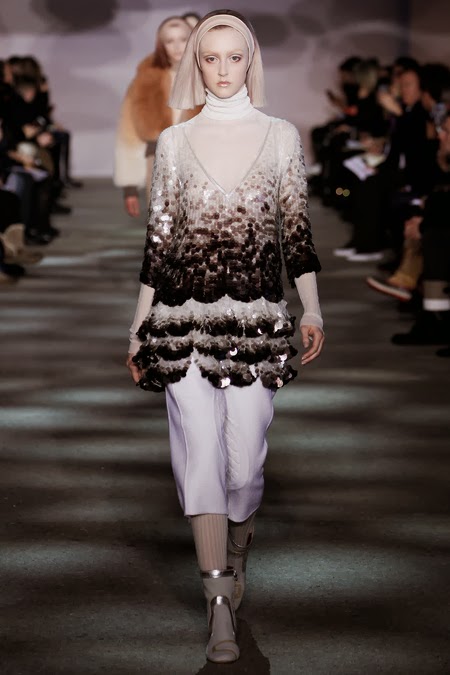 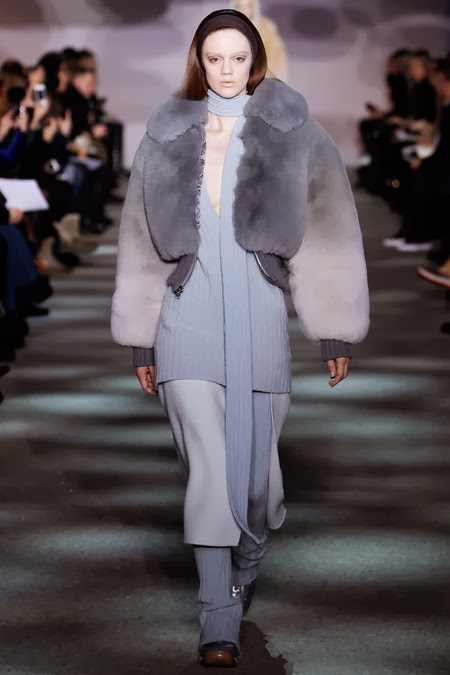 Calvin Klein … one really has to wonder what the namesake thinks of what has happened to his once modern, minimalist and even, dare I say … chic brand. Once upon a time Calvin was known as an American Armani or at least an off shoot of the Armani esthetic which was not an insult in any way, merely an observation where Armani was used as an adjective rather than a comparison.. a brevity of words if you will, and yesterday we witnessed still one more of the many incarnations that Mr. Costa passes off as his vision for the brand. Lately, frankly, it has been sort of horrifying and yesterday surely cemented that sentiment. What happened to the impeccably dressed Calvin Klein customer? This 21st century offering looks more like loving hands at home or some design school project dealing with the benefits of sustainable apparel or even worse as Miss Hannigan’s wardrobe. If you have no idea what I speak of, then you best have a look at the collection. It would appear to me that Mr. Costa has set his sights on that Chico/Eileen Fisher, possibly even the Prada lady and maybe even those who fancy artisanal clothes over well designed ones. There is little point of me ranting about this as all you need to do is look at it and read what I have said and hopefully all will coalesce. And by the way, the pundits find it just about as great as the second coming! 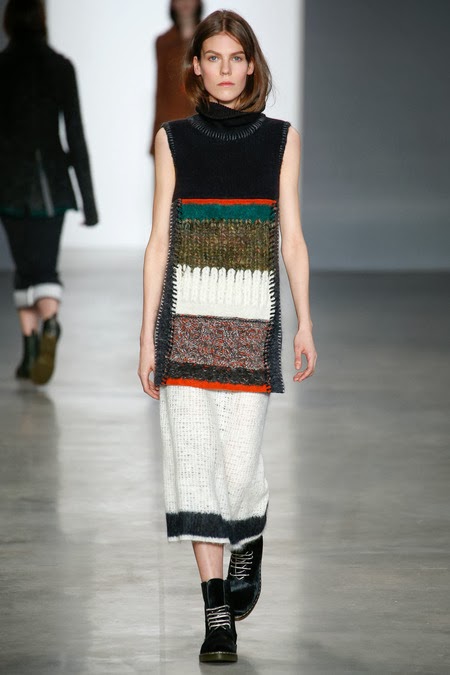 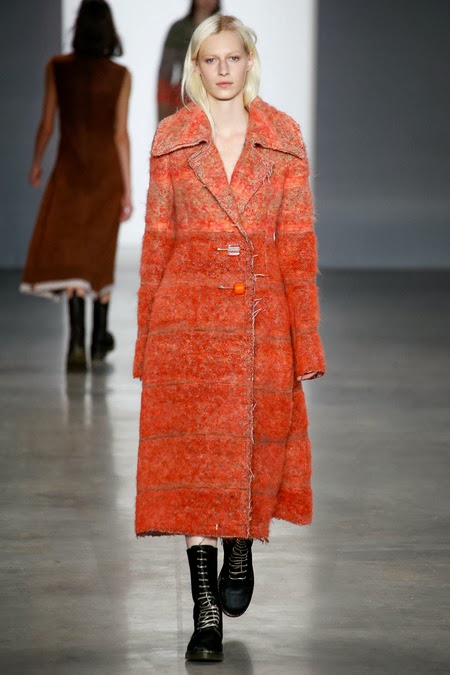 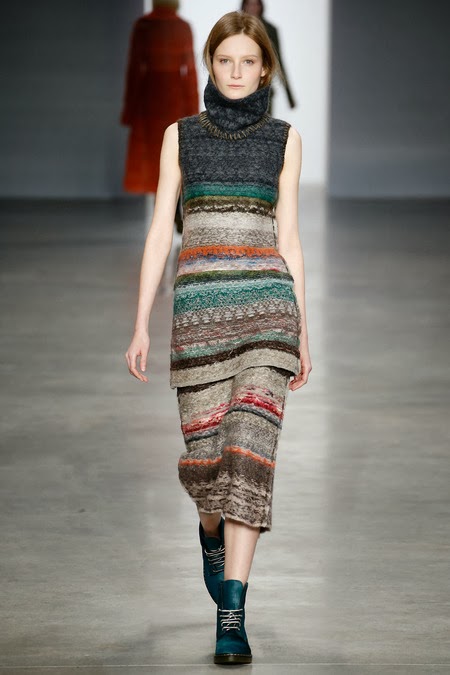 With all this having been said, it is my humble opinion that NYFW goes out with a thud rather than with a bang.

PS.. the more I think of it .. Fall 2014 at Calvin, well it looks like some old Marc Jacobs collection!
Posted by FASHION BY THE RULES at 8:34 AM