Here’s the thing about Ralph Rucci, you know before you see it that what you are about to see is what you won’t see anywhere else during the so called week of fashion we have here in New York. Mr. Rucci is the stand alone in this town as what he stands for is the closest thing to precise exacting fashion that you can find in any fashion capital. As has been stated by me many times, he is a designer, a craftsman and an original. Yes he is an acquired taste and no he is not the trend driven new kid on the block. He is consistently mind boggling in showing you the viewer that he can achieve the impossible with a mere “needle and thread!” 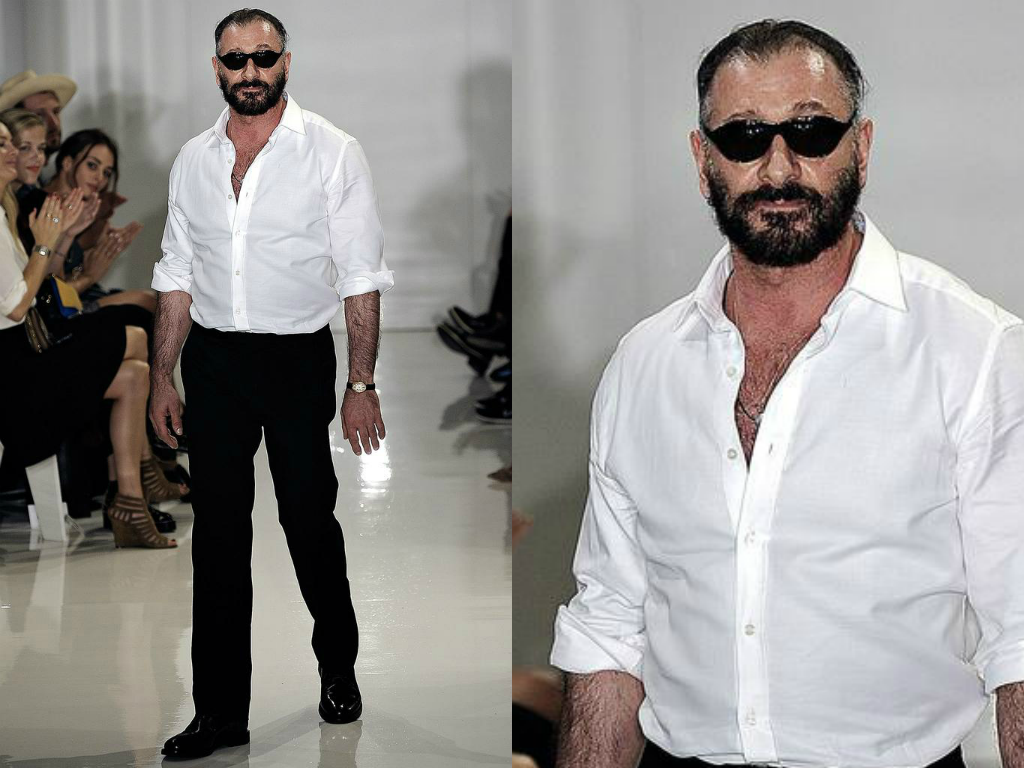 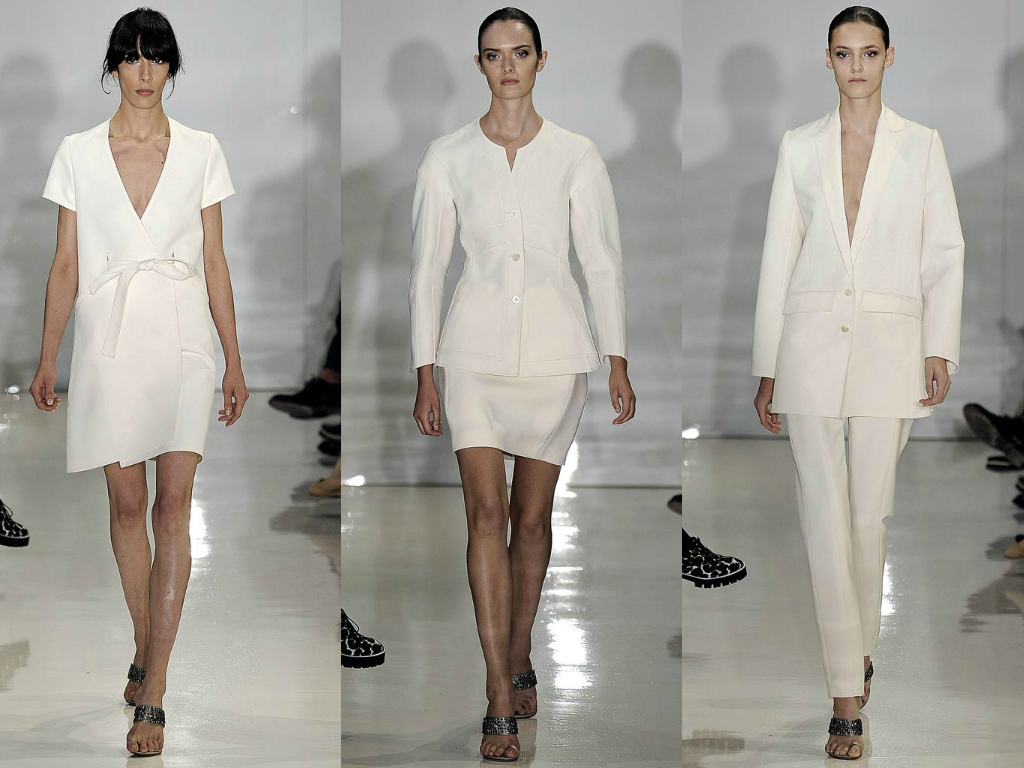 In his notes, yes he actually wrote them, he describes the opening exits as precise and sharp and here my eyes told me that sharp is an understatement as the shapes and silhouettes could cut glass. Some might say rigid but there was a certain softness to them even though at first glance you might think they could stand up and salute. Something about them, maybe the cream color, spoke to a slim chic woman of any age rather than a woman of a certain age. 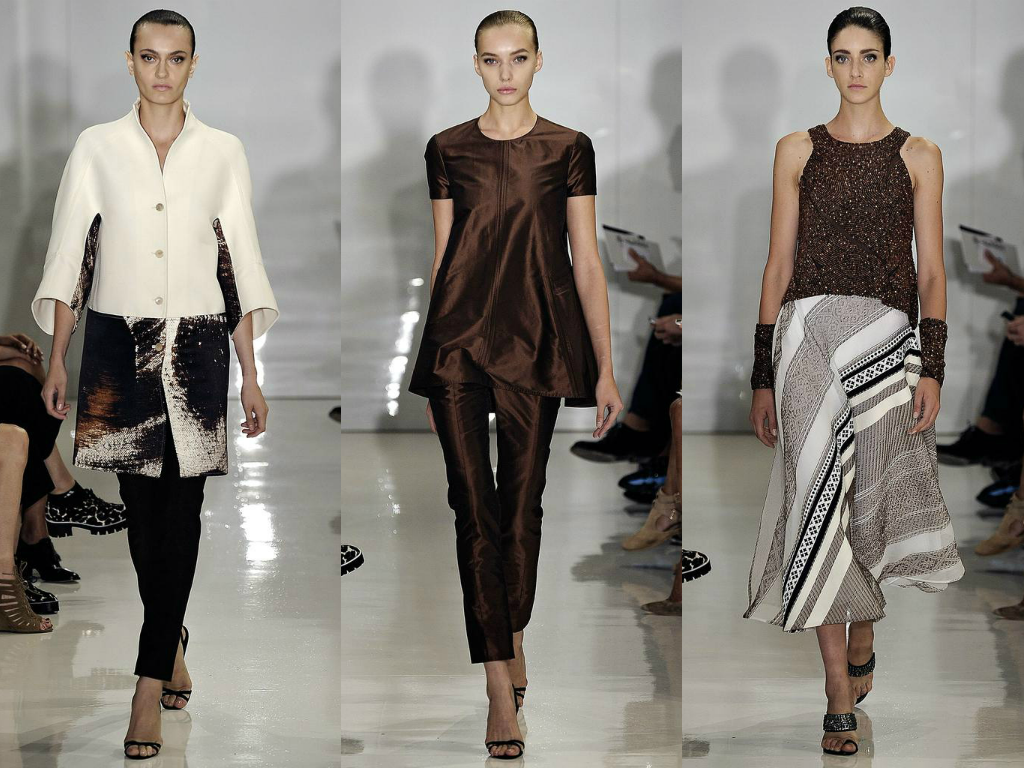 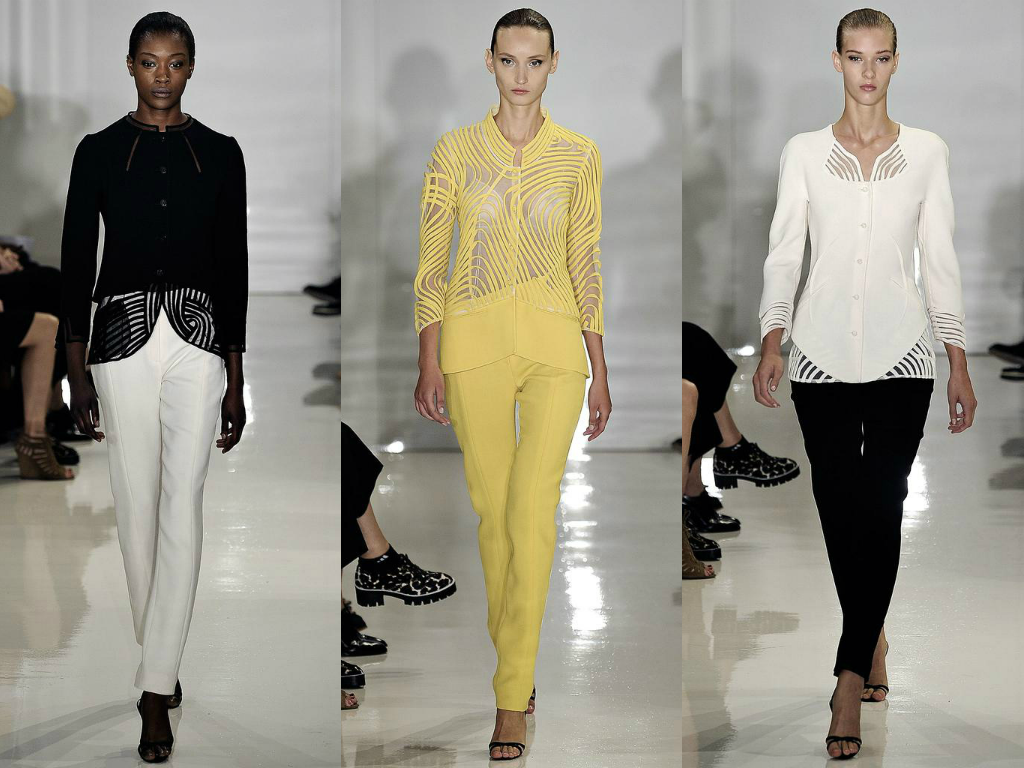 In past seasons and this one included, Rucci is relaxing a bit and showing some softer separates or rather pieces that go together and appear at lack of a better word… leisurely or relaxed maybe. The prime example is the print skirt with wood beaded shell and high waisted skirt with what seemed to be a waist tied shirt over a bra top. In keeping with this new, I hate the word younger, but yes that, there were exquisite suits and simple dresses and even a princess version of a trapeze ball gown and the RR version of a caftan. 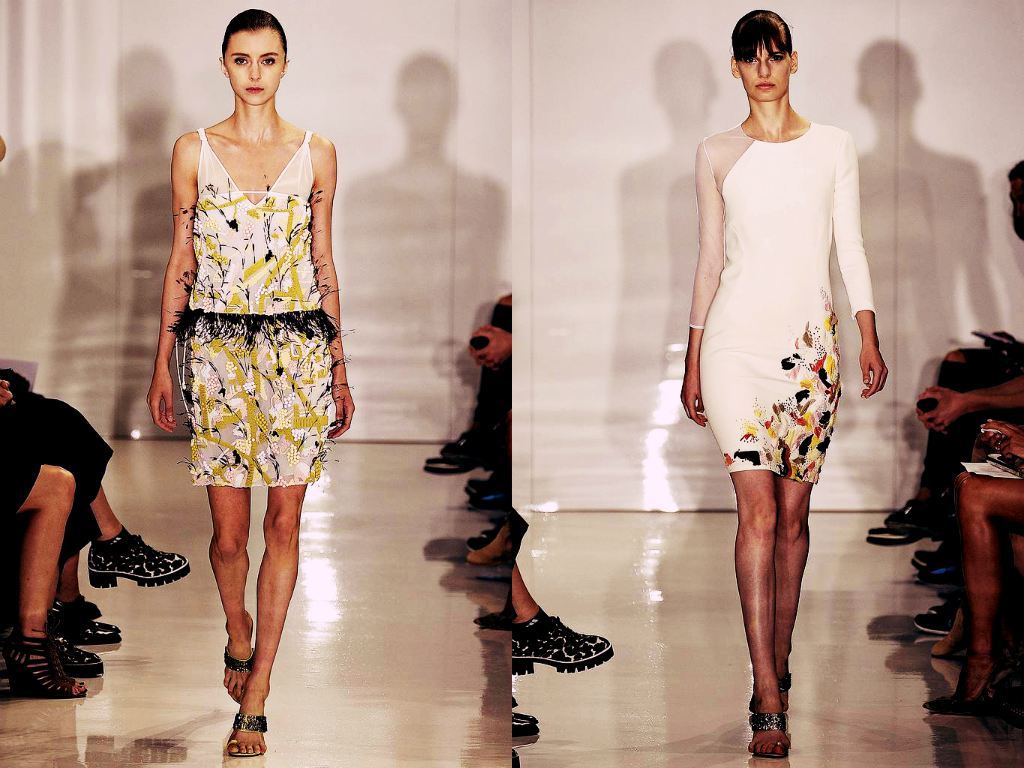 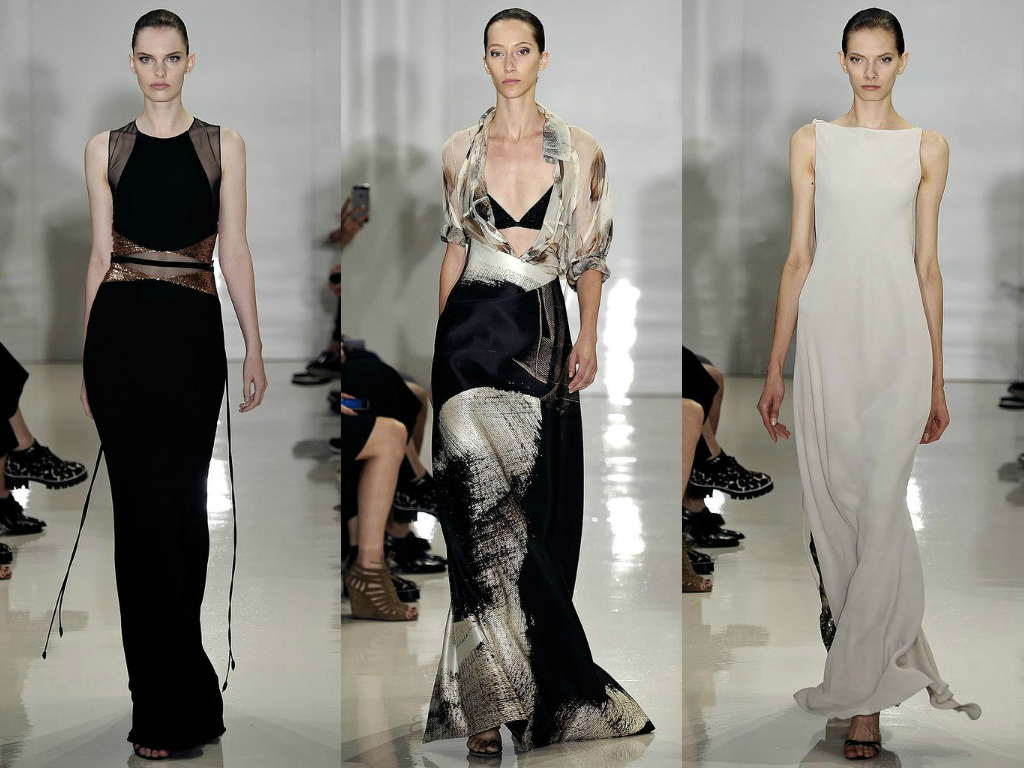 Major standouts were his couture touches he calls “vibrations” which was used in a set of exits which highlighted the technique in layered dresses, jackets and suits. Then there was his Venetian pin tucking of tulle which gave us a peek of skin in a very tasteful and strategic way. There were a couple of short beaded pieces which were almost an anomaly to the collection yet one understood that without  a bit of a shock or seemingly poor fit in terms of look, there can be no evolution. The  short dresses happen to be beaded and appeared in sort of Easter eggs colors; one all over beaded and embroidered and one mechanically placed off to one side. What cannot be forgotten was a Mondrianesque turnout matched in the most accurate and precise way and the “they won’t forget you as you leave” gown that exposed liquid silver under layer as you walked away. 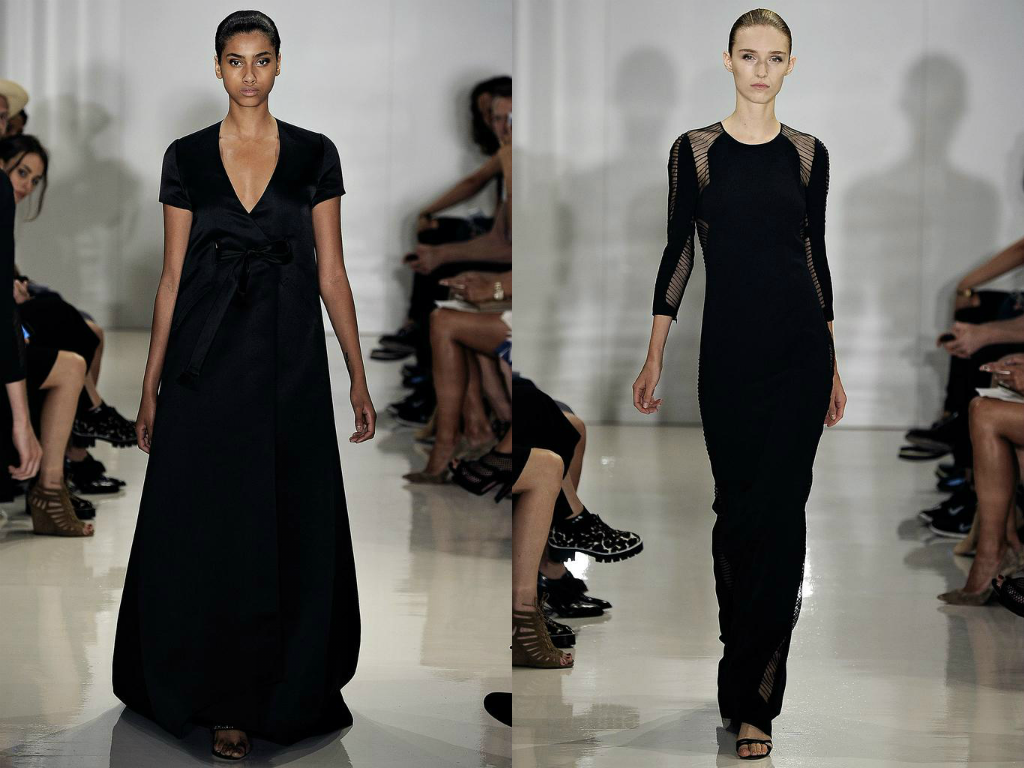 The slide show will hopefully make all the verbiage coagulate but no matter as what you need to know is that Ralph Rucci is a visual treat to the knowledgeable, savvy and observant. His fashion “entertainment” is to astound those who recognize it for what it is… mastery! And oh yes.. he is a designer who designs!

PS… one would be remiss if the trapeze tunics were not mentioned and that he managed to turn a shirtwaist dress into a chic affair!
Posted by FASHION BY THE RULES at 8:26 AM