Giorgio Armani is no longer a revolutionary designer but he is one of the few evolutionary ones that continues his reign far longer than most. Mr. Armani may be a yawn to some and possibly even yesterday’s news to others but this is a man in control of a billion dollar empire that answers to no one and takes no prisoners. He is beyond trend and possibly it is because he follows his own lead and stands behind all of what he does. 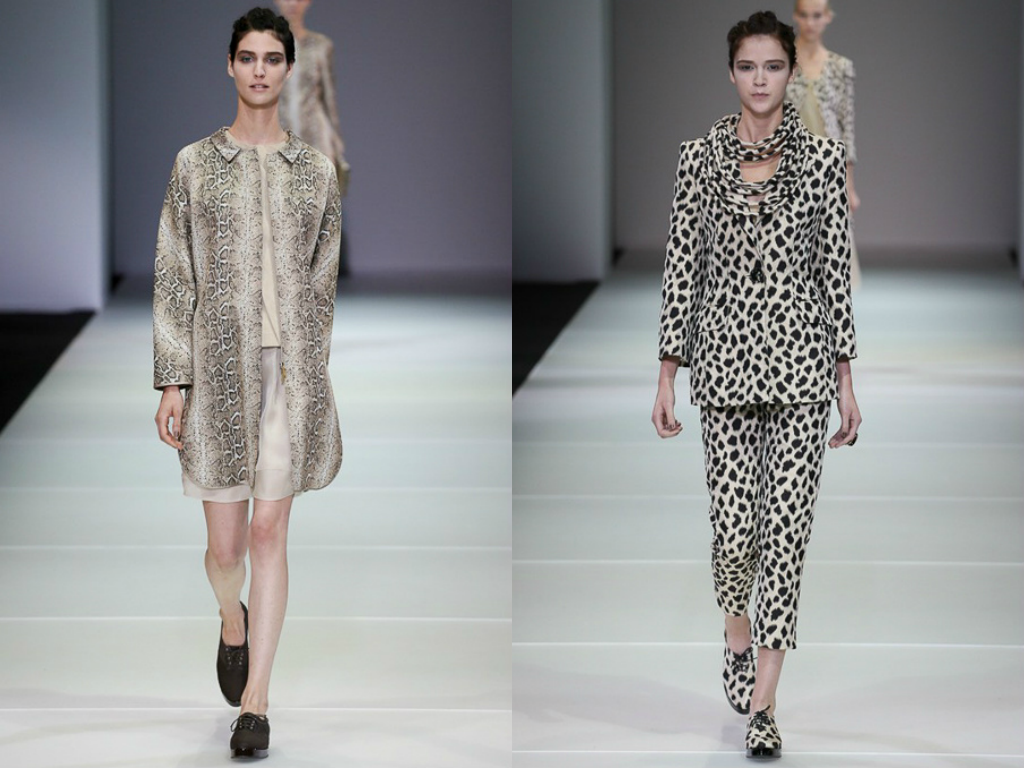 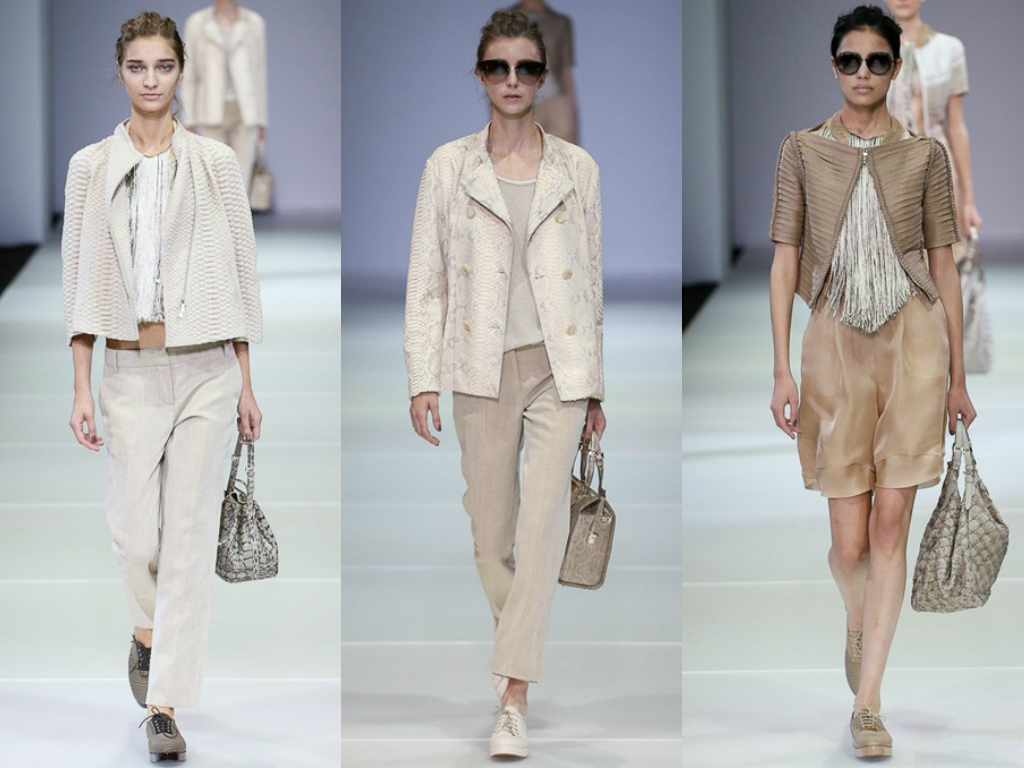 Spring 2015 is no different than really any of the previous collections except that you would be hard pressed to review a collection like this and not use the words minimal, tailored, soft and so Armani. For me this never gets old, it only gets better and better as Armani is just a master of his art. 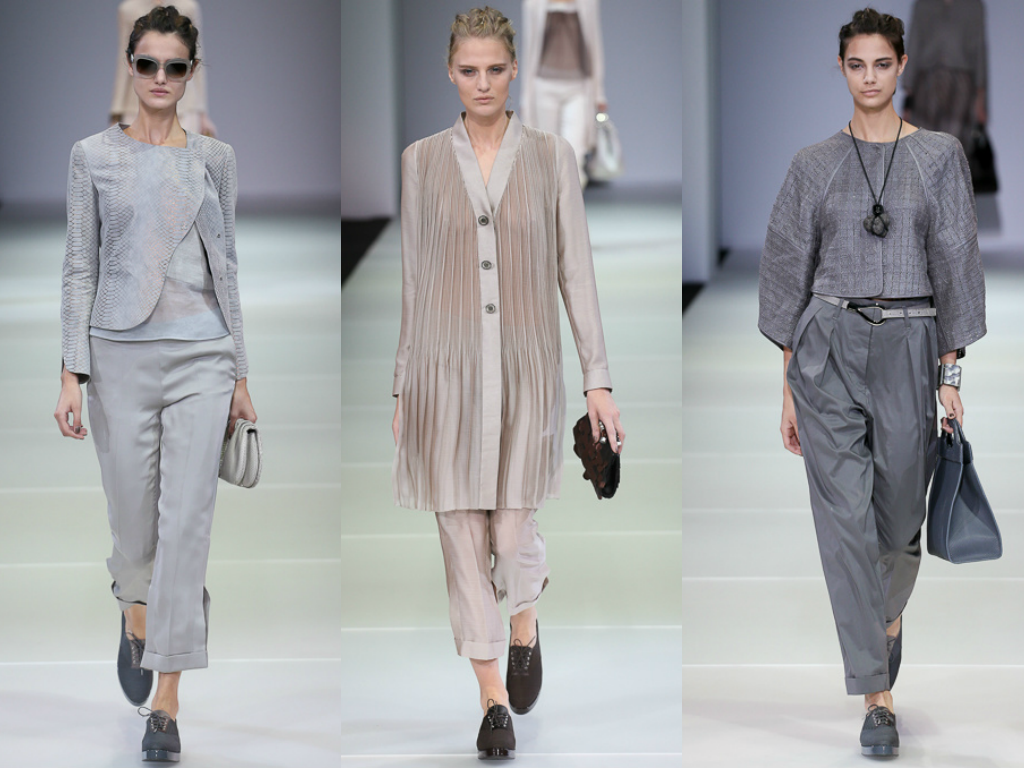 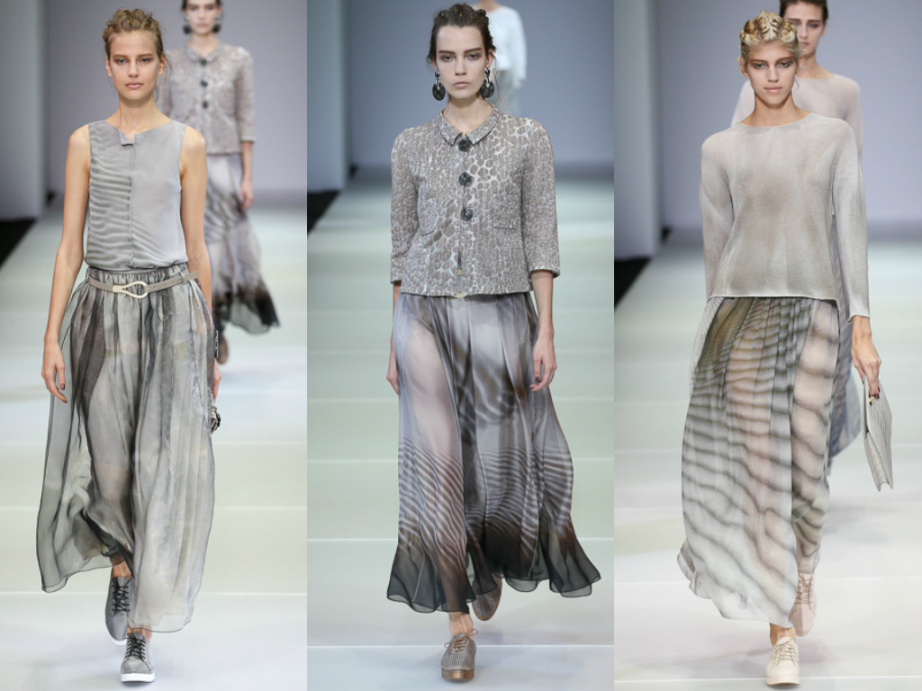 This season’s offering is all about rounded edges and curves, few if any hard edges and a palette that only he can apply with great skill. The snake skin and animal spots are amusing, the shadow stripe is ethereal, and subtlety is the name of the game. Organza shorts and double layer organza pants are totally impractical but so beautiful, and all the amazing tailored jackets that seem to weigh nothing and yet contain all the details that a finely tailored garment should contain.  The collection is minimal in accessories but never looks unfinished or that it needs more. These clothes speak volumes. 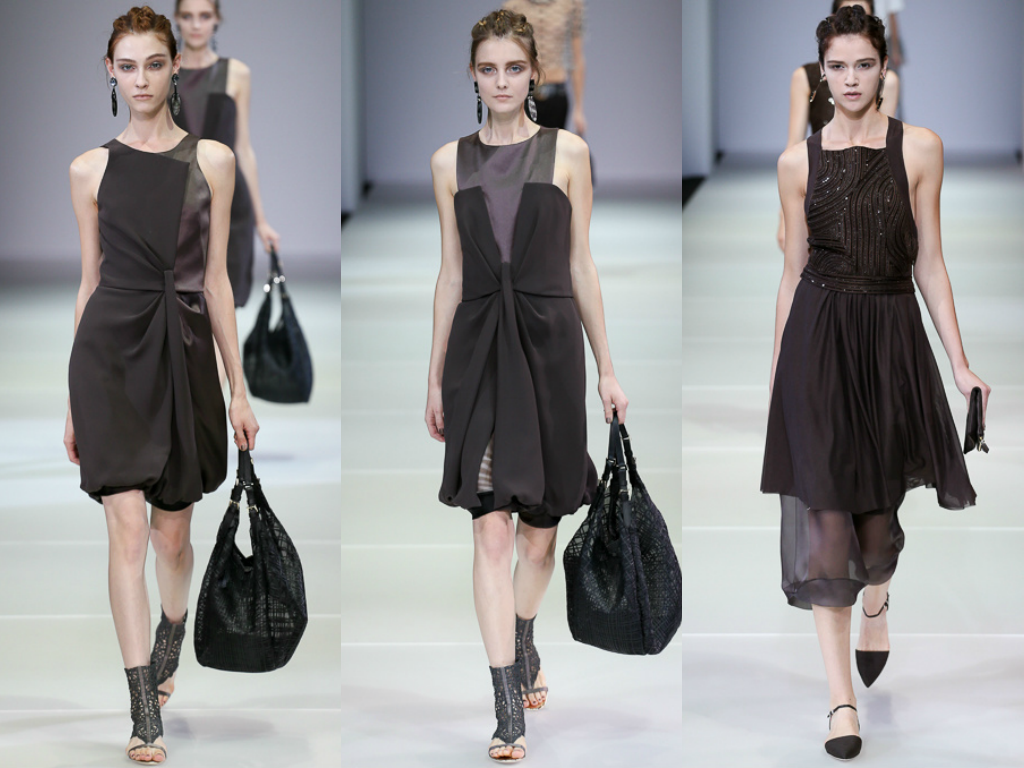 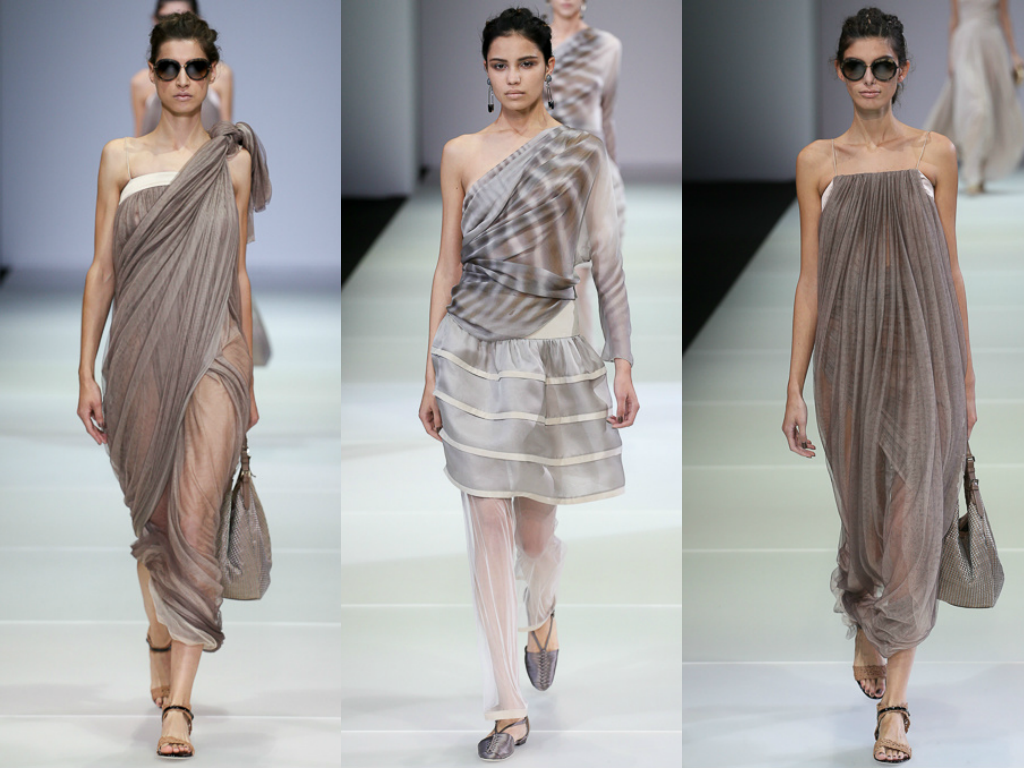 Then there were dresses, long and short of the Armani kind. He offers his take on glamor and red carpet in the most sophisticated and understated way and yet one might even perceive some of them as over the top, just not in a typical way.  PS … the last exit was bit too Darryl Hannah.. ya think??
Suffice it to say, you love it or you hate it, either you agree with his design ethos or you don’t, but in this time and space this man is a leader and an icon no matter how you slice it. 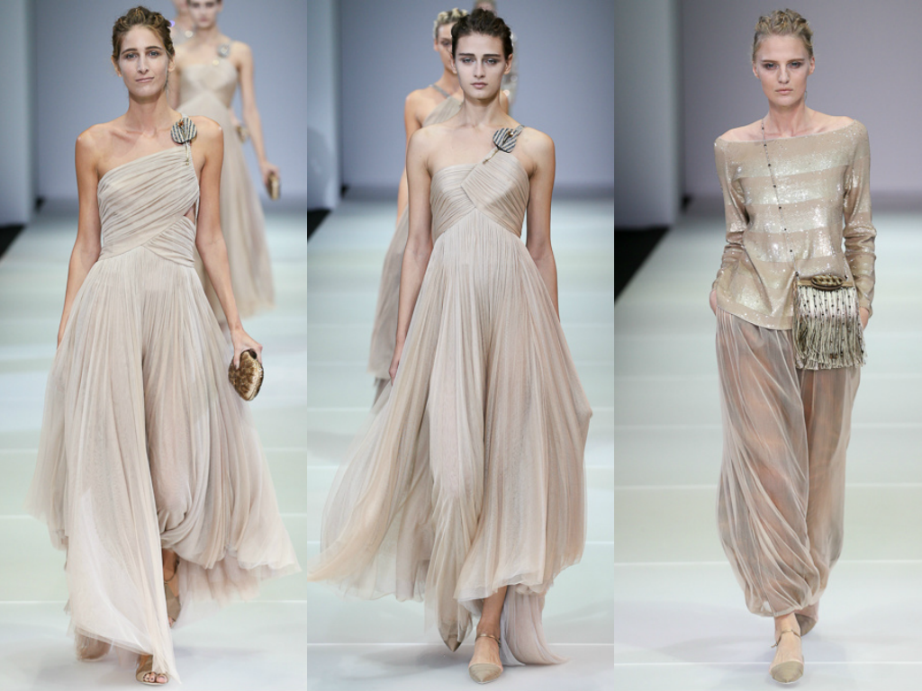 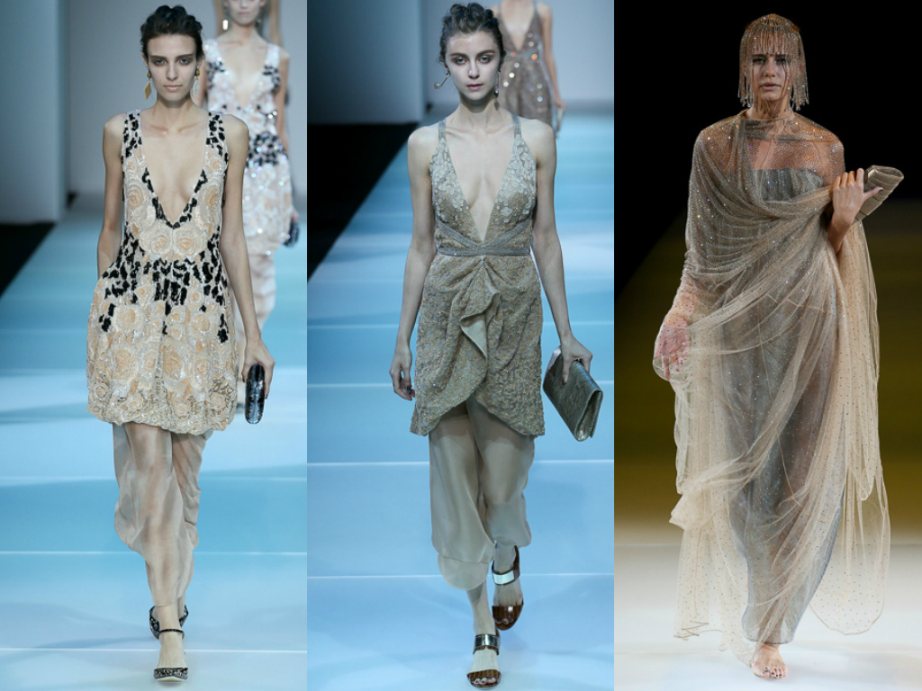 One last thing … my biggest disappointment was the belt he chose to accent many outfits as it is most definitely the Elsa Peretti horseshoe belt that she did for Halston way back when.
Posted by FASHION BY THE RULES at 12:42 PM