About 6 months ago Raf Simons stated “when I am married to a house, I will fully embrace its original intention, its original heritage and meaning.”

Well it sounds good to me and in fact to some degree he did adhere to his words but with not much more than a “pretty clothes” result. The Spring 2013 collection has some very beautiful clothes within but if one was looking for a revelation or an explosion of fabulous, and then you were sorely disappointed, as was I to a great degree. Mr. Simons is in in the unenviable state of literally being in the “hard act to follow” position coming on the heels of Galliano and the short stint of Bill Gaytten. To say that the previous 2 designers had a flair for the drama would be an understatement, especially Galliano, but what has ensued after his departure and Mr. Gaytten’s is a bunch of clothes that seem to have some of the DNA of the house/brand but without any fanfare, interpretation or drama at all … that is if you don’t count the media hype.

This is a difficult review for me as I rail against the “unwearability” of so many pieces that appear on runways and yet here we were presented with very wearable clothes but not much more. There were no "AHA" moments here nor were there any moments of wild abandon and instead we got some pretty clothes, some exquisite tailoring, a little New Look, some trapeze and some strange embroideries. The lengths were all over the place from barely legal to ankle and the silhouette was close to the body for tailored and looser for sure in dresses except for the New look pieces.

The opening sequence of jacket homage was indeed impeccably finished but there was no great news there and then there was the proliferation of “cage like” dresses and various interpretations of the A Line or trapeze shapes. There were a few brightly colored pieces which looked beautiful and it is unfortunate that they were not expanded upon as was the case with one standout strapless navy/black dress with tulle skirt and high low hem teamed with a mirror image heat shaped bodice. Even the tailored and more severe pieces might have cast a different tone on the collection had there been some color added. The metallic fabric used in the lineup seemed oddly cheap and ill-suited as a partner to any other fabrics

It is possible that this is all part of process of making oneself at home at Dior. Though I was not a consistent fan of Galliano, I was always a fan of the house dating back to Marc Bohan, Gianfranco Ferre and the namesake. So, maybe I do miss the spectacle and the unbridled excess that had come before Mr. Simons but that does not negate the ennui of this collection from a legendary brand that holds far more promise and finesse than what was seen today. 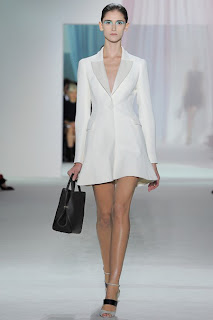 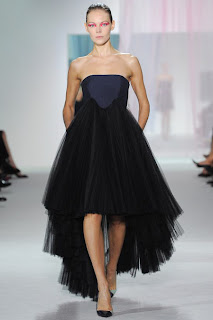