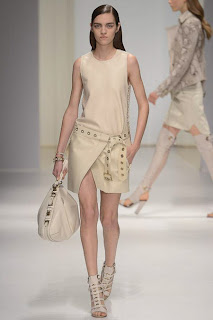 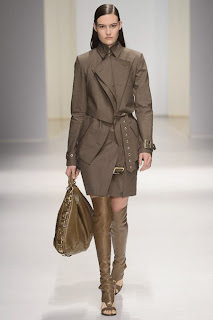 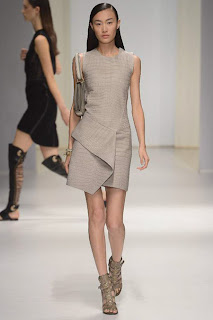 Dios mio! It actually happened; real clothes appeared on a runway before the collections ended for the season.  Signor Giornetti delivered one of the few, maybe only, collection that paid homage to the brands DNA and also gave us “real” clothes, you know the kind, the kind that someone might actually wear and even better … might buy!  I was beginning to think that the Milan collections would end with a thud but Massimiliano saved the day … well sort of.

The beige pieces were anything but beige in personality and the trench theme was employed with great finesse.  I was especially taken with the beige croco dress and several of the trench styles including some on black.  Yes, there was the requisite origami folds of the season which I wish were seen in less quantity as was the amount of black which blurred the season a bit.  I sense a greater leaning  towards more luxe materials which might be a continuation of the resort collection.

The one feature that I wish had been omitted was the “fishnet” effect that was employed in mid riffs and as sleeves and tops; for me this was a bit cheesy for a collection which has raised the bar for chic in past seasons.  And, if one was to continue to wish, I would have wished for more color as Mr. Giornetti has displayed great skill in infusing color into his collections.

I feel like a beggar who has been tossed a few crumbs now that there is a collection that celebrates wearing clothes and not just staring at them or showing them as if they are only to be observed rather than worn.  So, all in all, this was not Mr. Giornetti’s greatest performance but it sure was worth a bravo or two when compared to what has populated the runways of the past 5 days masquerading as wearable clothes!

Posted by FASHION BY THE RULES at 6:22 AM