This is the kind of collection that one waits for in Paris. The collection starts off tailored and pretty, yes the defined shoulder is most definitely back, and then it slowly morphs into an exquisite parade of dresses.

As there has been in a majority of the European collections, the Japonisme theme is displayed via the kimono details and cardigan closures as well as the obi like waist closures and waist bands albeit Mr. Elbaz does manage to tweak these elements just a bit to make them more Lanvin rather than seasonal trendy. The tailoring is sharp without being overbearing but there is no question that when it comes to knowing what his ladies want, he just pours it on without any hesitation. 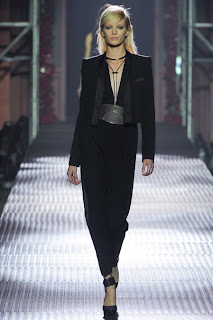 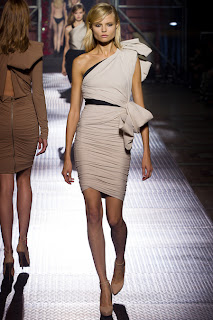 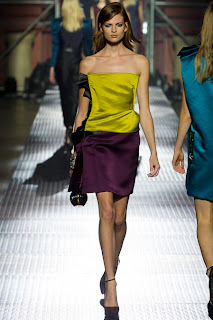 The second half or what seems like an endless segment was all about dresses and all about sexy whether the dresses were covered up or simple and of clean line. Mr. Elbaz has built Lanvin into a powerhouse with his take on feminine and this season was no different. What remains etched into my memory is the sight of those sexier than sexy shirred and draped dresses and then the jewel tone dresses that followed and became an unbelievable moment of the runway. The colors and then the combinations and the sheer number of them was memorable, no matter what the season nor who the designer, but the message is all the more potent as it was Mr. Elbaz and it is he who knows his way around a dress!

No question, hands down, this is a highlight of the season which is fraught with possibilities and after an apparently lackluster Milan with few exceptions, Paris is providing an awful lot of AHA moments and it has only seemingly just begun. In other words if there were Oscars nominations for best collections this was amongst its top 5 nominees. We need to see what will play out in the very near future …
Posted by FASHION BY THE RULES at 6:19 PM