Well it was just another season at Jean Paul Gaultier … business as usual here. Ever the showman and ever the one to display his bag of tricks in a new way and so today it was all about music and musical icons: Grace Jones, Madge, Boy George, David Bowie, Sade and Michael Jackson.

This season’s stars were the celebrities in varying reminiscences of Gaultier’s golden eras. From trench coats to jumpsuits to nautical stripes to raffia to fishnet to Japonisme to deconstruction … they were all present and accounted for in what might be a greatest hits collection. I say that is the most complimentary way as Mr. Gaultier always seems to be current even when he trots out what may be familiar to the seasoned fashionista; someway these greatest hits look new to those who have never seen them before.

Lest us not forget the sliced up suits, the pinstripes, the denim and men in heels with spandexed bare chests and all the other antics that Mr. Gaultier manages to squeeze into his 15 minutes “short subject!” One thing for sure, as I said, he is the ultimate showman who shows off his skills no matter how much of a distraction the production or the inspirations might be.

His serious side is reserved for the Haute Couture and we must never forget he needs to live up to his moniker of the being the “enfant terrible” of French fashion even though he is of boomer age. I look at very simply as he has put in his time, he has survived the ebb and flow of fashion for 30 years or so and this is his fun …VIVE JPG! 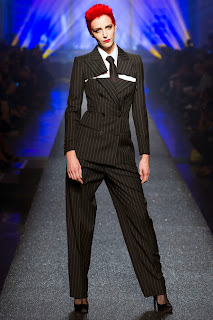 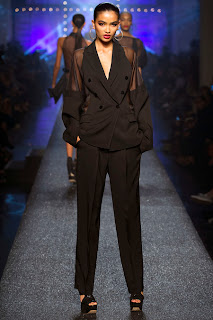 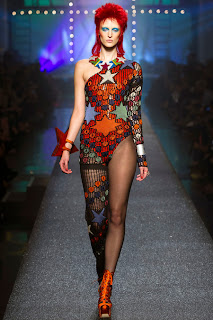