Talk about ending on a low note!  After an almost interminable roster of shows that spanned 2 continents and seemingly endless weeks, the Spring2015 season has ended. It is sad that I want to say something positive here but all I can say is that Hedi Slimane is consistent and that is nowhere near a compliment, just a sad fact. 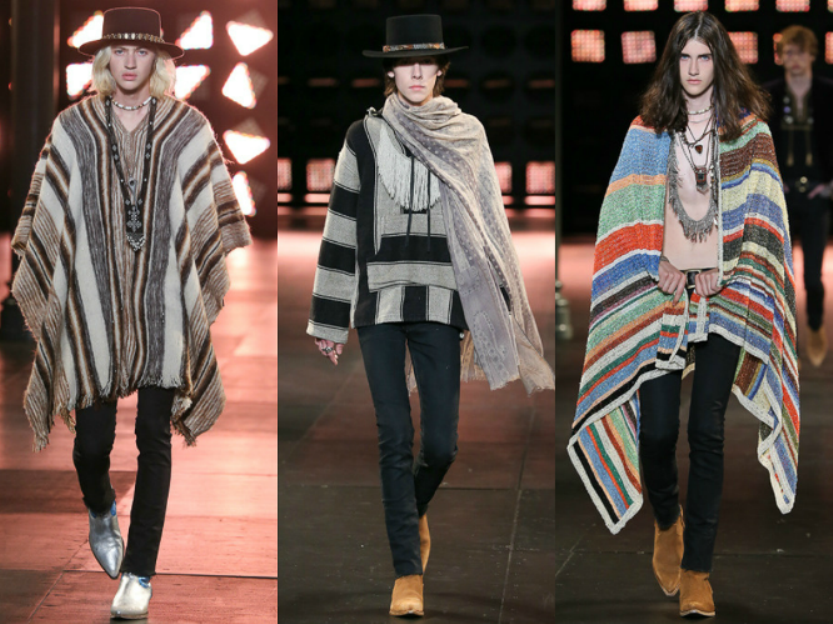 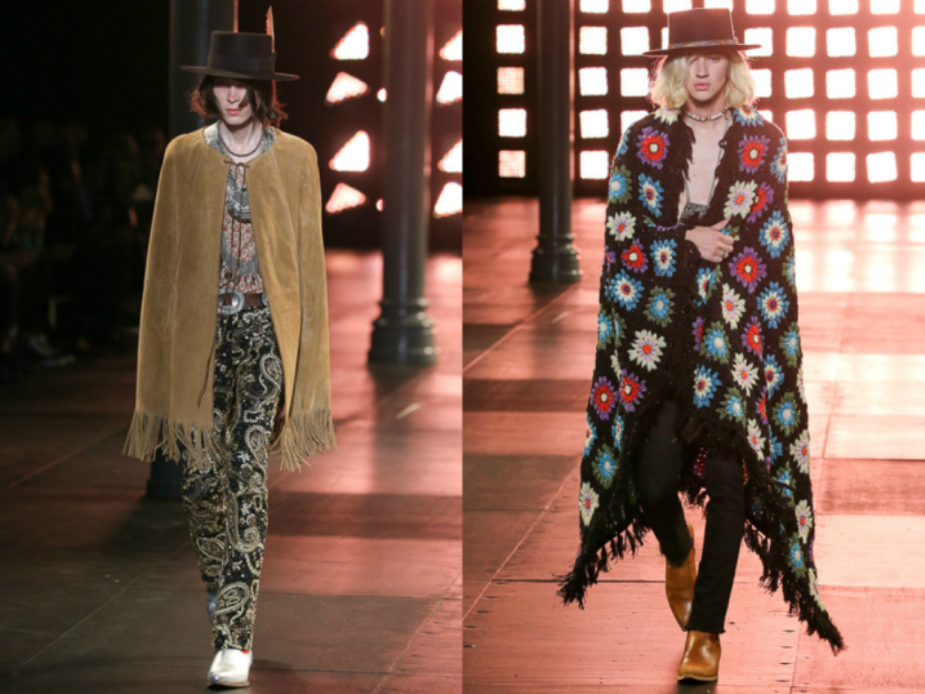 I have spoken many times of Donatellamommamia beating the already dead horse and Mr. Slimane is doing the same albeit he does it with more and more absurdity. To say that these clothes are referenced is quite hysterical. To say that he hasn’t had an original thought since he started turns out to be a statement of masterful understatement? To say he has narrowed his audience is beyond factual as well as laughable. 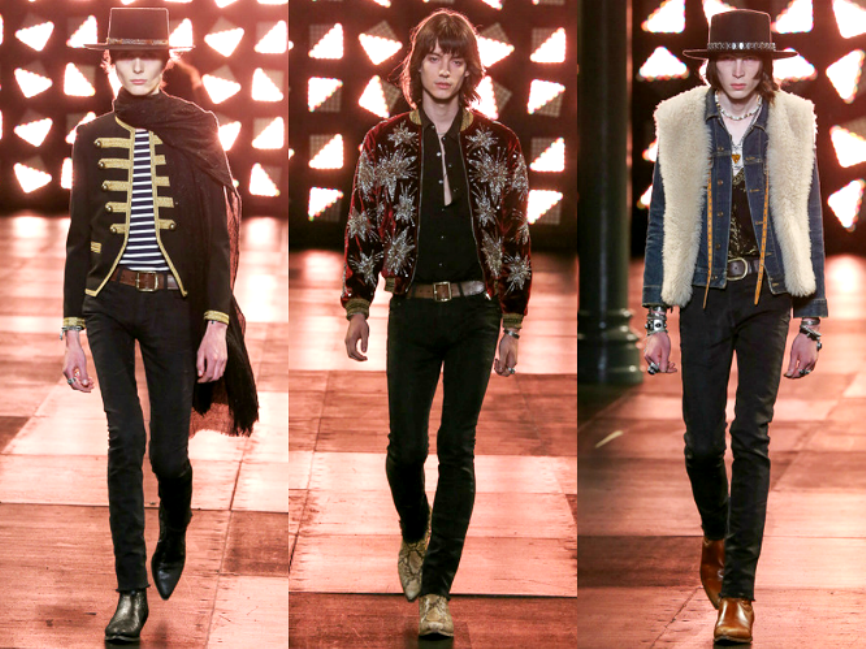 I am shocked that he did not try to spin this pile of thread to the rioting in the streets of Paris when Yves first began. Alas, that whole pretense of referencing the late designer and the DNA of the brand has flown out the window and now, we have Saint Laurent which would have been far more aptly named Hedy’s Delusional World of Fashion. As has been pointed out already by many, ponchos and crocheted afghans with fringe, roach killer pointed boots, levis and anorexic tattooed pre-pubescent heroin addled boys are not exactly what one thinks of when they think of fashion. Many of these so called styles are merely retreads of thrift store finds and some may even say that there is some Rifat buried in these relics of times gone by but no one with any fashion intelligence will say these clothes are original. He might have even mentioned Talitha Getty but then again he “invented it all ” so no need. 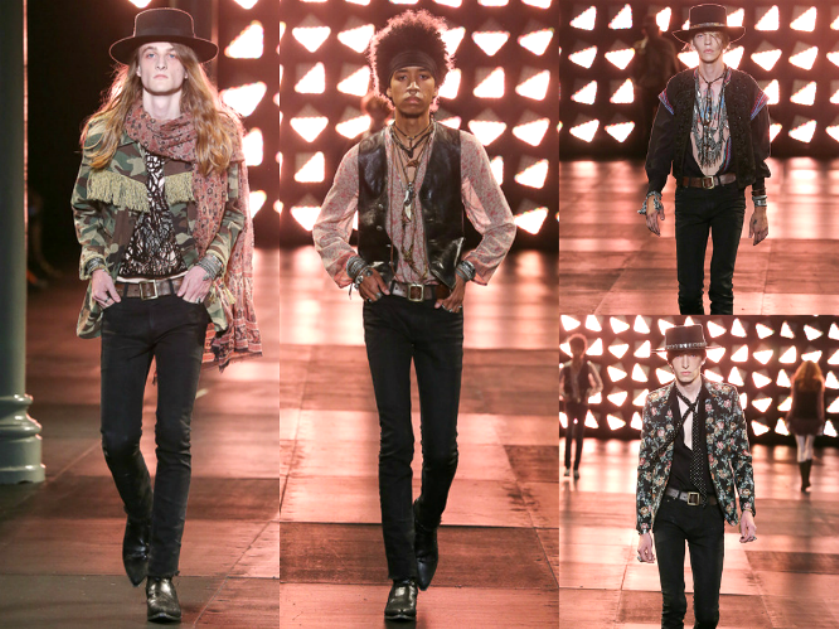 A little aside here --- if this is Spring will Fall be cut offs and crop tops?

Mr. Slimane might be compared to the theatre of the absurd that Thom Browne offers every season except at least I can marvel at what must be involved to create the horrors that Mr. Brown shows. Mr. Slimane is the aging rocker who needs to get over himself, his fantasies and this phase that has now become a fixation. Besides the so called fashion esthetic that is involved, these clothes are seriously ugly no matter what and no matter how one spins it and laughably presented with all the pretense he seems to shun. 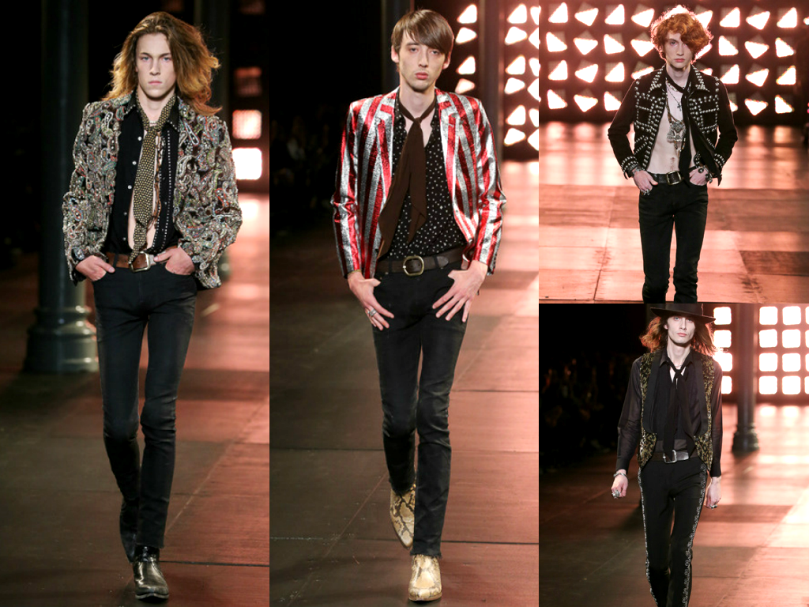 Rather than rant on and on over this crap, I wonder time and again why the name has been perpetuated. Slimane has taken the product so far afield that no matter what anyone tells me, I find it very hard to believe that these clothes sell to any great degree... between the so called clothes themselves, to the stratospheric pricing to the target audience... Where is the appeal and who has the budget? Maybe I just underestimate how many fashion victims there are who are willing to starve to look like this! 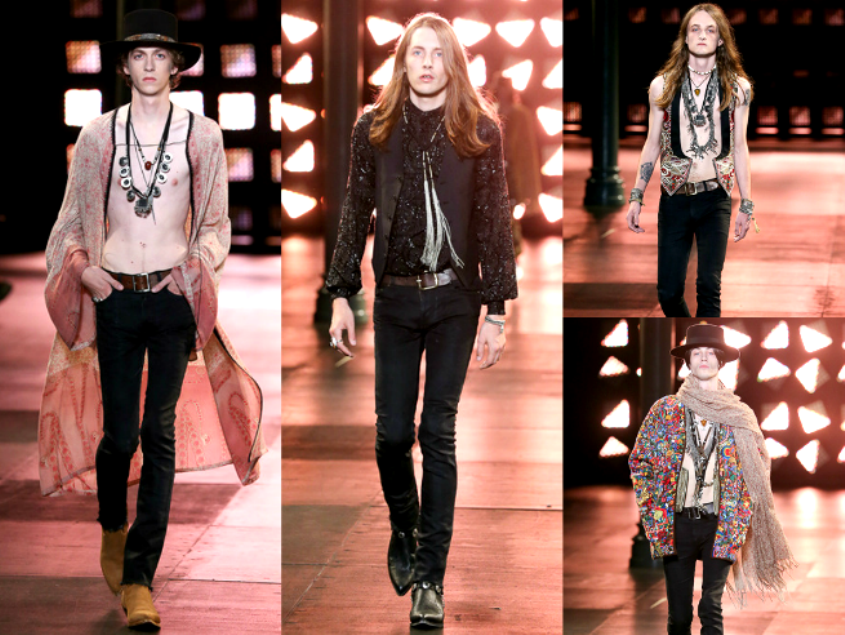 PS.. on a humorous note.. the camouflage jacket with the tatty bouillon fringe reminded me of Gone With the Wind.. Hedi and Mammy must have gone to the same fashion school!
Posted by FASHION BY THE RULES at 8:00 AM