So far we have seen loads of tailored clothes, endless amounts of outerwear and unfortunately there is a lot of sameness that is permeating the Fall collections so far.  So today, I thought it would be fun to point out some of the more memorable moments from the past few days.  Keep in mind this is not necessarily in a good way… as the Italians say... si vini un paio…si perde un paio… look it up!

Burberry Prorsum brought some news to the men’s wear area by adding animal prints to the world of plaid and I gotta say kudos to Christopher Bailey.  He single handedly did what no one has done to day and that is take a stand, albeit a t time a bit over the top but even if it doesn’t sell for men , it will bring in the ladies who will want all of it.

Prada, of course brought more emperor’s new clothes as usual so no surprises there and Moncler Gamme Rouge decided to take on the Chanel pre fall collection and out plaid Karl in such an over the top way as to be considered comical.  Then there was Calvin Klein who just bored you to death with nothingness and D Squared who decided to redo last fall’s Prada collection to the point of ridiculousness.

Jill Sander offered up more of her signature yawns with the vey useful addition of tunics, and oh yes sleeveless bi-colored and pinstripe tunics for fashion victims everywhere.  Wonder boy Raf Simons borrowed the Ferre tied neck and used it for men and brought not much new to the table...again!

Ports 1961 brought one of the slickest sharpest coats around to an otherwise so so collection and Hardy Amies took a shine to the color blocked outerwear in great style.  Speaking of color blocking, it should not go unnoticed that Iceberg even got into the act with a couple of fabulous sweaters and coats. 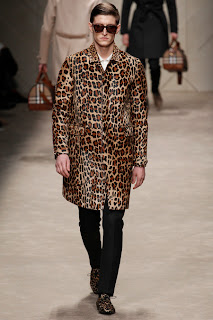 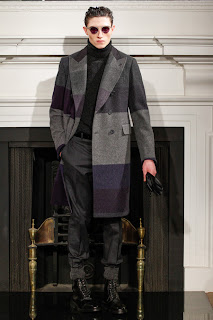 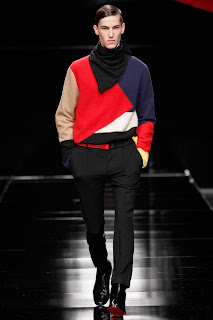 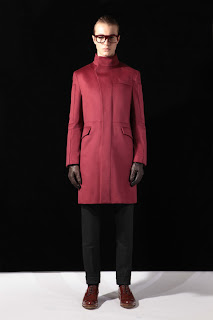 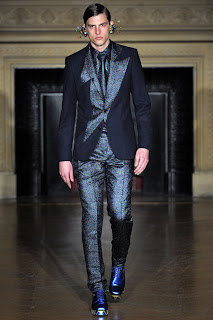 Lastly, Mugler  finally sort of concentrated on what  it does best and that is tailored clothing  with all the clean lines as they are otherwise producing super hero costumes  and Gucci showed us 1001 variations on a suit and pea jacket while the rarely spoken of Walter Van  Beirendonck showed some of the most wonderful “fashiony” jackets.  WVB is a master of his art who at least has the guts to really be original.
Posted by FASHION BY THE RULES at 2:10 PM