Rami Kadi may sound like a menu entrée but this is the name of a new designer from Lebanon who has entered the world of Haute Couture.  As a neophyte in this rarefied world, Mr. Kami demonstrates extraordinary skills but requires some restraint as this collection is at times pitch perfect and then  at times way too over the top in every way.

As I have stated previously over the last week, couture must be shown one a t a time so as to show each piece off to its best advantage.  Mr. Kadi surely needs to do this as between the clothes and the venue, one can experience visual overload instantaneously and repeatedly.  The surroundings are way too baroque for such dresses despite its grandeur and luxurious atmosphere.  The visual tug of war is palpable.

I think one must address the strengths here which seem to be Mr. Kadi’s skill in draping which have gone beyond just draping to the art of origami with multiple folds, festoons, swags and such.  There are some exquisite pieces here but a little self-control would go a long way.  With all the color and the patterning and jacquards, the designer really needs to decide where the focus is here which should be the dresses!
What is very disturbing is that some of the models seem to be standing on stools so that the bottom half of the gowns do not puddle on the floor which eerily elongates their legs to non-believable proportions.  I can understand that he wants to show off the dresses to their fullest but again... Restraint! And in this instance ... common sense. 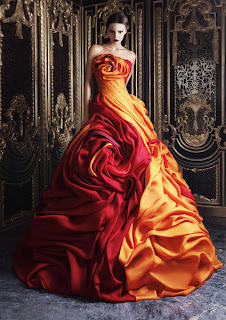 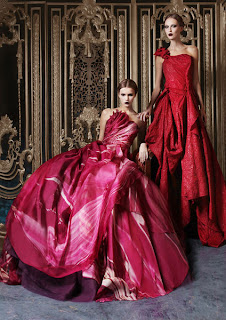 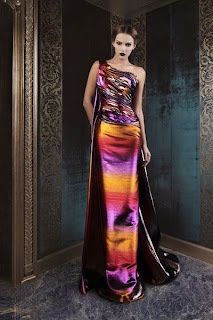 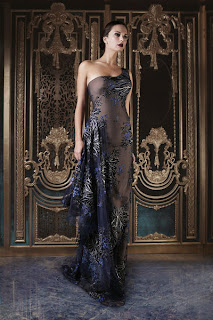 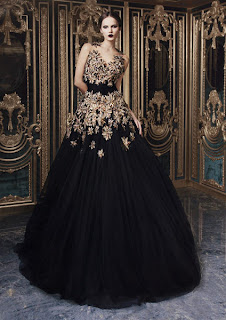 Within this vast array and assortment of dresses, there lies jewels, somewhat in a way of unset stones.  There needs to be some clarity in direction and some editing so the designer presents a clear cut vision of his design philosophy.  If he wishes to participate on the international stage of couture, he must certainly  lighten the Middle Eastern influence.  I am hopeful that Rami Kadi is a name who will become as well-known as his fellow Lebanese designer Elie Saab who has certainly mastered the art of couture.
Posted by FASHION BY THE RULES at 1:56 PM