Let me start  off by saying I am an Armani fan so if it sounds like I am fawning,  well get over it, you have read worse fawning  from  more influential critics than I and about far worse and more over rated collections than this!  Mr. Armani can always be depended upon to be Mr. Armani … true blue to his DNA and yet traveling his own path for his client.

One would be hard pressed to have not noticed all the black, the softer side of his tailoring, the profuse amount of pants, and the use of sheer black hose with the skirts and dresses and most of all ... His quirkish Armani-isms that creep into every collection.  The quirks are usually a shape or design idea/nuance that will be over looked or dismissed.   What designer hasn’t offered up a misstep every now and then although Mr. Armani has occasionally been one to press his point and weave that quirk or misstep into the core of a collection … like he did today with his vest like look!!  Do I really have to mention the incredible “make” of these clothes?

For Fall, Mr. Armani definitely believes in a softer and fuller pant, a shorter but softer jacket, flat shoes,  a bit of blue, a jolt of white and a more relaxed dose of chic.  He is the master of clothes that seem to barely touch the body, the essence of clothes that glide over a body and clothes that do not over power the wearer.  Do I think he is a design God? Yes! … Do I think this is the best collection since sliced bread? No!  What I do KNOW is that this is pure unadulterated Armani that will keep his faithful legions streaming through the doors of all of his stores worldwide.  After all, it is as I have stated so many times, this is neither entertainment nor theater, this is a business and the business is selling clothes! ... Despite what Suzy, Anna, Tom, Nicole, Stefano and the like might think.

Some will call this collection boring, some will call it safe, some will say Mr. Armani is not trying hard enough but I say that  if this is a less than stellar effort, well then, most designers would be thrilled and proud to deliver a collection of this caliber! 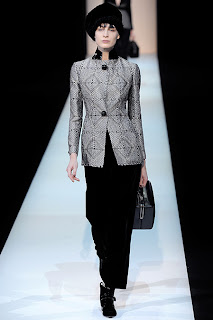 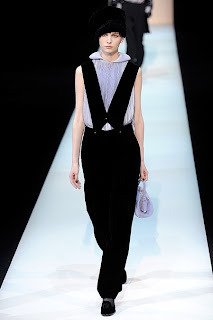 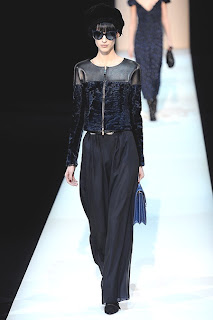 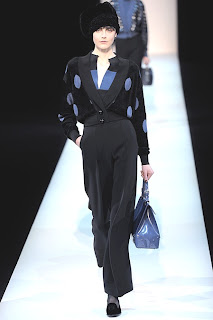 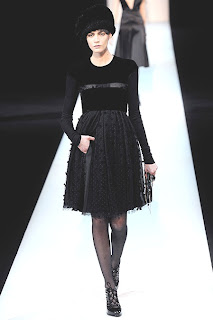 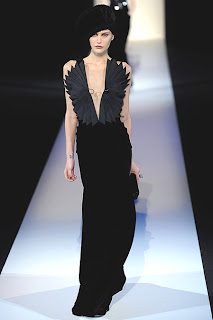 P.S.  my pants would be aflame if I said that the evening segment was of extraordinary beauty… it was a bit de trop on many levels… most of which would be of the quirk and misstep variety.
Posted by FASHION BY THE RULES at 9:15 AM