The 400 pound elephant in the room is John Galliano; as anyone knows by now, he has been present for the design process of this 2013 fall Oscar de la Renta collection.  So, now that’ s out of the way, we can move on to what we saw here as far as how deeply or how obviously the banished and disgraced Galliano has been involved.

From the opening salvo, first exit, you knew change was afoot here at the house of de la Renta.  The opening exits were most definitely the product of Mr. Galliano rather than Mr. de la Renta and as the show built, one could not help but notice there were almost 2 different collections being shown in tandem.  In my opinion, there could have been a much smoother segue than what we saw.  It wasn’t enough that that there was a seismic shift in the overall styling, there was also an essential element of every Oscar show that was missing... that being that these opening  styles and many of the obviously Galliano “touched” pieces lacked the clean impeccable finish that is a hallmark of de la Renta and certainly of Dior.  To my eye there was a, at lack of a better word, sloppiness to the pieces.  I suppose the result was intended to strike a note of softness and folds, draping and origami effects that Galliano made famous at Dior.  If that wasn’t enough, there were also the bias cut gowns which, to me, came right out of John Galliano collections of yore… the eponymous brand.  An overall polish seemed to absent and that is something that both designers have been long recognized for.

The matter at hand here is what did I think of this collection and the answer would have to be a very clear one… I am not sure.  I didn’t hate it, far from it… I didn’t fall over foaming at the mouth rabidly in love in with it either.  The question is very simply, is the baton being passed or are we just being teased so that Mr. Galliano’s return is not quite as shocking as it might be.  Since Ms. Wintour orchestrated this scenario, we do know this … these clothes will be heavily featured on the pages of Vogue come September and my guess is that the exposure is the quid pro quo for Galliano’s refuge at Oscar.  There were pieces that were unmistakably Oscar whether ball gown or daywear and likewise for Galliano.  There were clothes that were, for me, just silliness, clothes that were indicative of the 21st century brand Oscar de la Renta and then clothes which “had no home.”

Aspects that were very blatant, even though they were adjunct to the clothes, would have be those pertaining to the styling.  From the makeup, the hats, shoe colors, the hair,the jewelry and the layering of gloves, they all seem  to smart of Galliano rather than Oscar but my question that remains is “would just those flourishes have worked if the entire collection was designed by Oscar and his studio or did it have to be a joint effort?”  Time will explain a lot of this as well as when and if Mr. Galliano assumes a literally more visible presence at the brand. 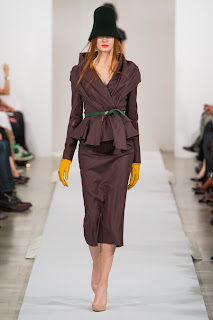 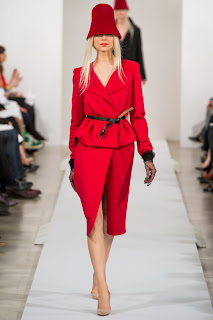 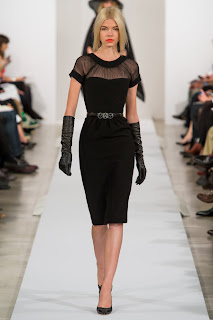 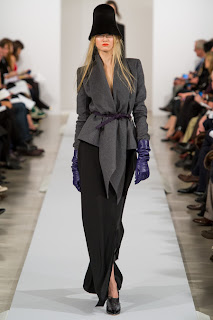 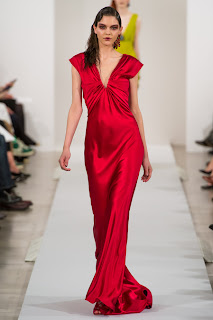 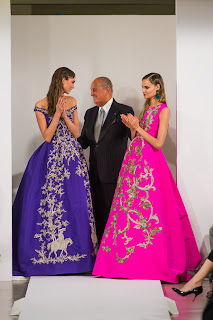 I would love to know what you think , but I caution you , do not opine based on emotion, dispense your opinion with intelligence and thought  about what you have seen.
Posted by FASHION BY THE RULES at 6:53 AM