Well it is not a happy moment when you realize a designer might have run out of steam or possibly has been influenced too much by what he sees and those around him.  Haider Ackermann blasted onto the fashion map not that long and won over everyone who had the last bit of taste and fashion knowledge.  The impeccable color sense, the mastery at tailoring, draping and layering all rendered at the platinum level. 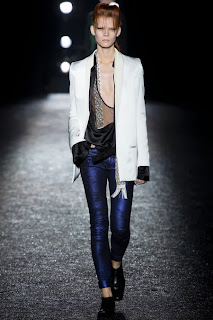 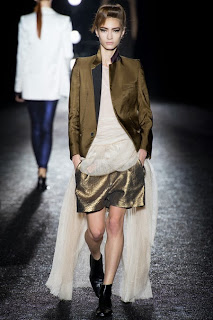 Apparently Mr. Ackermann and Mr. Elbaz have shared the same piece goods  room and remarkably have chosen “the international lurex festival” as their overriding option for Spring 2014.  Since my reviews do not pay much attention to inspirations and press releases … WTF are you thinking here? 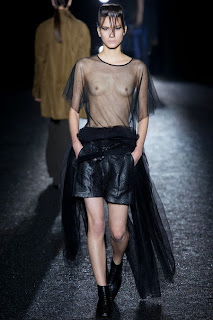 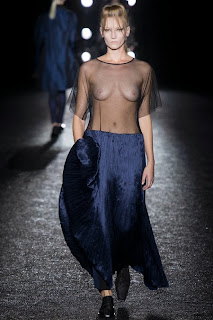 Yes I get it, you found your Capucci moment and yes you definitely took the time to show off your tailoring skills but jeez you veered off course with gratuitous transparency and over the top gratuitous sexy tops and other gimmicks that do not befit your original DNA. 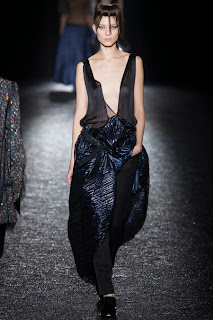 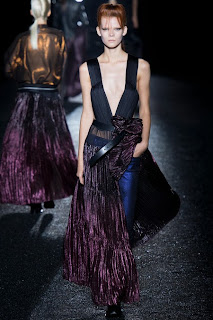 Do you think Cathy or Suzy or Shooting Blanks might know that those fanned out accents will hang straight to the ground once the hand is removed from the pocket or that lurex when mushroom pleated like that is as stiff as a board to the point of almost having a life of its own?? Well, do ya?? 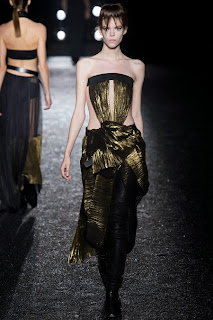 The Annie Hall 2014 version looked great in comparison to the rest of the pile but Mr., Ackermann is either trying to forge a new path or he simply pooped out and the answer won’t be known until Fall 2014.  There were a few all black pieces that looked exquisite but somehow out of place in a collection that would have used them as underpinnings in previous forays.

Once again, we have a designer who is either in transition or might be at a crossroads.  It will be interesting to see how this “fans” out... and yes, pun intended! BTW, do you think he had tulle fit??
Posted by FASHION BY THE RULES at 9:58 AM