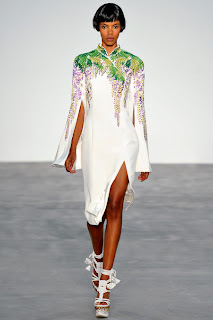 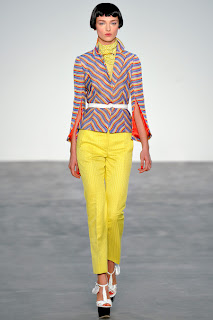 Well, Spring 2014 is no different except that she has chosen Japanese kimonos, ceremonial robes and even Japanese art as her inspirations and they have not necessarily served her well.  The problem with so called inspirations like these is the possibility that you will utilize them a bit too literally and so Ms. Scott did this season.  The obi wrapped waists, the slashed sleeves the full on kimonos as well as the embroideries heavily influenced by Japanese art and textiles all serve up the case for referencing one’s inspirations a bit too heavily and literally. 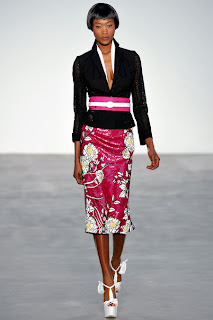 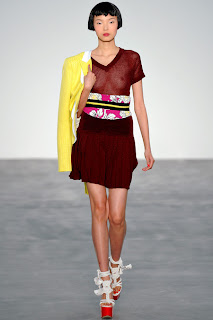 There are the sexy dresses and there are those little shrug like boleros but there are also so many distractions this season.  The saucer hats, which might be more YSL than Japanese inspired, the bad bad overly platformed shoes which I take as Ms. Scott’s interpretation of the traditional geta and the full on kimonos.  She even managed to evoke the long ago work of Roberto Cavalli in those purple leather pieces with gold embroidery; there was a time when Mr. Cavalli was known for printing intricate patterns in gold on suede ensembles. 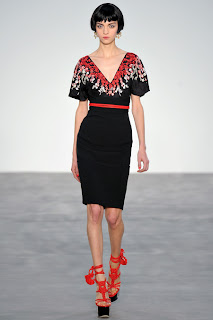 My take here, we are looking at clothes destined for editorial and the red carpet rather than for Mrs. Kleinberg from Shaker Heights who thinks it’s sexy to show off her fab over 40 body in second skin dresses.  Apparently there are times when one’s inspirations take over a collection rather than just influence a collection.  This scenario is especially dangerous if you do not possess the skills, imagination  and workrooms of one John Galliano when he was at Dior. N’est ce pas? 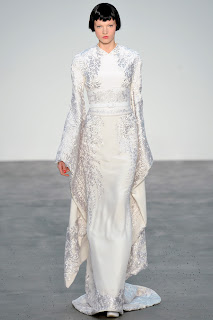 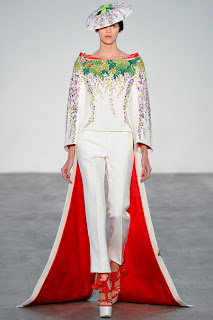 Posted by FASHION BY THE RULES at 9:40 AM