How can it be that Mr. Armani manages to stay true to himself, his brand DNA, his vocabulary and everything that you conjure when you think of his clothes and still be relevant, modern and evolved.  Possibly the key is the evolutionary aspect of his collections and how he redefines not industry standards of beauty, chic and taste but his own standards for those facets of fashion. 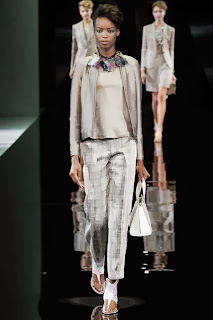 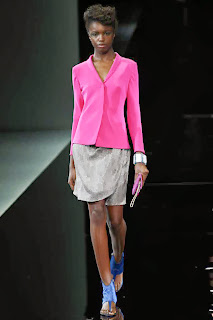 The shots of color are always welcome here as they are usually and today no differently,  pure and vibrant colors, never tacky brights, the addition of prints to his collections without ever overpowering the designs and the immaculate presentations that he offers season after season. 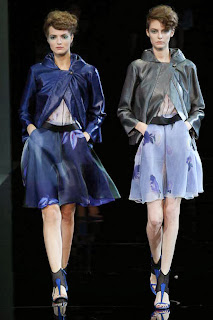 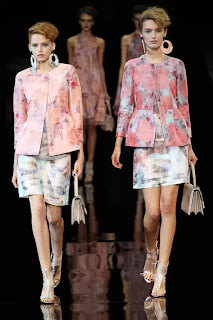 Of course, we have his perfect tailoring and this season, he gives us a run for the money with his versions of shorts/culottes/split skirts, the abbreviated yet not cartoonish blazer/jacket and why is it that when “everyone” is  doing transparent and his seems to be not a trend but integral to the design. 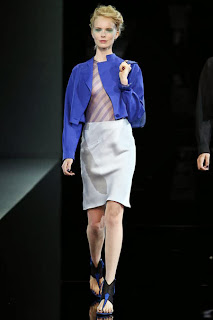 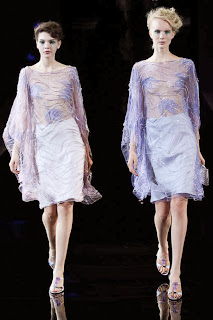 Yes, I admit I am a great fan of Armani, both for men and women, but there is so much to be said for collections that display polish and mastery.  His collections display such devotion to the art of fashion  and he consistently delivers commercial collections that are hardly  of the basic variety.  Granted, this Spring grouping will not set the fashion world on fire but god knows there are lessons to be learned from his perseverance and slavish dedication to retaining all things Armani. 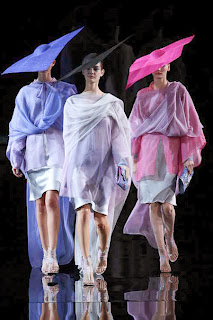 Mr. Armani employs the lightest of hand when he renders his tailoring and most certainly carries that through when he trots out his take on dresses.  Hard to believe that for many years he was unable to “design” a dress but that was not uncommon in the Milan Collections; many designed what I referred to as stewardess uniforms and tried to pass them off as day dresses but then came the concept of design studios and designers suddenly weren’t actually responsible for the design of every single piece of a collection.  Once design studios became de rigeur, the entire complexion of the fashion business changed and every designer who was deficit in an area of design was suddenly brought up to speed. 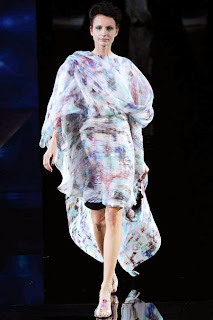 Indeed, the evolution of Armani has been revolutionary in a business that boasts change, touts newness and modernity as prominent factors that determine success.  Mr. Armani has catered to his clients for years, he delivers clothes that they want and wear  and he does not reinvent himself season after season which certainly isn’t working for so many designers that inhabit the current cast of characters in the fashion business.  Let that marinate in your head!!


One more time I get to say Brava Giorgio!


P.s>  the fassholes will be displeased !
Posted by FASHION BY THE RULES at 8:02 AM