This is a show that should serve as an example of what not to do when you want to do a show.  This was the quintessential smoke and mirrors of fashion; all about everything but the clothes. 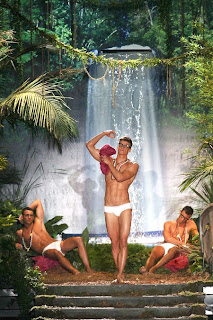 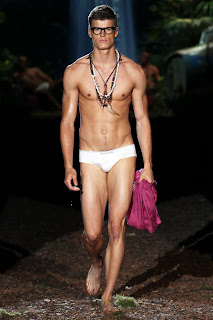 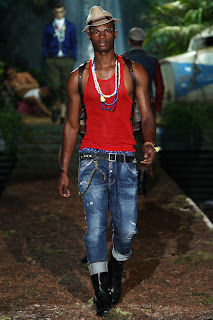 The underlying concept of a show like this is to distract and never focus on what on is important.  This is not an entertainment venue or event; people actually earn their livings in this business as do the 2 designers who seem more interested in being PT Barnum than they do in being Giorgio Armani.


Tank  tops, torn jeans, cotton briefs, bare chests, pink motorcycle jackets and cheap surfer jewelry don’t exactly in spire awe no matter how you spin it and then we have the cropped culottes or are they shorts or are the cropped pants or are they just plain one more gimmick?? Jeez it must be exhausting trying to come up with these sight gags and tricks to include within a collection of the Emperor’s New Clothes! 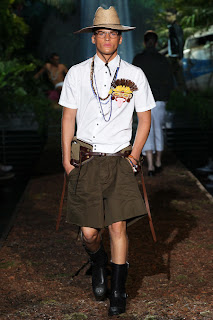 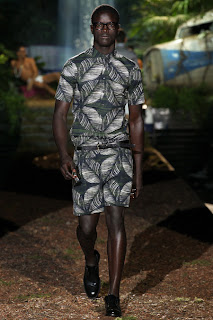 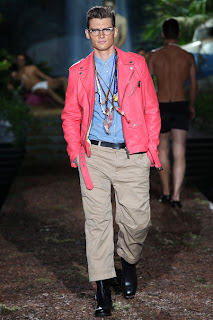 There was little redemption in the leaf prints which happened to have been appealing but only touched on as they might have been construed as wearable and then there were the 2 pieces in the cane pattern which just happens to be a personal favorite but again really meant nothing in the general scheme of things.


Here’s the take away here … GROW UP!! Or start designing for Forever 21 and H&M and Coin!  Clothes at these prices tend to be rather insulting to those who understand the business of fashion.
Posted by FASHION BY THE RULES at 2:21 PM