This is Dior Homme which has already been reimagined by Hedi Slimane and now by its present carrier of the torch, Kris Van Assche.  The process started by Hedi was at first revolutionary and by now, Mr. Van Assche’s collections are part of the new image and look so much more evolutionary than revolutionary.

The clothes are skewed to young men and women who require an edge in their apparel and not a screaming look at me approach to fashion. They also require a very healthy allowance, trust fund or executive position. To my eye, the shorts are bit too prevalent, but I do like the abbreviated squared off jacket/blazer.  The palette seems to be a bit too victim being so dark and moody but one can see the beautiful edge that the clothes have which is provided by the fine tailoring. 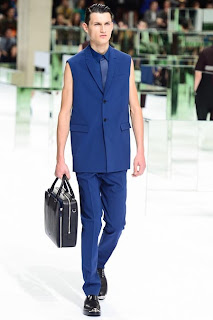 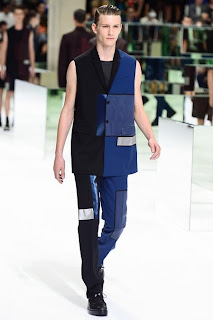 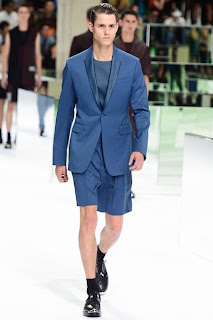 The Mondrainaesque design flourish is interesting but it certainly is not very new on so many levels.  Personally, the sleeveless suit is a favorite of mine, but that’s a highly personal choice.  What is so odd is that this collection, which has been so totally recast as a very young man’s collection, started out as a very older man’s collection that far outlived the design of its counterpart in ladies. 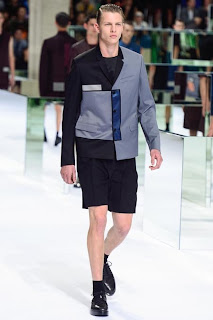 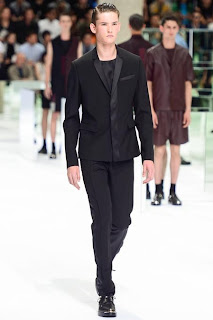 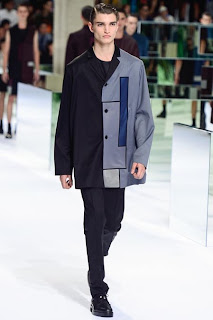 My take is that Mr. Van Assche has studiously developed his customer and rather than toss him/her away every season for some of the moment craze, he keeps them coming back to see the newest design FLOURISHES of the season.  If you recall, the words used are NUANCE and a massaged trend!

So… love it? …. NO! … Hate it? … NO!  But … there are plenty of pieces to fall in like with, which is far more than one can say about so many of the new collections that have been presented during the past few weeks.
Posted by FASHION BY THE RULES at 1:50 PM